I Knew Them When…

Longtime readers of QueerJoe have read blog entries about them before, but it appears that one of my favorite, relatively unknown, musical groups is going to play the theme song for a new HBO show, called “Juvies”.

The Churchills
They have CD’s published (“You Are Here” is my favorite), and they’ve had their music played on television shows before. But, they’ve never had a theme song that will be played each time a show airs.

Juvies is a new show that was supposed to debut already, but has been pushed back a month. It takes a little while to load, but you can hear the Churchills’ song on the HBO preview site here.

I don’t know why I get so excited when a band I’ve been listening to for over a decade looks like they might actually get discovered. They definitely deserve it.

Current Knitting
After practically boasting that the knitting has gotten easy, I had to un-knit three rows last night (only one of them was a purl row). My eyes were tired, and I just kept making a mistake, so I put it down for an hour, and then picked it up with renewed vigor, knit back 3 rows, and now I’m back on track.

Even the un-knitting has gotten easier.

I’ll post a progress picture in the next entry.

Other Fiber-Related Activity
I’m making some progress on the multi-colored merino roving, but it’s definitely not going as quickly as the Romney-like roving I was working on previously, so I’ll give comparative pictures so you can actually see the progress. 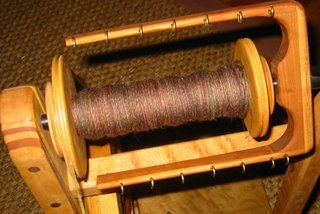 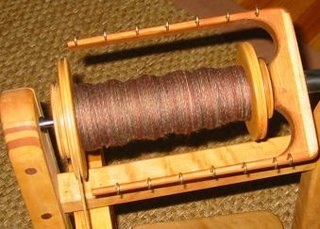 So, despite Ted’s exaggerated description of the speed with which I spin, it only goes that quickly when I’m spinning thicker singles and paying less attention to the uniformity of thickness.

Recent Movies
Thaddeus and I get to see a lot of movies. With Thaddeus working in a video rental place, and having no children, we can get to watch pretty much whatever we want, whenever we want to.

Two recent movies we’ve seen, one on DVD, the other in the theater, both have something about them worth seeing.

The first one is The Great New Wonderful. This isn’t a movie for everyone. You have to be able to enjoy a less-structured movie that doesn’t have a typical feel-good ending. There are many extraordinary performances from folks like Tony Shaloub and Maggie Gyllenhaal, but Steven Colbert has never been better than in this little gem of a movie.

The second movie is The Illusionist with Edward Norton, Jessica Biel and Paul Giamatti. There is also a wonderful performance by Rufus Sewell in the movie. Other than one flaw at the end, that both Thaddeus and I noted, the movie is quite well done and provides an entertaining time.

Readers’ Comments/Questions
Catsmum writes, “Hey Joe…Please … just for us fibre hungry bods on the other side of the world who don’t know… what and where is Rhinebeck? Oh, photos of or links to the e-wrap would be good.

I’ll let you read all about Rhinebeck on the link above. Below are pictures of an e-wrap cast-on. The first one shows it very loosely so you can see how the wrap is done and the second one a little more like it would look if you actually used it (note that mine is very uneven). 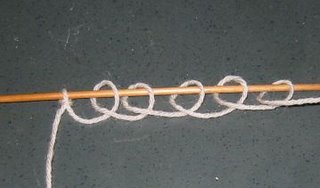 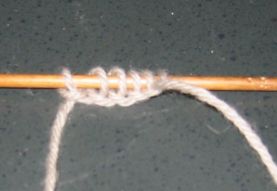