Where Do You Draw The Line…

…when it comes to separation of Church and State?

Tax Exemption For Churches
I have never been overly comfortable with special priveleges for churches. I might even say that I think churches ought to pay taxes just like any other organization. But, since I don’t really have a say in that issue, when are churches participating in activities that would legally make them no longer tax exempt?

Locally, we had a church that was charging visitors of the town to park in their parking lot during the week. Given that I live in a very touristy town, it was quite a lucrative business. When they were told they couldn’t use their property for such non-charitable revenue, there was a major debate in our community over discrimination and the like.

Now, a progressive church in Los Angeles is being threatened with losing their tax-exempt status because of a sermon given two days before the 2004 election. The offending section of the speech is:

“I believe Jesus would say to Bush and Kerry: ‘War is itself the most extreme form of terrorism. President Bush, you have not made dramatically clear what have been the human consequences of the war in Iraq.'”

While I love the sentiment of what this pastor had to say (even though it’s a moot point now), I don’t know if this crosses the boundary of “endorsing a candidate” or not. Since only one church has ever had its tax-exempt status revoked by the IRS (the church ran two full page ads against Clinton in 1992) was clearly engaging in endorsing a candidate, it will be interesting to see where the IRS decides to draw the line.

Current Knitting
Slow but steady progress on the Celestine Shawl. And no, I won’t be putting up a sheet in front of the window to photograph the shawl. Perhaps when I take the final picture.

Current Spinning
I did some additional work on the multi-color merino over the last week, and while the progress is slow, there is definitely a lot of wool on this bobbin. 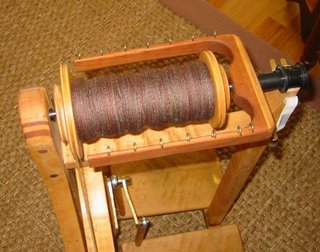 I’m thinking that I might try to teach myself how to Navajo ply between now and when I finish the singles for this roving, and ply it that way when I’m done. We’ll see.

Readers’ Comments/Questions
Regarding the picture of the bug, Aarlene writes, “I thought it might be a stink bug. After a couple of incidents I usually avoid getting close enough for a good id.”

Actually, I think you’re exactly right. The picture didn’t make it easy to identify, but when I look at pictures of stink bugs, that’s exactly what this bugger looked like.

Joanie R. asks, “Why a circular knitting machine? I never had one or even see one work. What can you do on it that you can’t do on needles?”

A circular knitting machine allows you to basically make a tube of knitted fabric, very similar to the leg portion of a sock. It just allows you to do it more easily. The picture of the one linked to in yesterday’s post

looks like it has 20 needles, so it would be like having a machine that could knit a 20 stitch tube of stockinette stitch fabric. Most of these machines allow you to make narrow lengths of flat fabric as well (non-tubular). Not really overly useful, but a fun novelty.