Gays Out Of The Military

It wasn’t bad enough that “Don’t Ask/Don’t Tell” was enacted, but even worse, they don’t even live up to their side of the bargain.

We Ask/Don’t Tell
How would you like to work at a job where you could never discuss a recent date, or your husband or your children, or a vacation with family or buying a new car, for fear your employer might find out that you were heterosexual? That’s what “Dont’ Ask/Don’t Tell” initially set up as an untenable law.

In the years since its enactment, a number of gays and lesbians have been kicked out after specifically being asked about their sexuality and either refused to answer or answered honestly.

Did anyone catch the Jon Stewart interview on this issue recently? Check it out on Andrew Sullivan’s blog.

Current Knitting
I’m up to row 340 on the Celestine Shawl. I’m hoping the next picture I post will be the completed body of the shawl, and I’ll have started working on the end section. It’s ambitious, but I can be hopeful.

Magazines
I had to stop at the grocery store yesterday, and found these two magazines on the racks.

Interweave Crochet has my friend Kathy’s hat design in it, so I needed to buy it. I don’t know what compelled me to buy another Vogue Knitting (“Hobo chic?…give me a fucking break.).

I found three things in each magazine that I liked well enough to mention on my blog.

Interweave Crochet
Believe it or not, I found a very nice design by Mari Lynn Patrick called Cinnabar Coat. I don’t usually like bulkier crochet, but I thought the design and shaping on this was quite well done. 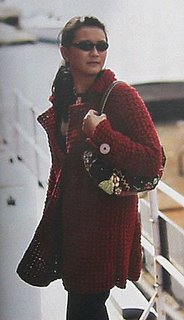 Again, another crochet technique I’m not overly fond of is granny squares. But Valentina Devine uses them very well by selecting great colors for her top call Boho Blocks Cardigan.

Finally, there was friend Kathy’s hat design. Looking at it, I was amazed it wasn’t done in knitting, and then I read the text and realized that was her exact goal. This hat is a classic, and any kid the age of the model would love to have this hat. Very current. 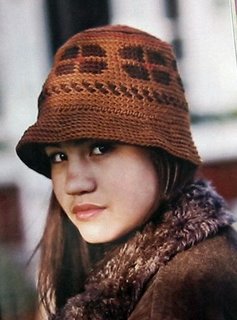 Vogue Knitting
Sasha Kagan has a very interesting (although hard to tell from my picture of a picture) shawl that I think is very fine. Mix up a bunch of Rowan yarns, and I guess it’s hard to go wrong, but no one does it better than Sasha Kagan. 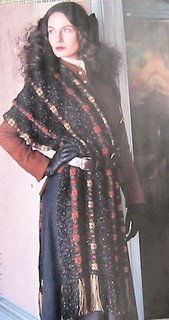 Except maybe Brandon Mably. This vest is subtly beautiful. Again, Brandon’s sense of color is offbeat and yet very appealing. He is becoming one of my favorite designers lately.

Finally, I thought this design by Wilma Peers was very nicely done. She selected perfect yarns and did the center panel shaping extremely well.

Thaddeus’ Mushrooms
Thaddeus went in search of a mushroom from his childhood that he calls “popinki.” His sister makes a soup with it, so he was looking to find some for her. I’m not a big fan of that mushroom, but I am a huge fan of this: 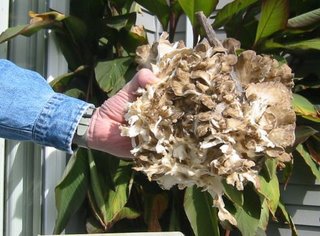 I know this mushroom as “Hen of the Woods”, but it also goes by the Japanese name of Maitake, and the Latin, grifola frondosa. We just had some for lunch today, sauteed in olive oil and butter with just a little salt and pepper. They were heavenly.