Since when did “I don’t recall” become a valid excuse?

Nothing Like A Good Sex Scandal…
…especially, a gay sex scandal.

When President Clinton spilled spooge on the infamous blue dress, the Republicans only needed a whiff of an excuse to put pit-bull, Kenneth Starr, in charge of a full-scale investigation (actually, he was brought into investigate Whitewater, but one whiff of a sex scandal sent him in a very different direction).

And now the republicans seem to have had a sex scandal waved back and forth under their noses, but lost their sense of smell for a while? Or did they just not want to lose an important Florida seat for the Republicans.

How can any true Republican not look at this, and without hypocrisy say that the Republicans have any sense of moral values, that they care about anything except self-serving purposes, they they aren’t power-hungry, immoral pricks?

Current Knitting
I finished the one edge of the Celestine Shawl, and now I’ve picked up the provisional edge of the other end, and I’ve just begun that side. 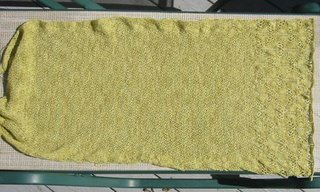 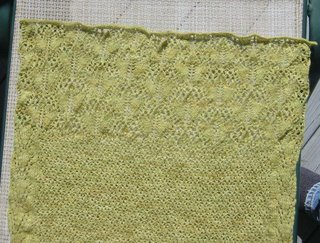 With the end in sight for this design, I need to take a look at what I want to work on next. Especially since I’m travelling during the week again, and need to plan in advance.

Roving Arrival
Carol S. of Black Bunny Fiber fame, has asked me to test-spin a sock blend fiber that she personally dyed just for me. 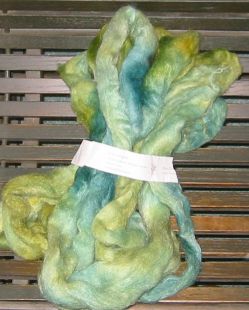 She calls it “Field of Popinki.” Popinki is what Thaddeus’ family calls a specific type of mushroom that he looks for when he’s foraging for mushrooms, and the color is just beautiful. I can’t wait to start spinning it.

It pays to keep checking Black Bunny Fibers. Carol sells all of her fiber almost as soon as it gets posted.

Readers’ Comments/Questions
Regarding my blog mention that we didn’t get Gage declawed, James notes, “Hmm you actually have the option of having cats declawed…In New Zealand it’s illegal.”

I have to say, we had our last cat declawed, and now in retrospect I realize that it wasn’t a great thing. We’ve found out since that in older age, cats who have been declawed have significant litter-box issues. Our former cat had issues that most cat-folks agree was definitely due to her lack of claws. I would never declaw again, especially when it was easy to train Gage to use scratching posts.