I’m not a big fan of surprise FBI investigations that seem to begin at incredibly inopportune times for politicians.

My Bi-Partisan Side Speaks
First it was Representative William Jefferson in Louisiana, and now Representative Curt Weldon of Pennsylvania. I would have thought a few weeks delay in the latest investigation wouldn’t have hurt the FBI’s chances of finding evidence at the daughter’s house.

Jefferson is a Democrat and Weldon a Republican, but both investigations coming during the heat of election season smacks of partiality on the part of someone determining the timing of these major news events.

Don’t get me wrong, from all perspectives, it appears both these guys were caught redhanded treating lobbyists more favorably than they should have legally, but you can’t help but think the timing might have been deliberate.

Even in a yellow prison shirt, this guy looks fine.

Current Knitting
I’m up to row 11 of 28 on the last pattern repeat. I’ve got a business dinner tonight, so I probably won’t have a lot of time to knit, but I’m still confident the Celestine Shawl will be completed and blocked before I leave for Rhinebeck.

Current Reading
I just finished reading my most recent book, and before I discuss my thoughts about it, I just have to say that I have no idea where this book came from, or how it got in my house. I’m running out of any planned reading, and just looking for anything I haven’t read yet. 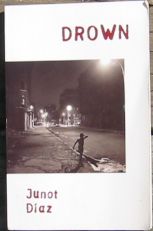 is a compilation of ten seemingly autobiographical stories of the author’s life and family either living in the Dominican Republic, or after his immigration to the states. Overall, I think the author writes exceedingly well, but I often got the impression he was specifically writing to a non-Latino audience. I felt like I was reading the tourist’s viewpoint of a barrio-latino biography. One of the stories of the narrator as a drug dealer in New Jersey seemed a little more gritty and real to me, and I found myself wishing for all the stories to have that tone, or none of them.

All that being said, I have to say, I found reading this book very engrossing, and I was glad to have read it. It was a perfect example of how I feel my life is expanded through reading in ways that it would never be in any other way.

While you check out Amazon to look at Drown

, you might want to look to see that Amazon is now selling groceries. As odd as this is, I have to admit I’m very excited, as they carry the coffee we use in our espresso machine

, which otherwise, we can only find at less-than-local groceries. It’s also cheaper.

Readers’ Comments/Questions
Kristin writes, “Argh. Joe, plz know that the evangelicals do not represent ALL xtians.”

I do know this. In fact, for a number of years, our next door neighbors were evangelical Christians, and we got along famously. They were some of the nicest neighbors we’ve had. Hate is hate, whether you’re a self-identified Christian, Muslim or Jew…and all hate should be repugnant.

Regarding the Black Bunny sock roving blend, Marilyn writes, “I’m spinning the same BBF blend and I find that it takes a lot of careful predrafting. This is most likely because of the mohair, which gets clumpy. But I love Carol’s colors.”

I’m kind of glad Carol sent this out as a test fiber to just Marilyn and I. I don’t know that some of her beginner-spinning customers would enjoy working with this fiber. I didn’t do any pre-drafting, and my resulting singles aren’t overly even. I’m still interested to see what this sock yarn will look like after I ply it and knit it up.