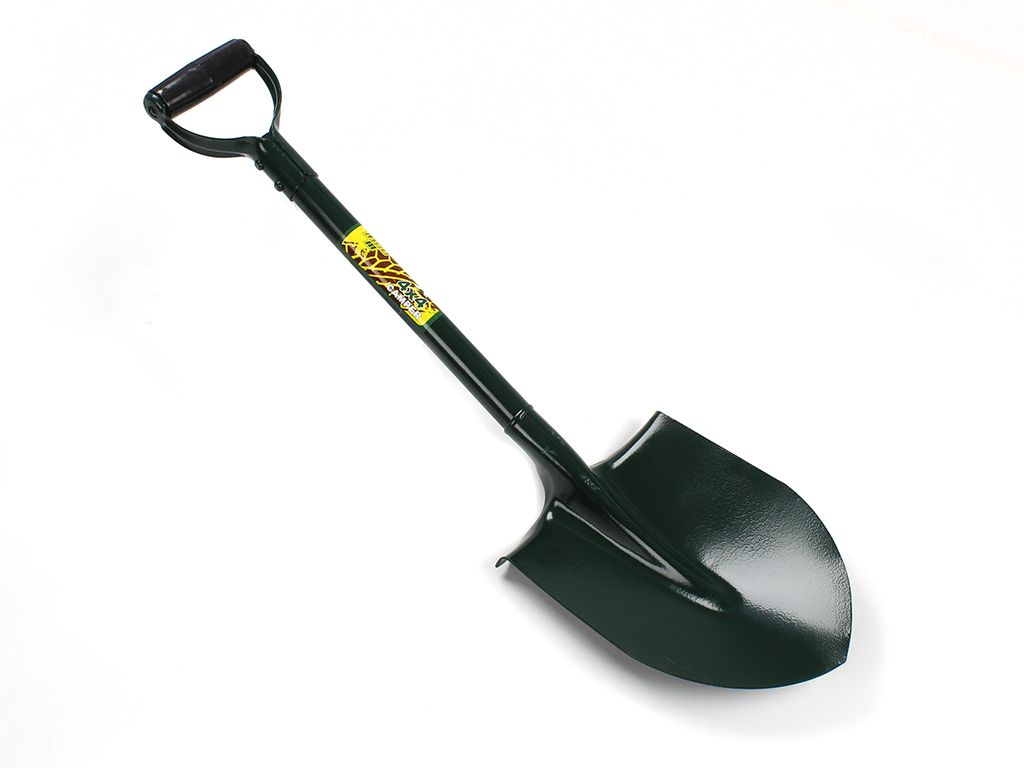 Calling a Spade A Spade

I recently tried to subscribe to an on-line community. I was told that I would have to change my online username from QueerJoe to Joe, but I was assured it wasn’t for reasons of bigotry or homophobia, it was because children under 10 would be exposed to my screen name.

It’s Still Bigotry and Hatred
I tried to explain (I don’t think very successfully) to the moderator of the group, that “protecting children” from the word “queer” is just another way of saying there is something wrong with it, and that is hateful in a very insidious way.

Just like the Catholic church and the Boys Scouts of America excluding the GLBT community with subtle or not-so-subtle insults, it is a constant message to everyone that hears those messages, or realizes they’re being excluded from those messages, that being queer is very wrong.

In the case of this discriminatory action by the on-line community, can you imagine the 8 year old that’s never had exposure to any “queer” stuff, having feelings of same-sex attraction at the age of 13, and only knowing they should avoid, bury or lie about those feelings?

It’s hurtful and hateful in some of the most damaging ways.

I obviously opted not to remain a member of this group.

Current Knitting
There are now almost four squares completed on the Aunt Dorothy jacket (each square is approximately 8″ x 8″). It will take nine to complete the back.

What I Bought At Rhinebeck
For those of you who are interested (I know this is boring),here’s what my money went toward. Or in some cases, I was given as a gift.

First I arrived to greet the group of folks I posted pictures of yesterday. Lars, had bought me a gift at Schoolhouse Products, and schlepped it all over NYC and then to Rhinebeck. 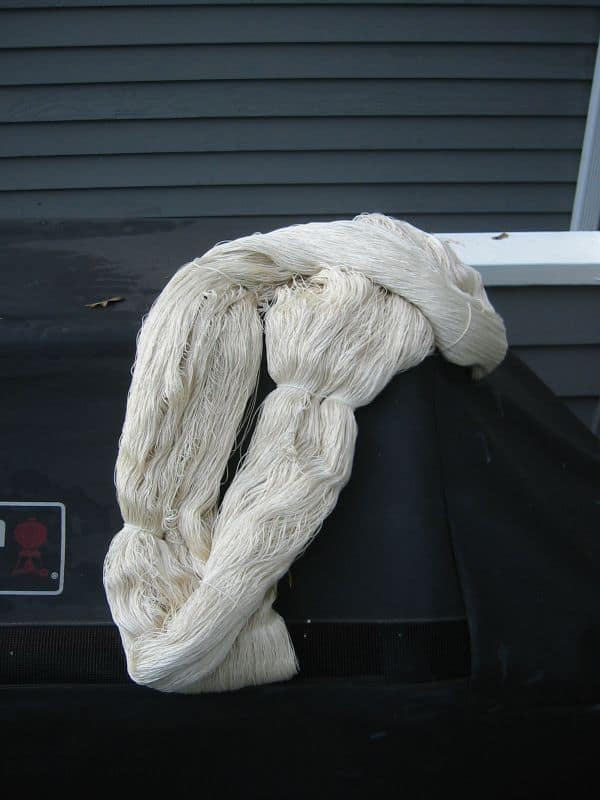 This is about two pounds of raw silk, and it’s quite cool. I’m not sure what I’ll do with it, but it was very much appreciated.

Then Selma gave me another gift of some roving she had that she had gotten in various ways. 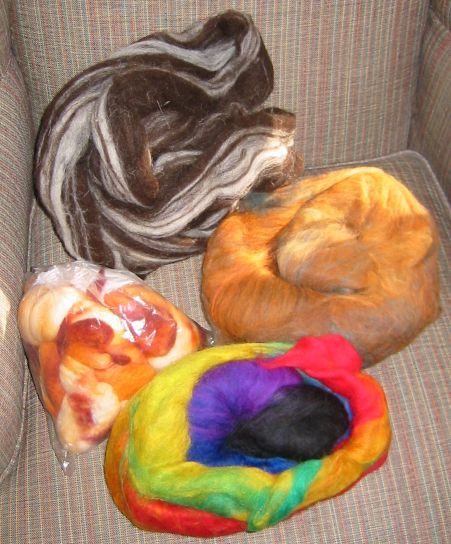 She has decided not to take up spinning, and she knew I could put this to good use. She is right, and I was very touched she thought of me.

My first destination after friends, was Brooks Farm. I love their yarn and their colors. I purchased the yarn for Aunt Dorothy’s sweater. 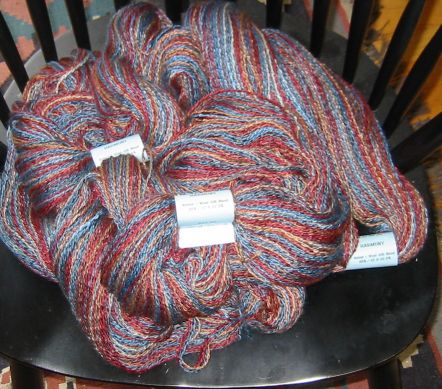 This is a yarn called Harmony with is Mohair, Wool and Silk blend. I bought it for the color and the luster of the yarn. I also picked up a yarn called Duet, which I have no idea what’s in it, because I loved the color. 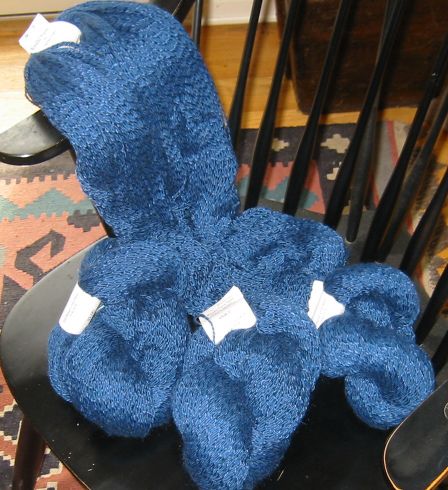 Then I headed directly over to Skaska, where Stephanie and Juno made me buy the white laceweight thread, because it was so soft (silk and cashmere???…I forget). I also picked up the taupe laceweight, and the Gossamer Webs book on my own. 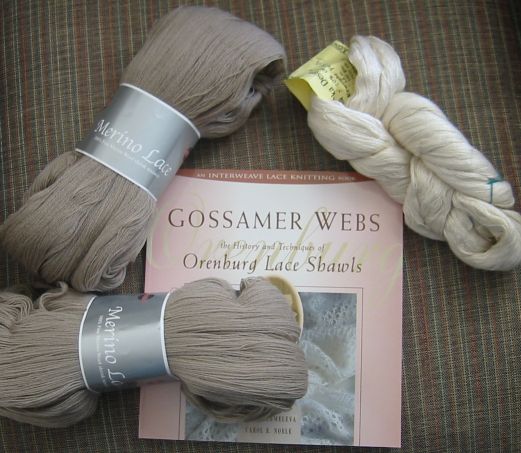 Directly across from Skaska there was a booth that had some raw Corriedale fleeces. 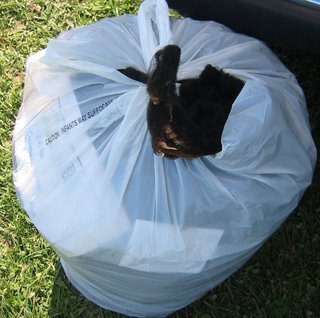 This is a hefty bag with six pounds of Corriedale fleece. It was dark brown with small gold highlights on the tips. I say “was” because I dropped this big bag off at Fingerlakes Woolen Mills’ booth, so they could take it back to their mill and make it into nice roving for me to spin. The thought of scouring this wool and carding all this by hand was way more than I was willing to do. I love the Fingerlakes offers this great no-shipping option for dropping off fleece for processing.

Finally, Thaddeus participated in the shopping frenzy by purchasing a wheel of this. 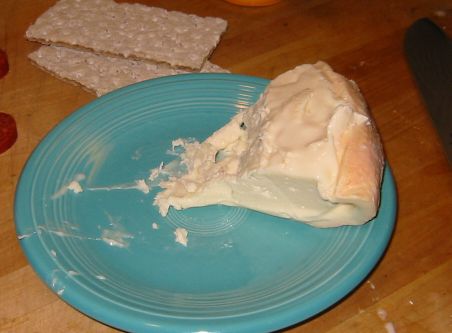 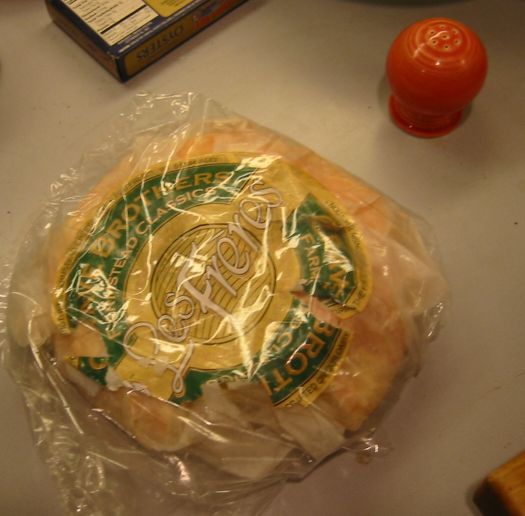 I will have one more Rhinebeck related post with a couple of pictures of colored leaves. Then you won’t have to read any more rants about it till next year (maybe).

Gay Marriage
Thanks to Lucia for late-breaking news on gay marriage ruling in New Jersey.

Finally some good news on this front.