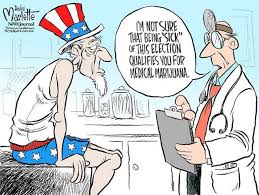 The Power of Friends and Family
In my early voting days, I used to be a naive, idealistic zealot, volunteering my time to causes such as political candidates who were anti-abortion (Chris Smith of New Jersey was a newcomer to politics back then), and other pro-Rebublican candidates.

One day, I went early to one of my regular a twelve-step meetings, and there was a young, vibrant lesbian there and we got to be discussing politics. She made a lot of sense in what she was saying, but one of the things that stuck with me, and changed my personal politics forever was her viewpoint on abortion and civil rights. She basically said that if I cared about civil rights, and the right to choose about one’s own body was taken away, it wouldn’t be long before other rights were taken away as well.

Mostly, it made me realize that I could be against abortion, but moreso against taking away a woman’s right to choose what happens to her body. And that’s the way I am today. I don’t like abortion. I think it’s an invasive, emotionally difficult intervention into the natural cycle of a woman’s body. However, taking away abortion as an option, is a much worse thing to do to women and our society.

The reason I talk about this, is, I also realized that day, that opinions could be swayed by talking one-on-one with someone who cares about public issues.

Last week, I took my mom out for her 75th birthday. I asked her if she was planning on voting…she was. I asked her if she was planning on voting for Santorum, and she said she was. I told her what that man thinks about the GLBT community. I told her what he’s done to our civil rights and what he would try to do if re-elected. I told her that she was voting for man who truly hated me and everything I stood for. She said she’d reconsider.

I then asked my sister to reinforce these things with my mom, and she did. Last I heard, she’s voting for Bob Casey.

Do your part to let friends and family understand the impact of who they vote for.

Current Knitting
The big mitered squares for the left-front of Aunt Dorothy’s sweater are finished, and I’ve started working on the smaller squares. 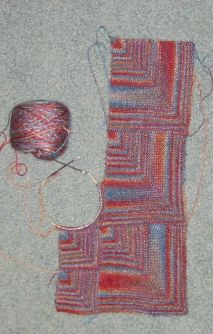 As Marilyn noted, some of the pooling in the colors have a nice effect on the sweater, however, my pictures of this garment are, by far, the most unflattering pictures of a garment I’ve done so far. Marilyn would like this garment much better in person than from what she’s seen in my poor pictures.

Current Reading
Being at the bottom of the barrel in my bookcases allowed me to read a very fun “gay Western” that I’ve owned for years, but thought I would hate.

, by Cap Iverson, is a well-written, enjoyable, light fiction. The story is appealing, and the characters are compelling. Do I think this book should be studied as great literature?…uh, no. Did I enjoy brainless reading?…yes. I’m putting together a book order, and I’m going to see if I can find the first two books in this series.

Readers’ Comments/Questions
Carol asks, “Hey Joe, did you ever hear that old rule of thumb for yarn estimation: 1/3 for the back, 1/3 for the front, 1/3 for the sleeves?”

Also, check out Carol’s guest-blogger entry, especially if you’re interested in knowing more about how to use Qiviut.