It Sucks To Be Hated

This is some asshole cheering the vote count to ban gay marriage in Oregon.

What I Will Never Understand
Why do they care?

Is it because they fear we will take over the country with our bohemian, wanton ways?

I don’t want that much responsibility, thank you very much.

Is it because it threatens heterosexual marriage?

I promise I won’t marry any straight men. And besides, Britney and K-Fed are a much bigger threat to marriage than Thaddeus and I will ever be.

Is it because they fear for our immortal souls and don’t want us going down the path to eternal damnation?

I think it’s crazy for people to ride motorcycles without a helmet, but I think it’s even crazier that you have to legislate mandatory helmet wearing. In the same way, why would folks want laws that legislate the prevention of self-damnation?

Is it because they hate us, and don’t want us to succeed in any way?

Based on the look on that guys face above, I’d have to think it’s mostly that.

Current Knitting
I finished the left-front of Aunt Dorothy’s mitered square jacket, and just started the right-front. I’m very pleased with the pattern. It’s well written and easy to follow. Nadine created a nice design and wrote an impeccable pattern.

A progress picture will be in the next blog entry.

Current Spinning
I often think when I post progress pictures of my spinning, it doesn’t look like a lot of progress has been made. 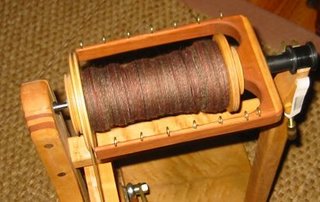 But whether this picture shows any progress or not, I did spend a lot of time spinning this week. I want to try and finish this bobbin in the upcoming week and start on the third and final bobbin of this spinning project.

Readers’ Comments/Questions
Karla asks, “Are gays looking to have Christian marriages? I can understand how they (Christians) would be upset about that, because it’s stated quite clearly in the bible that a man and a woman are the ones who marry and procreate. Right?”

Actually, there are a number of Christian sects in this country that don’t interpret the bible as you do. Some Christian churches here would be glad to marry same-sex couples if they were legally allowed to do so. Except in some of the more archane sections of the Old Testament, I also don’t know that the bible says that only men and women should marry, but I’m not a big bible person.