Contentious Debate For My Blogiversary

I’m glad that after four years of publishing this blog, the readers still open my eyes to new ideas and better ways of stating long-held beliefs.

I still believe this blog has one of the most interesting, intelligent and creative readership of the knitting blogs. Thank you for participating as much as you do.

Usually, when controversy occurs in the knitting world, I just shake my head and think, “How ridiculous…it’s knitting for godsakes.”

Political/Religious Debate
I wish I could feel the same when it comes to how this country is run, but I just can’t.

Evidently, neither can some other readers…I’ve never seen such verbose comments, but I enjoyed the interaction. It gave me a much clearer sense about why I feel as I do about the bible, religion, queer rights and politics. I also feel as though I understand more where folks like Susan are coming from.

I disagree with much of what Susan believes, and most specifically, her comment that if folks don’t believe the bible was written through divine inspiration, then we were talking past each other. If what she means by “talking past each other,” is that we wouldn’t be able win the debate, then I do agree with her. However, hearing the rationale for her conviction was very eye-opening for me, and while I still hold true to my beliefs and ideas, I was glad to finally have a somewhat better understanding of hers.

I was also grateful to have my ideas and beliefs so eloquently described by folks who think more like I do.

Current Knitting
I’m happy to say, I finished the front of Aunt Dorothy’s sweater, and it looks quite fine if I do say so myself. 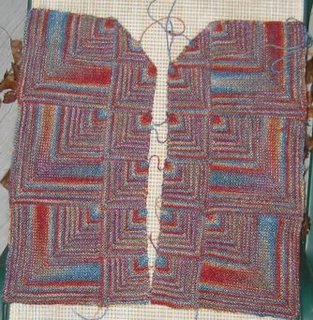 I have also started on the first sleeve, and I’m hopeful to finish the sweater/jacket by next weekend.

Weavette On Steroids
I got a newsletter from Hill Creek Fiber Studios, and saw a picture that looked like an overgrown Weavette tool. 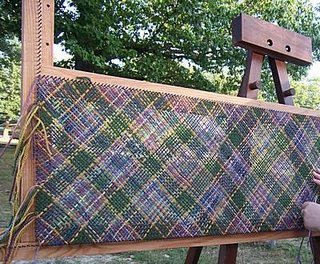 For those Weavette lovers, like me (he writes with pride), check out their site.

Readers’ Comments/Questions
Liz asks, “Do you think that by not allowing gay marriage in this country, that it is a violation of civil rights?”

I do. I am denied many significant legal and financial rights that are given to all legally married citizens of this country. It would be nice to have the community blessing for my 23 year relationship as well.