When folks tell me that the news media is left-leaning, I have to honestly say I don’t see it.

Possible Reasons
It could be that I’m so far left-leaning myself, that a left-biased media is still to my right.

It could be that I only look for instances of conservative news reporting, and don’t notice the liberal reporting.

It could be that I stall too often on Fox News, which nobody could ever convince me is liberal or moderate.

Or it could be that the media is as rightwing as I suspect it is.

The latest example would be the main story of leadership changes in the House and Senate. The Republicans opted to vote in Trent Lott as the Minority Whip of the Senate, despite the fact that he was dumped as the Senate Republican Leader for making “racially insensitive” remarks.

“I want to say this about my state: When Strom Thurmond ran for president, we voted for him. We’re proud of it. And if the rest of the country had followed our lead, we wouldn’t have had all these problems over all these years, either,”

At the time Thurmond ran for president, he ran as a segregationist, and Lott never clarified publicly what he meant by “all these problems.”

Despite this seemingly interesting controversy, I saw no mention of this in any television news broadcast. Instead, it appears they opted to discuss how powerless Nancy Pelosi was because she couldn’t get John Murtha voted into the House Majority Leader position over Steny Hoyer.

I guess I don’t know what sells advertising on news broadcasts.

Current Knitting
I did end up having to rip out the sleeve. The cuff was too wide, and I was fearing that I was going to run out of yarn unless I started it out a little narrower.

I’ve made a lot of progress on the first sleeve, and still hope to finish knitting this garment sometime this weekend.

Knitting Workshop – Barbara Kerr
For the folks that live near me, Barbara Kerr will be doing a knitting workshop on “Knitting Mistakes And How To Fix Them” at Twist, in New Hope, PA. The workshop is on Sunday, November 26th (the Sunday after Thanksgiving), from 11:00 am to 5:00 pm.

This has been a public service announcement to support my local yarn store. 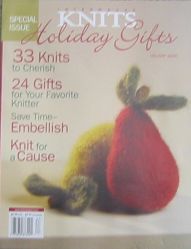 For US$7.99, there are a total of about 23 patterns, but most of the designs are for small, not overly complex things:

Definitely not worth the price in my opinion. I like the cover design of felted fruit by Nicky Epstein, and I thought the Ribbed Cardigan by Kate Kuckro
was very nicely done. Some might like a couple of the holiday stockings as well, but other than that, nothing worth even looking at.

Readers’ Comments/Questions
Both Thaddeus and I were grateful for all the nice wishes for our anniversary. Kathy was quite right, that our faces look very shiny in the picture, but I will have to blame that on the flash of our friend’s camera. Neither of us has an oil slick on our faces.