The sewing and knitting worlds include some of the cattiest, bitchiest people on the planet.

Button Search
I had to go into a neighboring town (Doylestown, PA) on Friday of last week. They have a large fabric/sewing store there, so I brought the completed Dorothy jacket, to try and find two large, interesting buttons.

I was met at the door by one of the rude ladies I’ve seen there before, who told me the store was closed (yes, closed on Black Friday), and she closed the door without further comment. I noticed signs that said the store was moving on December 4th, which I think is why they were closed.

Fortunately, I had a backup plan. I was going to stop at Twist, to see if Deb carried buttons. She does, so I pulled out my sweater, and got a few very nice “oohs and ahhs”, and then started trying different buttons on to see how they looked. I mentioned to Deb that the sweater was easy because I had based it on Nadine Shapiro’s design, at which point a customer in the store, who I’ve never seen or met before, claimed loudly that Nadine had stolen her design, and that she was shocked to see her sweater design show up in a Jamieson book.

Knowing Nadine, I’d have to say she’s the last person who would steal a design, so I told the woman that Nadine and I had been to a Barbara Kerr seminar on mitered squares, and Barbara was probably what inspired Nadine to come up with her design. The customer claimed that she had worn her sweater to Simply Knit and Nadine had examined it closely, and then came out with her design. She did also admit that there are limited things that can be done with mitered squares, but her accusations of a friend still annoyed the hell out of me.

Fortunately, it didn’t sour my feelings about Twist, because, as usual, I found exactly what I wanted there.

Aunt Dorothy’s Sweater – Complete
I washed and blocked the sweater jacket, and then put on the buttons I found at Twist. 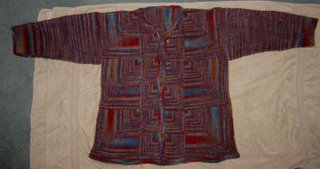 The buttons are done by a local woman who using felting techniques. I think the buttons add the exact amount of flair and contrast that I was looking for. 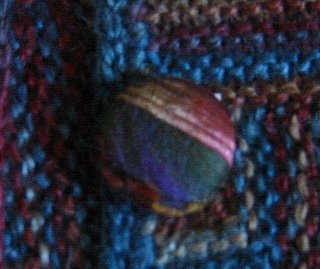 These last two pictures are the most accurate representation of the color of the Brooks Farm yarn that I’ve been able to capture on my digital camera. Pictures of this sweater often come out much more crayon-bright, when in fact, it’s more muted and smokey in its colorway.

Current Knitting
I didn’t feel like starting a new project over the holiday long weekend, so I worked on test-knitting my the pattern for the Celestine Shawl.

This was my second time through test-knitting, since I find it extremely difficult to proofread my own knitting patterns. I was very satisfied with the result, so I’ve posted the pattern design on The Knitting Vault, and Fredda has already gotten it put up on her site (if you ever considered getting the pattern for the Koigu Cross Stitch scarf, or any of my other designs, you can search by Designer Name = “DoublePointed”). I have a feeling that this pattern is going to be a big seller, largely because of the color of Carol’s laceweight yarn.