If you think the blog title for today is just to get more hits, you are wrong (although, not an unfair assumption).

Girls Gone Wild
I heard a promo on NPR yesterday, for today’s Fresh Air show. It was going to be a show about the “age of raunch” for women, and why women today would want to expose themselves in videos, such as “Girls Gone Wild.”

I’m not a woman, and I don’t presume to speak for them, but the topic of the radio show did pique my curiosity.

Most of the women I’ve seen in the advertisements for this silly video are attractive enough to entice sexual partners without publicly baring their breasts. I don’t think these women get any money for flashing the camera. Other than perhaps shame and infamy, there is little fame or recognition for showing their tatas.

So why would they do it? Are they just drunk and easily convinced? Are they trying to show that they are unfettered by self-conciousness? Are they making a statement, such as my blog name, that tries to reclaim their body with an in-your-face display of their bust? Or perhaps, it’s low self-esteem that makes them feel more accepted for doing it?

I didn’t get to listen to Fresh Air, so I don’t know what their hypothesis is, but I’d be interested to hear what others think.

Current Knitting
I finally decided to start work on a Carol Lapin design that I’ve had the pattern and yarn to make, for a few years now. 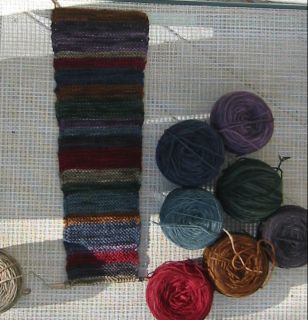 This is the beginning of one of 10 multi-color panels that will be put together as a coat when it’s all done. I think this design was published in one of the “Simply Knit” book series, but I don’t remember the name, and I don’t have my books with me at the moment. The pattern was originally designed using Araucania yarn, and then adapted to Jamieson Shetland, so it could be published by Unicorn.

I’m doing it in the much more interesting and rich colors of Araucania.

Readers’ Comments/Questions
Regarding the just-finished Aunt Dorothy jacket, Tricky Tricot asks, “What did you do with the collar?”

The neck shaping is done by adding two triangles at the top of the small squares. A simple crochet edging was done around all the outer edges as well, including the collar.

And to answer Ted’s question, “You did a row of slip stitch crochet around the edge?”

It was actually two rows of single crochet around the front opening and neck and a few more at the bottom to get as much lenght from the yarn as I could.

Ronni writes, “I have a question. I used to go to Simply Knit in Lambertville and also used to buy fabulous sweater kits at stitches east.
Do you know what happened that they are no longer in business?”

I don’t know for sure, and I don’t have any juicy gossip about them. I too loved Simply Knit and their predecessor in Lambertville, The Tomato Factory. Carol and CeeCee were the owners of the store, and I think they decided it was time to call it quits, and retire. Nothing more interesting than that.