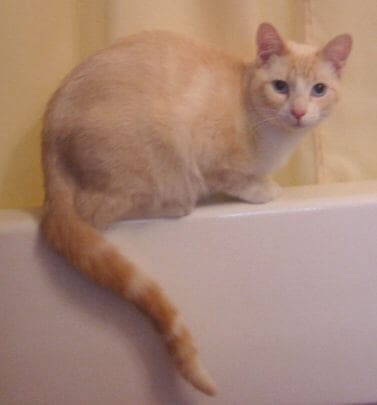 A new member of our family was added yesterday, and his name is Nico (we think).

New Kitty
Yes, after researching it all carefully, we decided to get a new cat.

Nico is a rescue cat that we found through PetFinder.com, specifically through an organization called Adopt-A-Friend, Inc. He was born on March 31st of last year, so he’s still a pretty active kitty, and he’s had all his shots, and has been neutered. His foster mother called him “Mostly White”, but when her son added him to PetFinder for her, he thought it was a racist name, so he changed it to simply “NoName.” Thaddeus had already picked out a name for the new guy, but it didn’t seem as fitting when we met him. Nico seemed more appropriate.

Thaddeus and I knew we wanted to stick with a Siamese breed mix, since we’ve been told that Gage was very typical in terms of his personality (or would that be “felinality”?), and we wanted a cat as sociable as he was. While we considered other possible breeds, we knew we wanted Nico as soon as we saw his picture on PetFinder.

Nico is still getting acclimated (we’ve decided to expose him to only one room for the first day and expand it to two today), but the first impression he’s left so far is of a very sweet boy.

Current Knitting
Since we picked the cat up yesterday, there was a lot of preparations that needed to be done to the house to make it kitty-safe again.

That’s my excuse for the minimal amount of knitting I got done on the dark tweed pullover. 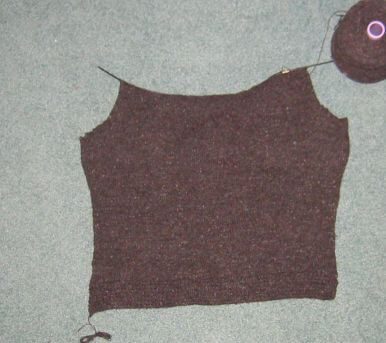 I’m hoping to finish the back this week, but we’ll see how it goes.

Readers’ Comments/Questions
Kathy wrote, “Some of the information and conclusions passed along by Mr. Gore in his documentary were more than a little sketchy.”

I’d be curious to know which parts of his movie were manipulative or not entirely accurate. I was honestly shocked by the information I heard/saw in “An Inconvenient Truth”

. If there were untruths or misrepresentations, I was completely fooled by them myself.