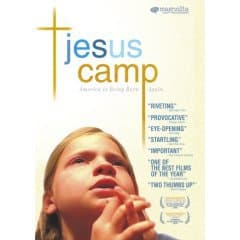 I Finally Understand The Michigan Militia

I just saw Jesus Camp last night, and I want to start my own version of the Michigan Militia to defend against the crazy people that are trying to take over this country.

Jeezus
I reacted to the movie, Jesus Camp

on many levels. Like most rational people, I was frightened by the potential of the fanatical so-called Evangelicals. But mostly, I’d like to respond from a spiritual perspective.

This movie was very spiritually disturbing to me.

I would go so far as to say that what the parents and ministers, portrayed in this movie, were carrying out Satan’s very own work. Using children, to forward their unholy agenda was the worst part of what they do. Denying children the right to think for themselves, by indoctrinating them with all their brainwashing, should be an activity worthy of having them lose the right to parent their own children.

I was grateful in at least one way, that I got to see this documentary. It allowed me to come up with a response to religious proselytizing. If asked to “accept Jesus as my personal savior,” I would simply reply that I completely reject everything the requestor stands for. I reject their fanatical ideas about Jesus and Christianity. I reject their unthinking allegiance to an idea that is repeated by rote, as opposed to experienced. I reject their interpretation of the Bible. I reject them as humans…they have accepted the role of automaton.

Current Knitting
I finished the first sleeve of the dark tweed pullover, and started on the second sleeve.

I couldn’t get a decent picture, so I’ll have to post one with the next blog entry.

Local Knitting Classes
Did anyone get a chance to go to the Nelda Davis workshop this past weekend?

“Twist” is having a number of upcoming workshops that I thought some of the locals might be interested in:

BEGINNING KNITTING
Learn some fun techniques while you get started on a great scarf that knits up quickly with bulky yarn and big needles.
Sat. March 3, 10:30 until noon – FEE $25

LEARN ENTRELAC WITH OUR FABULOUS NEW WORKSHOP TEACHER
Lisa Fuellemann will teach her first class at Twist. You will first learn the technique of this fun knit and then get started on a project of your choice with Lisa. Suggested projects include a beautiful wrap in ‘Scarf Style’ and a smaller pillow to finish more quickly.
Sat. March 10, 10 until 1 – FEE $50

TIPS AND TECHNIQUES A to Z WITH BARBARA KERR
Barbara Kerr returns for an all day workshop this month where she will teach us so many of the great tips and secrets she has collected over the years. Something for everyone.
Sat. March 24, 10 to 4 – FEE $70

MITTENS WITH STEVE
This month, Steve tackles socks with 2 size 8 circular needles. What fun to knit up a pair of warm bulky socks in a short time!
Sun. March 25, noon until 2 – FEE $25

I think I’m going to try Steve’s class. I have no idea how well he teaches, or how useful his technique will be. I just think he’s fun and would give an enjoyable workshop.

0 comments on “I Finally Understand The Michigan Militia”