Have you noticed how insulted people are when you ask them to look at any aspect of their behavior?

God Forbid…
…you should mention that someone just dropped litter on the street.
…you should ask someone to be quiet in a movie theater.
…you should point out a possibly inadvertent inference someone makes in a blog comment.

“…if you’re going to say that ‘deciding what is moral or immoral is a very personal thing,’ do you not then have to grant General Pace the right to decide what he personally finds to be moral or immoral, on the basis of whatever code of morality he follows? And if he considers homosexuality to be immoral, wrong, a crime, whatever–doesn’t he have the obligation to try do something about it? I assume you believe that, for example, murder, molesting children, and stealing cars are immoral acts. If you knew that someone was committing murder, molesting children, or stealing cars, wouldn’t you feel compelled to voice your objections to it or do something to prevent it?”

As Cortster pointed out, anonymous did compare homosexuality to “murder, molesting children, and stealing cars.” Even if unwittingly.

I actually believe that anonymous is everything s/he says s/he is (in terms of liberal leanings), and I appreciate the point trying to be made. However, I don’t agree with the point at all. Yes, I do agree that General Pace has the right to determine for himself what is immoral. But the comparisons you make, in addition to being illegal, all of the activities mentioned are socially agreed upon as immoral, and therefore I would speak out against them. There is no such socially agreed upon morality about homosexual acts, and for those areas, no, I wouldn’t feel compelled to speak out, or try to prevent them…especially in a legal sense. For example, even though I truly believe that bearing more than two children is immoral, I also realize this is a personal view, and not one I would ever attempt to point out to people that exceed my limit.

My real point of General Pace’s comments, was that I believe many folks confuse the term “moral” with “distasteful,” and just because Pace (or his pastor) find homosexual acts distasteful, there is no generally agreed upon immorality about them at all.

In summary, I appreciate you giving me the opportunity to clarify my original point, but I would also suggest maybe taking a look at what you compare homosexuality to.

Current Knitting
The third slipper is finished except for the outer sole and bumper (and no, Kathy, I don’t have three feet…I will be making multiple pairs of these slippers for family members). 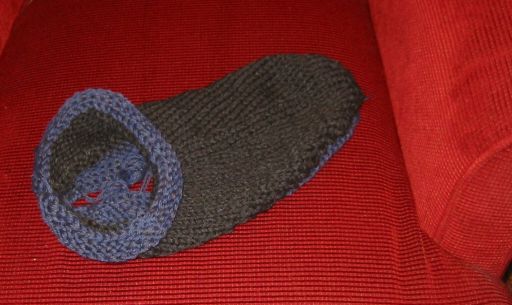 Like someone mentioned a while ago, I like this pattern. It knits up quickly, it requires some level of attention, and it makes a great slipper. 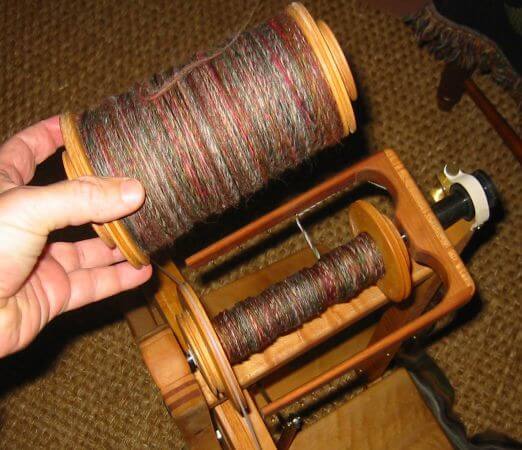 Readers’ Comments/Questions
Mel writes, “And if you don’t already have someone in particular in mind for ‘In Sheep’s Clothing’, I’ve been eyeing it for a while. I’d even pay for it.”

I don’t, and I couldn’t think of a better recipient than a veterinarian. The book is all about different breeds of sheep and the wool they produce. Send an e-mail to queerjoe@comcast.net and let me know where to send it, and I’ll put it in the mail this weekend.

Cortster also wrote, “I’m not sure I understand (or, perhaps, I’m being deliberately obtuse) but I don’t understand how “receiving” is any more emasculating than “taking” considering it would seem one would have to possess more trust, will power, strength, etc. to receive than take.”

Technically, in a physical way, you may be correct…but emotionally, being penetrated, such as in prison, is clearly seen by most men as “being the woman,” and extremely emasculating.