Thank you all for your comments on Mormonism. I had forgotten the impact of loneliness and the searching, empty feeling some folks have. I had also forgotten how the decision to have faith isn’t a pragmatic decision.

Now it all seems clear how someone might make a decision, that to me, would seem to be irrational.

I know what the definitions of atheists and agnostic are, but what do they call someone who has an unclear idea of some higher force that could be considered god?

Book Recommendations
I also appreciated the perspective that some of the Mormons or ex-Mormons provided by reminding me that taking something mystical out of context could make most religions looks silly.

Under the Banner of Heaven

The Poet and The Murderer

Shot in the Heart

I’ll have to check them out and see if I can add them to my pile of books to read.

Current Knitting
I finished another couple of rows of blocks on the front/right of the Colorblock Cardigan. 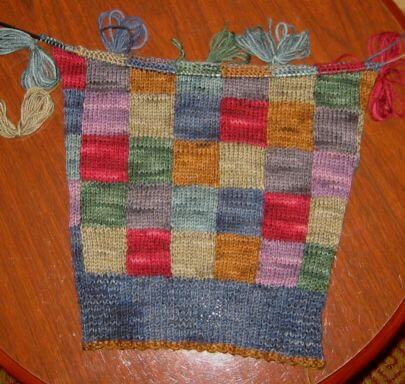 I’m hopeful to finish this part and move on to the sleeves this coming weekend.

Current Spinning
I opted to go with the deep plum colored merino. The two singles alone had very little differentiation, and looked rather brown when swatched. The bright red completely changed the color of the yarn, and I didn’t like it. The pine green seemed to have very little effect

The plum seemed to blend the colors more, but at least it gave the yarn, and test swatch a more plum color, which I prefer over muddy brown. Thanks for all the advice, especially about swatching the resulting yarn.

Here’s the result of my efforts. 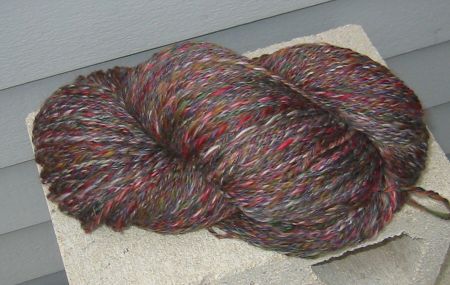 I’ll try to get a decent picture of what it looks like swatched up in a knitted fabric.

Readers’ Comments/Questions
First of all, thanks everyone for your birthday wishes. I had a very nice birthday, with an unexpected cake from client project team members. I also got to have lunch with my sister-out-of-law at one of my favorite restaurants in Springfield, MA (Big Mamou’s). Thaddeus and I will celebrate this weekend.

Mel asks, “Is it true what they say about you being a hits whore?”

Could you have any doubt? I’m almost up to one million hits since I first started this blog, and I was considering having a contest where the winner would have to send me a screen print of the hits counter on my blog at 1,000,000 or whoever came closest if the millionth hit wasn’t recorded for posterity. I’ll never be a Franklin or a Stephanie, but I like that folks read my blog.

0 comments on “Revelations From Comments”