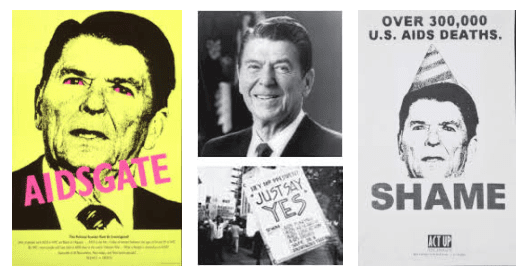 All during the eighties in this country, HIV/AIDS wasn’t even mentioned by the heartless bastard in the White House at the time (Reagan). Now they’re putting someone to death for possibly infecting people with it.

Death Penalty For Soliciting A Minor
I know some of you (especially the folks that have children) might think that soliciting a fifteen year old for sex is worthy of the death penalty.

A man in Texas, who is infected with HIV, was brought to trial for soliciting sex with a 15 year old boy. As part of the case, the prosecution showed hours of videotape, that the accused had filmed, of unprotected sex with other guys. He had also been previously convicted of two other felonies, and the jury used the three-strikes rule to give him the death penalty.

Don’t get me wrong, I think having unprotected sex when you’re HIV positive is awful. I think soliciting a fifteen year old for sex is awful. And both of them are worthy of legal punishments.

But it seems the penalty imposed is clearly one of discrimination because the man was gay.

If the man had been convicted of attempted murder for knowingly exposing others to HIV, I might have understood the penalty. I honestly can’t understand how the videotapes were relevant to the case of soliciting a minor for sex. If he had actually had sex with the minor, it would have been worse, but not necessarily worth the death penalty. If it had been a woman who had solicited the boy, she might have been given the “Mrs. Robinson Award” for her efforts, instead of jail or the death penalty.

I can only think the jury and the court where the man was tried, had a visceral reaction to the man for being gay, being a “predator” and having HIV. I’m sure they were also quite pissed that he was potentially infecting sex partners without revealing his HIV status.

I know all these issues are distasteful, but I want to be clear that I’m not defending what the man did. I do think he should be punished. But I also think he should have a trial that tries him for his crimes, as opposed to his morals.

If we put people to death for their morals, the pharmaceutical firms would have a lot of employees and CEO’s on death row for much of the same things this man was sentenced for.

Current Knitting
I was able to get some more work done on the colorblock cardigan sleeve. 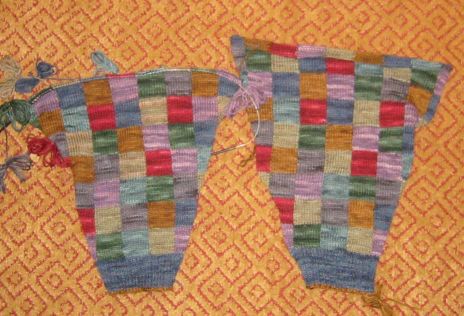 You can see I have less than two rows of blocks left, and the knitting part of this sweater will be complete (except for the button band and collar).

I’m assuming this is their regular reminder issue to have women do breast cance self examinations. I’m surprised it didn’t have a pink colored theme.

Well, even if inadvertent, please take this as your reminder to do a breast-cancer self-examination. You know it’s important.

Overall, this issue is not too bad. It seems that this is a continuation of the VK trend of getting back to a fashion knitting magazine, and trying things that may not be trendy or liked by all, but have a certain fashion flair.

I loved the section on lace (“Eyelet Candy”), and many of the garments in that section.

There is an absolutely garish design for a baby/child by Annie Modesitt. It’s an Elvis-like pantsuit in off-white, with so much embroidered “embellishment”, that a matador would feel silly wearing it. Overall, however, I’d consider it one of the only Spring/Summer issues that I’ve purchased in a while that I’m glad to have bought.

Readers’ Comments/Questions
Regarding morels (not morals), Angie asks, “I am wondering if you dry these and if so it increases the flovour?”

Many experts will tell you that a dried morel is more flavorful (flavourful?) than a fresh one. I don’t agree. I think they both have about the same density of taste. Typically, Thaddeus will dry morels if he has enough to store, otherwise, we’ll just eat them fresh.

Marilyn writes, “If you guys were up in Andover, I’ll bitch-slap ya for not stopping by to say hello. I’m not all that far from your morel-hunting fields, ya know. Sure, morel hunting was just an excuse to go to Hotdog Johnny’s, wasn’t it?”

Actually, we were up in your neck of the woods, but I wouldn’t be caught dead dropping in on someone in our mushroom-foraging clothes. As for Hot Dog Johnny’s, we stopped there both last weekend and this weekend. Given the number of mushrooms we found, it was, in fact, just an excuse.