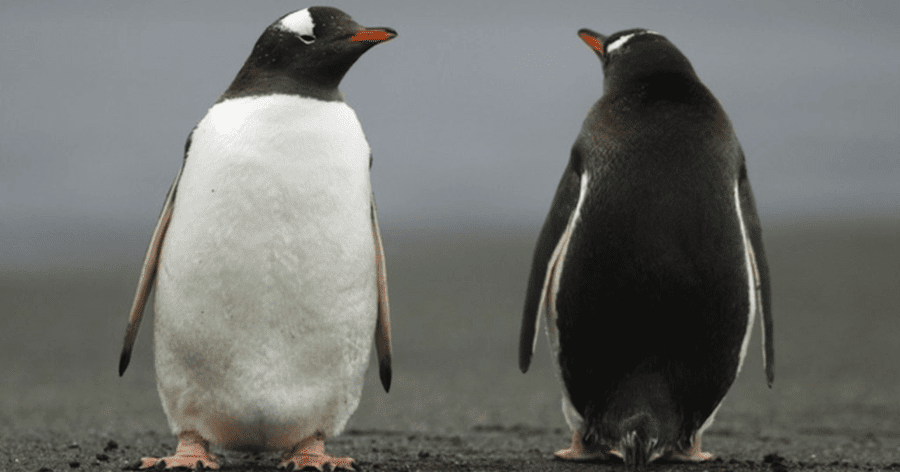 I am one of those folks that always seems to be attracted to people and things that are very different than myself.

My Opposites
Thaddeus, for example, is very laid back, and stable and thinks things through completely before acting. I am energetic, frenetic and make quick, emotional decisions.

Usually, when I see someone that I find attractive, they are able to wear greens, yellows and oranges. I look sickly if I wear any of those colors.

I have an enormous amount of respect for those folks that can think musically, since I have virtually no aptitude for music whatsoever.

There are also some similarities in others that I find attractive. I prefer folks that are quick-witted and have a similar sense of humor as mine. I like folks that can express themselves well, both verbally and in writing. I am attracted to folks that have similar values as I do.

I’ve also seen long-term, successful relationships where two folks are very similar. So, who knows whether opposites really attract, or whether we just tend to notice the differences more than the similarities?

Current Listening
I have recently met a woman who does music professionally (teaches, plays sings…has a total music head), who fascinates me. She sings professionally, and has the required MySpace page that lets you hear her music, so I’ve been listening for the last week, and thought you might like to hear her as well. I enjoyed Another Day, but you can’t rely on my unsophisticated palate in music.

Check her out, and drop her a note if you like what you hear. The one thing I do know about music, is that I love a deep-timbred woman’s voice…like Val’s.

Current Knitting
Believe it or not, I tried starting a different project than scarves this past weekend, but nothing I started working with seemed to be working out.

I ended up doing three scarves instead…all of which I’m very happy with. 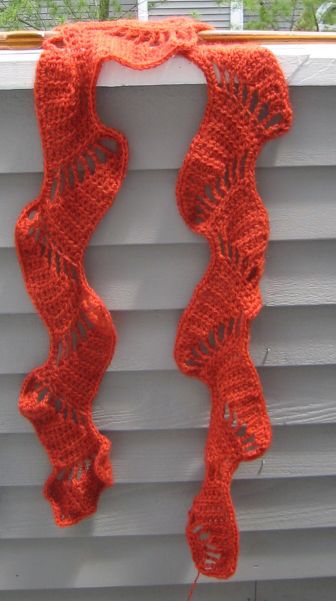 This first one is another “rendition” of Kathy’s Boteh scarf. I did it in Rowan’s Kid Classic yarn, in a color that Fiestaware calls atomic red or some such shit. I’d call it blood orange.

The last two scarves, I just decided to use up leftovers from all my other scarves, and came up with these bohemian delights. 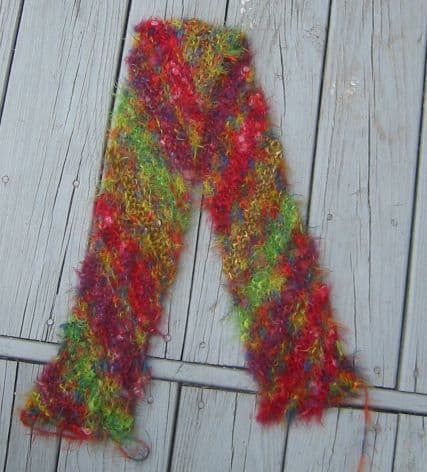 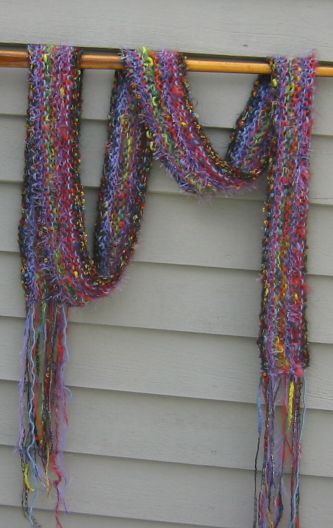 The first one, is just different colors of the same kind of furry yarn, done diagonally. The second one is everything and the kitchen sink, all knitted up lengthwise, leaving each end as its own fringe.

Readers’ Comments/Questions
Thanks to everyone for their comments on the contest and contributing to Year Up. I’m glad folks are interested in the idea of it, even if they’re supporting more local organizations.

Also, if you didn’t check out the Belief-O-Matic that Cara mentioned in her post, you might be interested. I turned out to be a Neo-Pagan, or a Liberal Quaker.

0 comments on “Opposites Attract…Or Not”