Even though I’m a relatively low-readership exclusive-readership blog, I am sometimes asked to take free stuff to promote it on my blog.

Completely Honest Book Review
Despite getting this book for free from the publisher, I have to say The Knitting Man(ual)

is the best knitting book I’ve ever read. 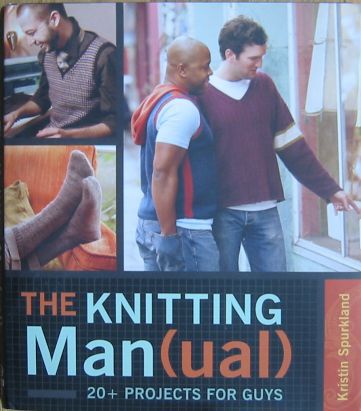 Okay, so that’s not exactly true, but I actually did like much of this book, but first I’ll give a couple of complaints. The least likable thing about the book, I thought was the lack of discussion on color for men. Men can be the most picky bastards when it comes to the color of their clothes, such as only finding blue, black and gray acceptable for a sweater. There are many ways to get around this, and none were discussed, and some of the patterns would never pass muster in that area.

Also, I thought a couple of the patterns were way too homemade looking for a man to wear. The colorblock scarf was one item that comes to mind.

Finally, a minor complaint about the book is a completely personal one (as if the first two weren’t). Designs that use complex pattern stitches only use charts to describe how to do them. Marilyn and I had this discussion this past weekend, and I am not a big fan of charts, and would much prefer text.

On the good side, I have some big positives about the book as well. First, I thought the patterns were an excellent mix of classic designs (which men adore), funky/interesting patterns (which some men adore) and vintage-like designs that men would actually wear.

Second, I thought the publishing quality was quite high. Even though the models were knitter-friends or family of the author, the photos and the layout were quite appealing. I actually read most of the text part of the book, which is very rare for me, and found it concise and interesting enough to be worth reading.

Finally, I think the book will be very useful in two ways. One, I will actually be making at least one or two of the designs in the book. Second, this would be an excellent book to give to a budding male knitter in your life. It has all the beginner’s information on how to knit at the beginning, and it is extremely well-written and documented with clear pictures.

Overall, if I had never received this book as a gift, and I had taken some time to review it in bookstore or yarn store, I would definitely have bought it. In fact, I will probably be buying at least one or two copies whenever I meet a new male knitter or a female knitter who complains about patterns for men. 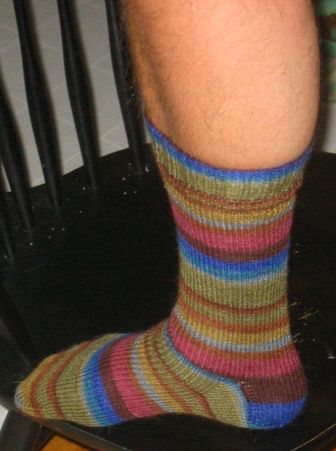 I used a modified version of Judy Gibson’s “You’re Putting Me On Socks” pattern. I love the way it came out, and can’t wait to get the other three socks finished so I can wear them all the time.

I also got some additional work done on the crochet tablecloth.

In comments, Evelyn asks, “Can you give us an idea of the scale of the doily thingy?”

Yes, here it is in relation to the chair on which I photographed it. 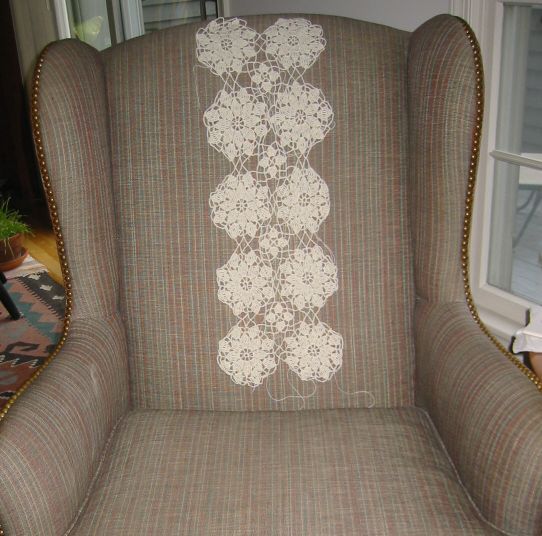 Actually, this is quite a lot of progress for me. I’m enjoying the pattern so far, and I have high hopes (at the current moment) of actually getting a tablecloth completed.

Readers’ Comments/Questions
mimi (who doesn’t even use capital letters in her name in comments) asks, “Might there be an extraneous comma in your sentence below? The sentence would mean something different without the comma.

(I have never entered Deb’s store, and left empty-handed).”

Yes, that is a stellar example of how not to use a comma. How possibly could I have never entered Deb’s store, and also left the store empty-handed? That doesn’t even make sense from a boolean logic perspective. Thanks for pointing it out.

Glen writes, “I know you’ve mentioned knitting and crocheting for the Rhinebeck Festival in October, but are you attending the Dutchess County Fair this month?”

No, I won’t be going to the fair. I usually only go to two fiber-related fairs a year. The Garden State Sheep Breeders’ festival, which is next month, and the NYS Sheep & Wool festival at Rhinebeck.

Barbara writes, “That must have been a popular crochet pattern. My grandmother used it to make 4 full-sized table cloths. I remember her sitting by the window always working on one of those stars. Where did you find the pattern – and what’s it called?”

I got the pattern from an old crochet book, called “The Complete Book of Crochet,” and they list the pattern as #7405 or some such thing. 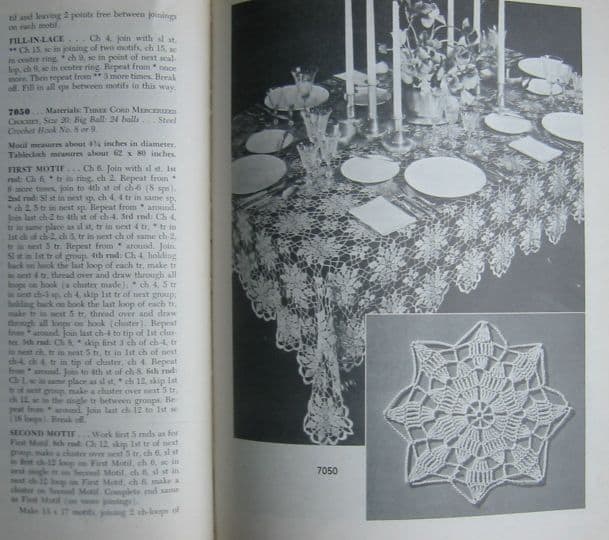