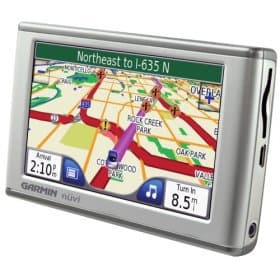 I was glad to read such thoughtful comments about folks who take great care to navigate past the easy ways of determining which candidate they want to vote for, and make careful choices…even if they don’t agree with my choice.

Even Better
It’s even better for me that many of the folks that commented seemed to at least have tried to see how much of their opinions were swayed by the incessant media commentary. I do believe that the media has favored Barack much more than Hillary, and that they have perpetuated the often unquestioned dislike of Hillary and the favored underdog status of Barack.

All that being said, I hope one of them will show the American people what a president should be.

I put the picture of the Garmin Nüvi on my site for two reasons. One, because it was a picture of my awful imagery of “navigating” but also because the prices for this thing has gone down even further than they used to be. This thing is under $370…they clearly must not have sold enough of them at Christmas.

Current Knitting
I started the Ichida lace cloth and I’ve made quite a bit of progress on my first chart-only lace project.

I ended up going with a mercerized cotton for this project, and I’m not sure I like it. Now that I’m up to round 34, I think I may rip it out and try again with some other yarn. It’s not showing the definition as much as I had hoped.

Vacation
Next week the blog and I will be on vacation.

Look for the return of a tanned and relaxed blog when I get back on March 9th.

0 comments on “Finding My Way”