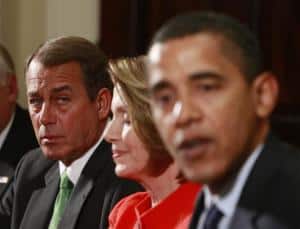 A Big Thank You

I have to admit, I would have been really pissed if all the Obama fanatics that helped him win against Hillary hadn’t come out to vote for him in the general election.

It’s Only Fair
While it scares me a bit that the youth vote was still somewhat sparse, I want to thank all of the young’uns who did in fact vote. I also want to thank all of the true conservatives that rejected the neo-con platform of the Republicans and voted for Obama (or minimally, didn’t vote for McCain). My thanks also go out to all the big Hillary supporters and the devout feminists, who despite their annoyance at missing out on having a woman for president, still voted for the best choice available. Finally, a huge thanks to the Obama fanatics that kept the energy alive from very early on in the campaign. You were the ones that actually made Obama a viable candidate even when folks like me didn’t think it was possible.

For the first time in a long time I feel as though we truly have a “big-tent” mentality in leadership.

Current Knitting
Kept my nose to the grindstone (does anyone else flinch a little when they think about their nose pressed to an actual grindstone?) and got quite a bit done on the stranded knitting pullover.

In addition to finishing about 10 inches of sweater so far, I also finally graphed out the whole sweater so that I know when to start the arm holes and the collar.

Blogiversary
Wish me a happy blogiversary tomorrow. Hard to believe I will have been blogging about knitting and queer politics for six years now.

0 comments on “A Big Thank You”