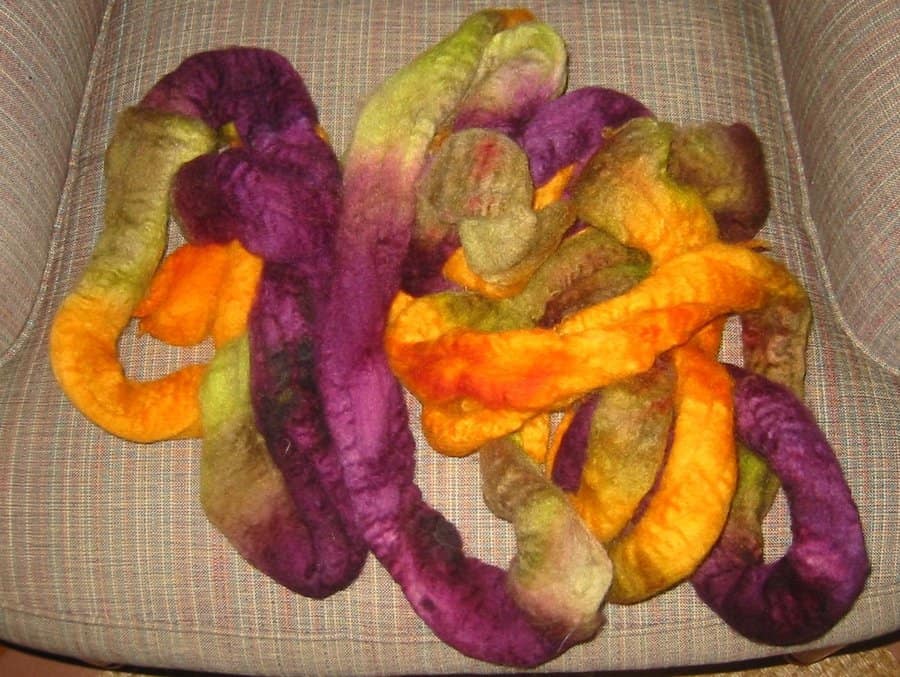 The first Secret Project can now be revealed!!!

Ted’s International Fiber To Scarf Exchange (TIFTSE)
Knitterguy Ted has coordinated an exchange these last two years, where you send off a cloud of fiber to him in December and some talented fiber-friend of his sends you back a completed scarf that they’ve made from your fiber. You also get someone else’s fiber and spin/knit/weave a scarf with it and send it to them…simply beautiful…no?

You never know who gets your fiber or who’s fiber you’re working with because Ted acts as the exchange agent and he can be so tight-lipped about these things.

I received the following bundle of joy from Ted in January. 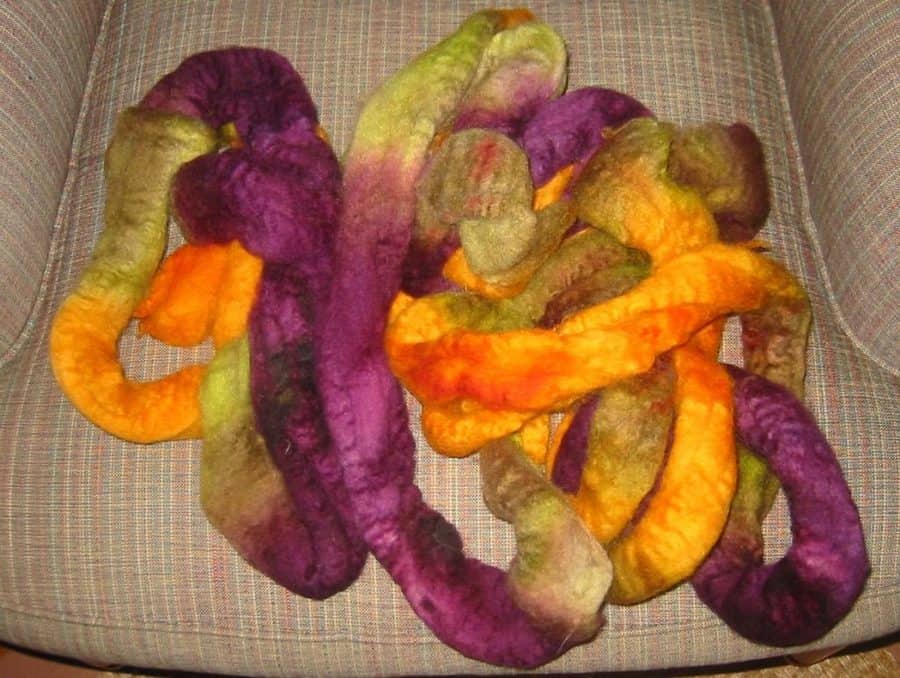 Actually, it was nicely rolled into a ball of roving, but I wanted to show the brilliant colors of StitchJone’s hand-dyeing skill. In addition to gorgeous colors, this yarn had a soft crimp to it and a luster that was like silk. 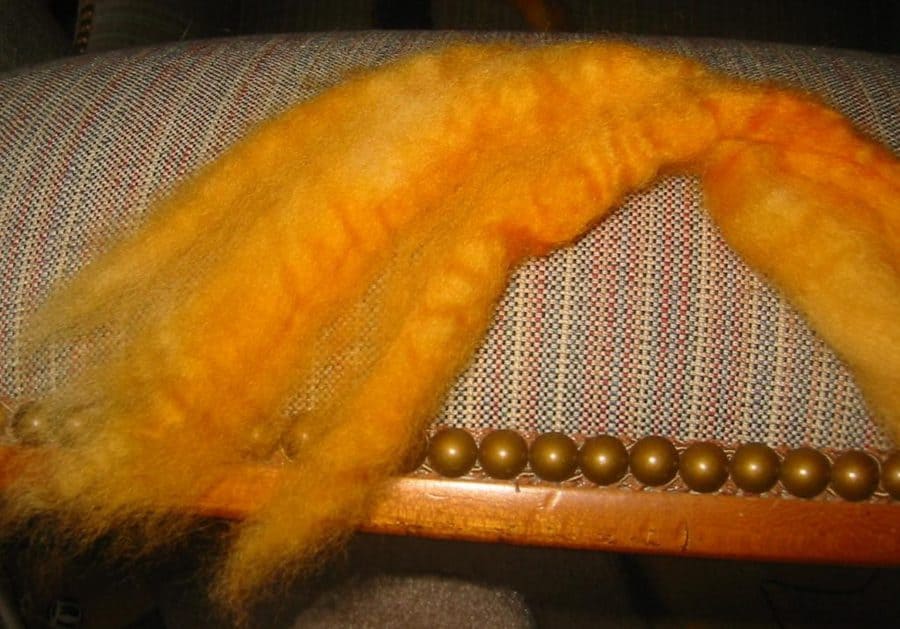 I knew immediately what I wanted to do with this.

My main goal was to keep the colors separated as much as possible, and also I wanted to spin it as loosely as I could to allow the yarn to keep as much of its natural texture as possible. I dropped everything and did a bunch of test spinning and doing small “makes” to see how it would look in a loose double-ply.

Once I was satisfied that I could do justice to this yarn, I split the entire roving length-wise into two quasi-equal balls of roving. 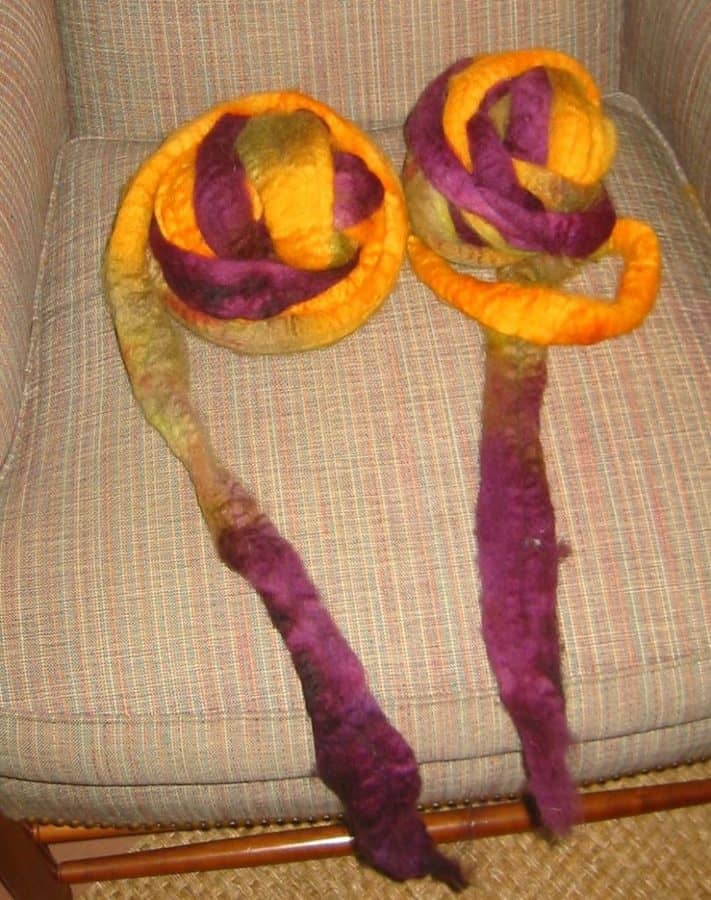 I figured I could spin a bobbin-full of singles from each ball and then when I plied, I would hope that the colors matched up and kept the colors separated. The singles spun up very quickly and in no time I had two quasi-equal bobbins of singles and I started the plying. 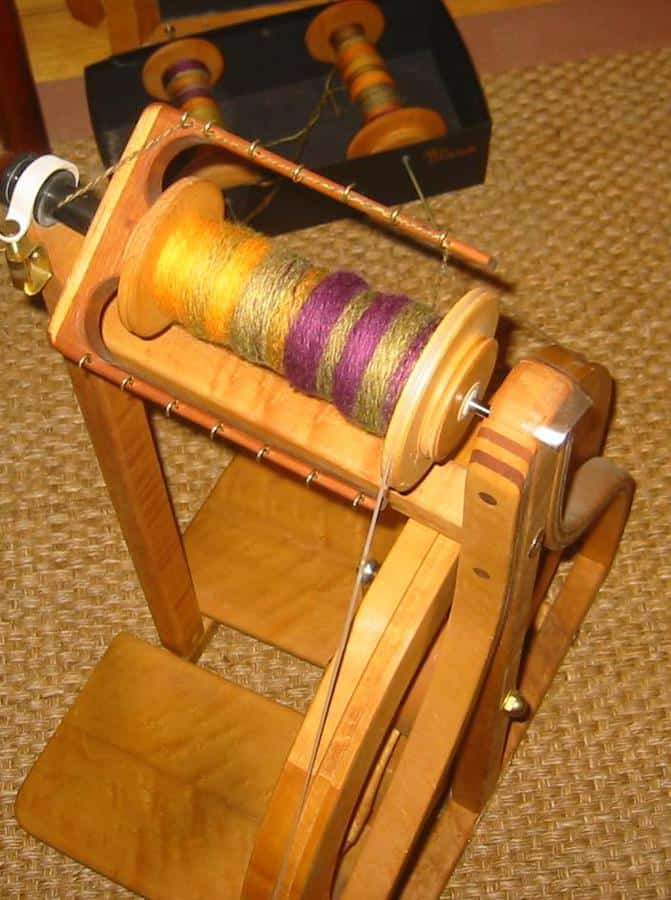 I found that it was necessary to synchronize the colors every once in a while, so every time I got to the end of the purple section on one bobbin of singles, I’d break off the remaining purple on the other bobbin, so the colors would synch up exactly again. I ended up doing this about 3 times during the plying, and I used the remaining singles of purple to double-ply for the final length of purple yarn. After plying the colors remained relatively separate except during transitional color changes. 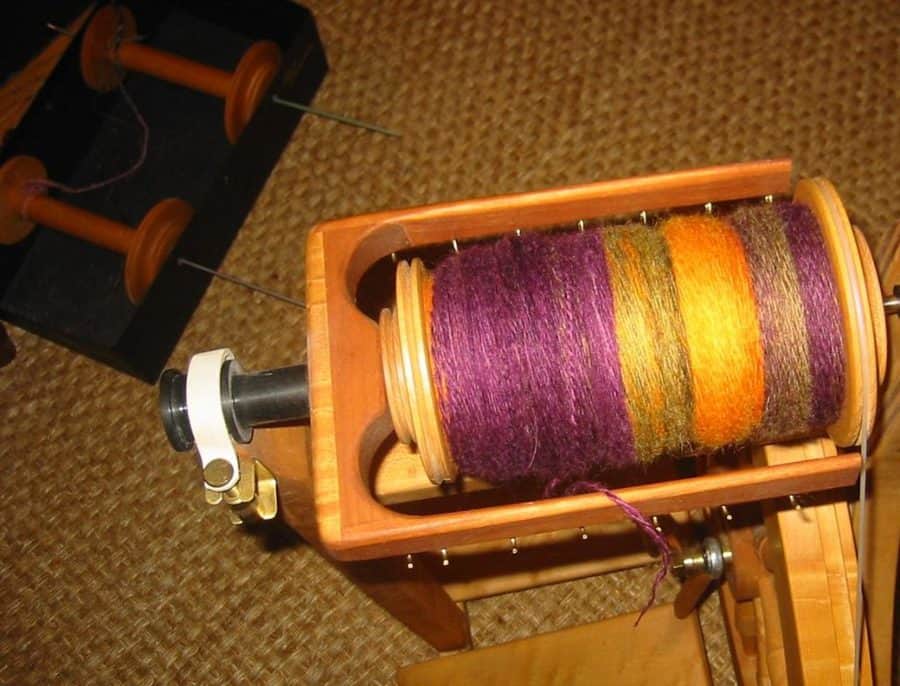 When I wound the yarn onto the swift, I realized the yarn maintained a lot of the natural crimp…I was thrilled with the result. 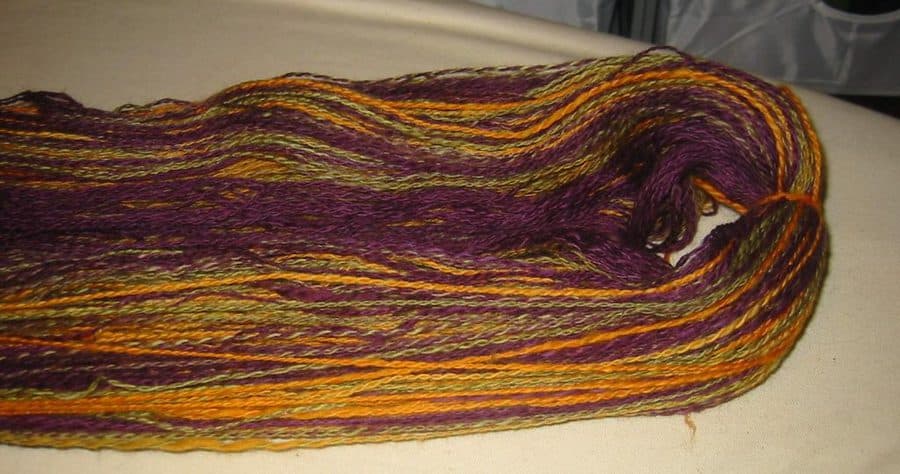 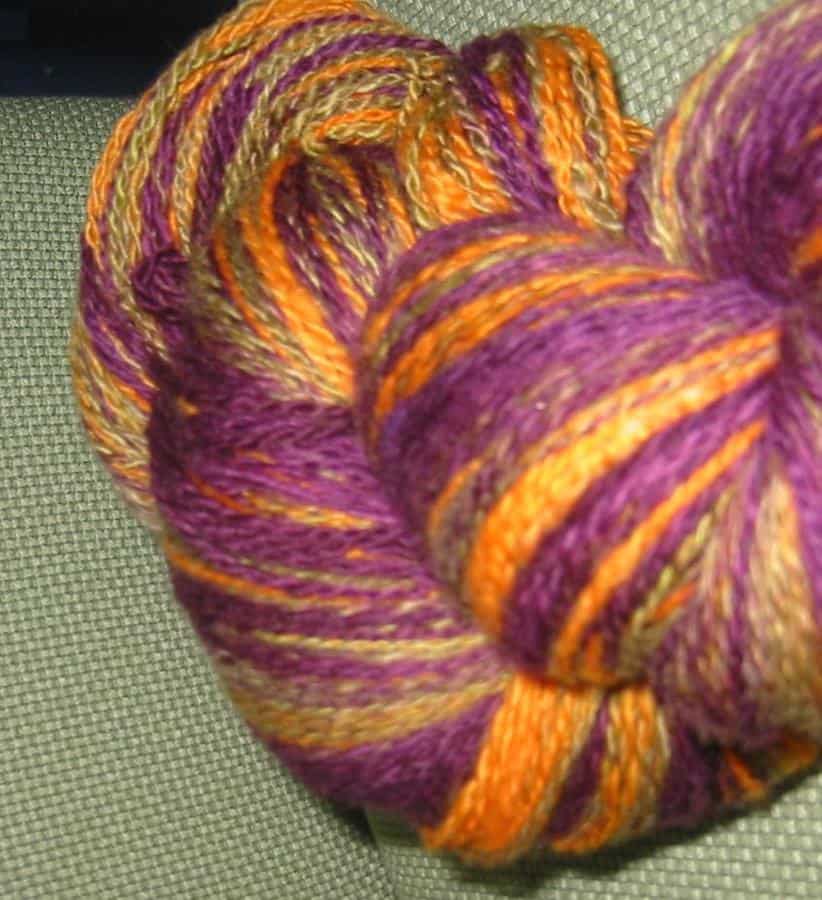 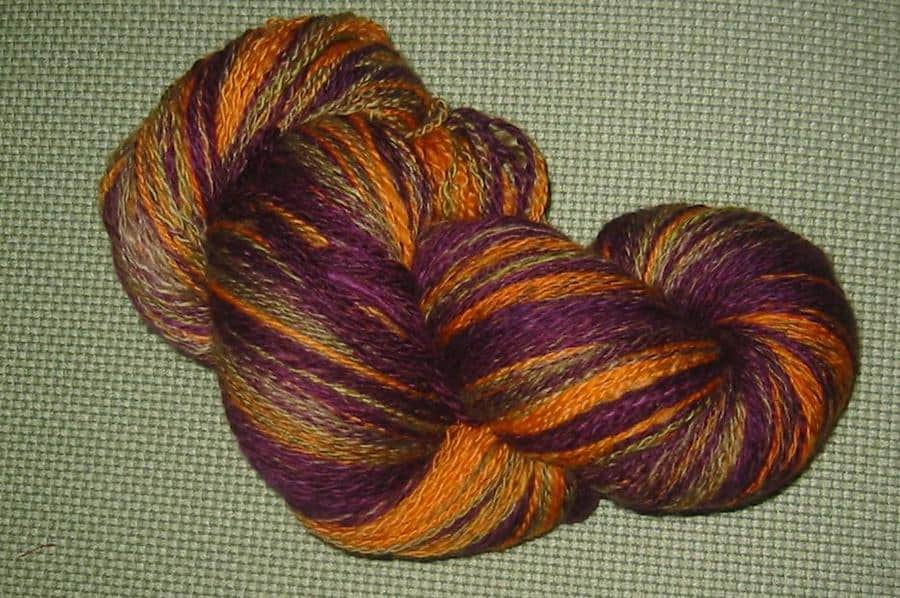 I picked a great stitch pattern from one of the Barbara Walker Treasuries, called “Sunspots” and added a little border pattern and created a six foot long scarf, that was soft and colorful and lofty and warm. 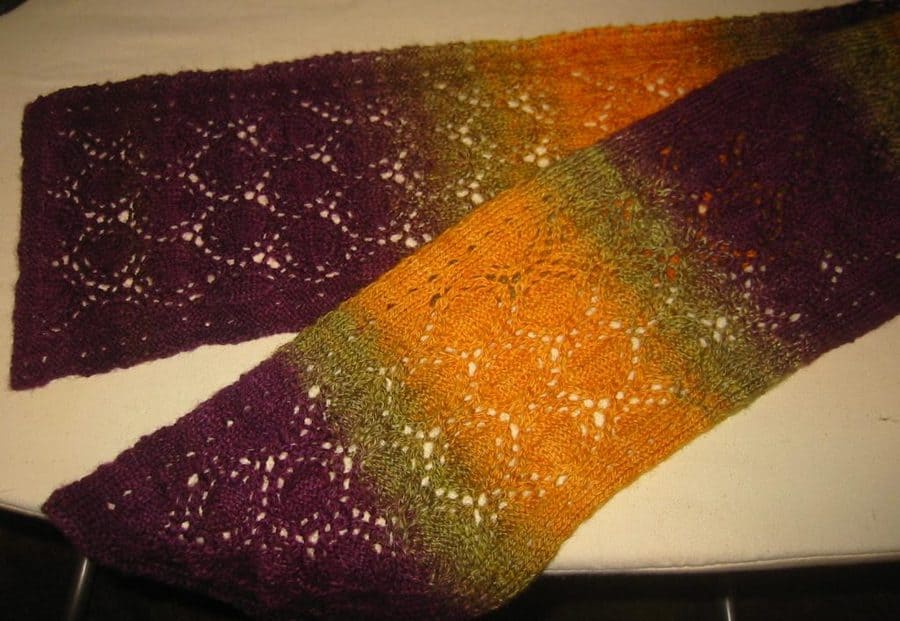 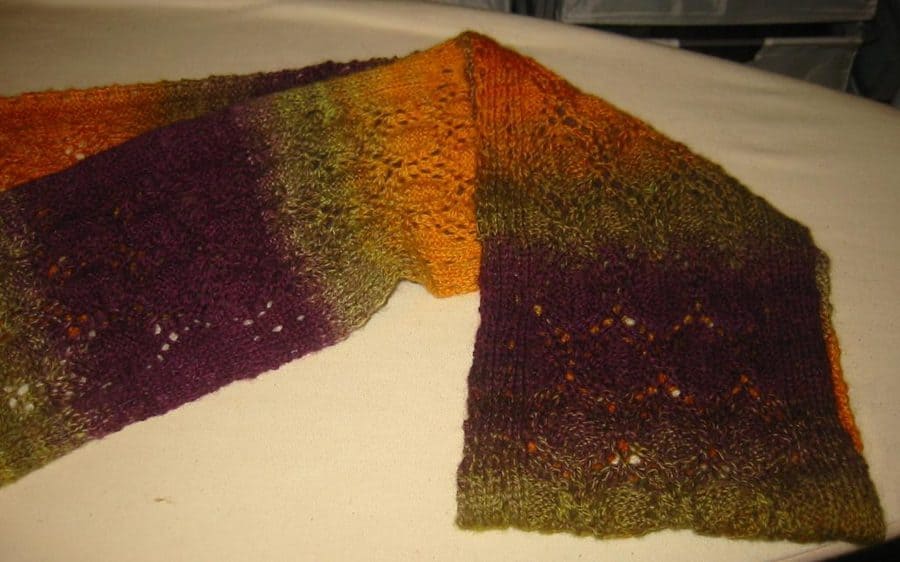 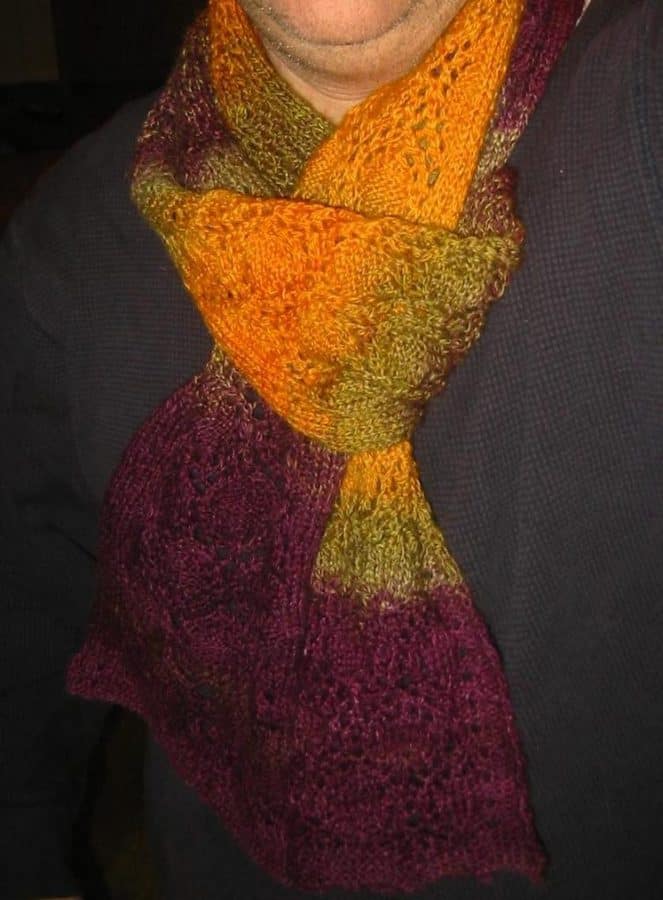 The only reason I’m allowed to blog about this now, is that the recipient has gotten her scarf, and she replied back with the following picture of “glee” (her word!). 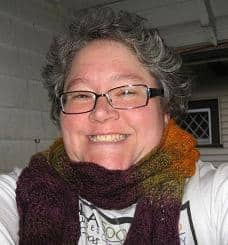 I realized all along, my main goal in making this scarf was the look on Duffy’s face. Check out Duffy’s Blog to see her experience of this.