What a bunch of useless chest-beating…I’d rather watch “news” stories about the Angelina-wannabe mother of octuplets for god’s sake!

How Much Money Are We Talking Here?
I know it’s unfair that executive ass-hats at AIG seemingly got paid bonuses for bringing their company to the brink of financial collapse…and got paid with taxpayer dollars.

But does it really require this amount media and governmental attention?

Jeezus…it’s REALLY small potatoes when compared to the true financial issues that this country faces…yet important congressional committees are wasting probably millions in bringing the AIG CEO in for questioning? This just doesn’t make sense to me.

Get on with important business already and let god or Karma take care of the ass-hats.

Current Knitting
I had a minor knitting catastrophe (and no, it won’t require a congressional committee review…thanks for asking).

Whilst taking the picture for today’s blog entry, I dropped about 30 stitches of hex mesh (for the Niebling aficionados among you) off my needle. Suffice it to say, silk doesn’t mind slipping a few rows when given the leeway to do so. 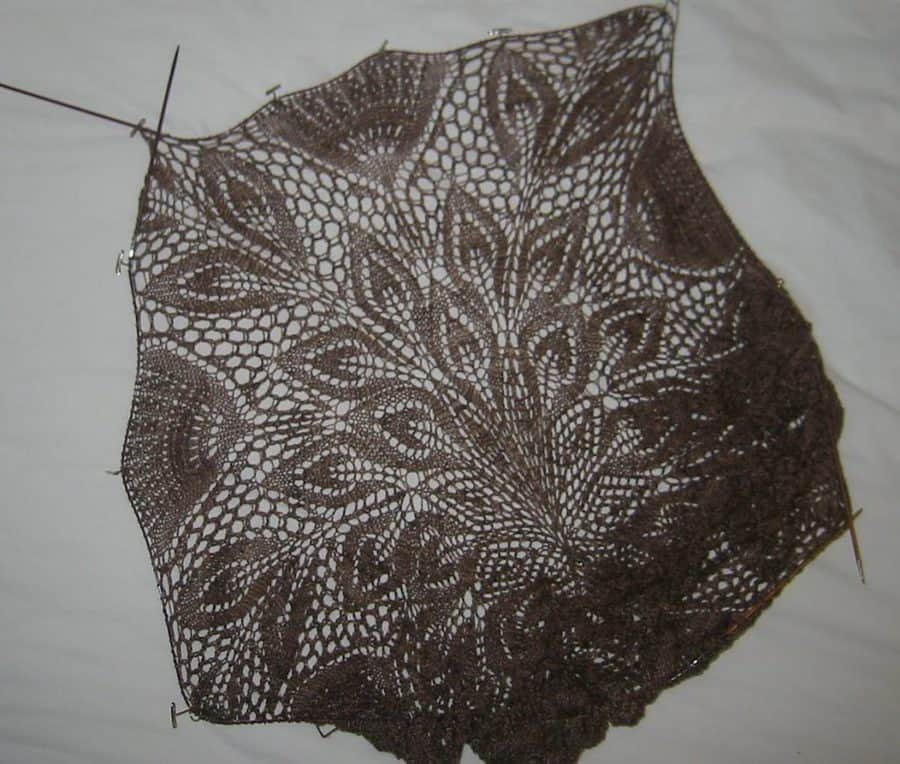 This was round 92 that I was taking a picture of…I’ll let you know where it stands as of the next blog entry. It will be interesting to test my knitting recovery skills.

Readers’ Comments/Questions
Regarding Duffy’s scarf, Mar asked (and Duffy answered in comments), “The pattern you chose was perfect. But, dear man, WTF is the fiber? Yes, it has the silk-like sheen but you didn’t mention what it is.”

I couldn’t remember what the fiber was, but it was in fact Blue Face Leicester. I’ve worked with BFL before, but I’ve honestly never worked with such beautiful BFL before…both the quality of the fiber and the dyeing. StitchJones only has a few more 4 oz BFL rovings on her Etsy site…I think there might have been a run on it after I posted about it.