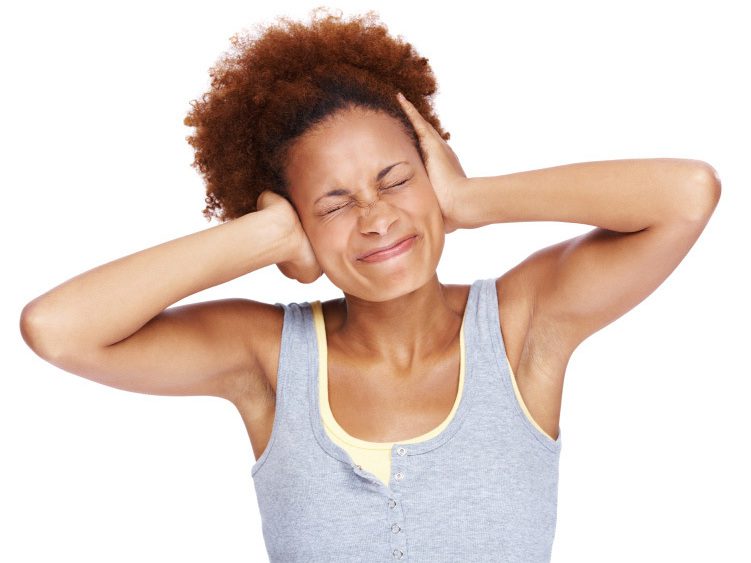 For those that have gotten a song stuck in their head that just wouldn’t leave, there is a term for that…“ear-worm.”

The Perfect Cure
This morning, I caught a brief snippet of the gay American Idol guy…forget his name…but can’t seem to forget the snippet of song he was singing…”Bridge Over Troubled Water.”

I don’t know all the words to the song, so I misplace and replace words, but it doesn’t stop the pain of having a song burrowing through my brain.

I’ve passed along this secret cure, which I extrapolated from a cure used for esophageal thrush by a man with AIDS in the late eighties. He knew he couldn’t drink beer or eat yogurt, because it would cause a yeast-based thrush to grow in his esophagus. However, whenever a more virulent form of thrush would occur in his throat that he couldn’t get rid of with simple techniques like gargling with salt water, he would purposefully drink beer or eat yogurt. This would cause a second form of thrush, which would kill the original infection, and then he’d gargle with salt water to kill the yeast-based version.

I thought this was a brilliant way of dealing with infection, by pitting one against the other.

So how does this apply to ear-worms you ask? Well, if I get a particularly virulent ear-worm, I realized I could find an even more awful song to kill the ear-worm, but it would have to be a song the would self-destruct in my head after doing its dirty work. And there is no better choice for this than ANY Barry Manilow song.

So next time you get an annoying ear-worm, start to sing “Mandy,” or “Copa Cabana,” or “I Write the Songs.” The original ear-worm will die by virtue of suffocation, and then you’ll be so disgusted by the BM song (kind of appropriate initials, don’t you think?), that the new ear-worm will commit suicide.

It’s such a tidy process, it’s amazing no one has published this solution already.

Current Knitting
I have now figured out how to transfer pictures from my cell phone to my computer, so I can at least have some form of pictures on the blog that I haven’t stolen from other internet sites.

First of all, I took a picture of the “alleged” sock so you could see I hadn’t lied and my photoshopped version was relatively accurate. 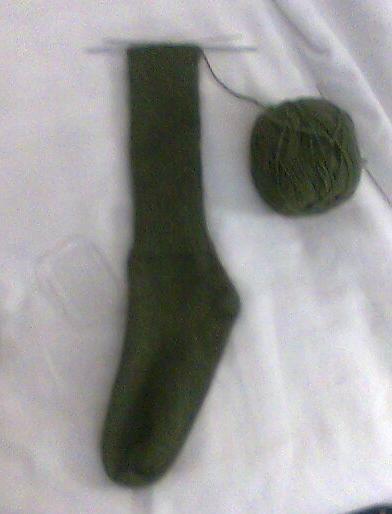 I also got some work done on the Niebling lace project. 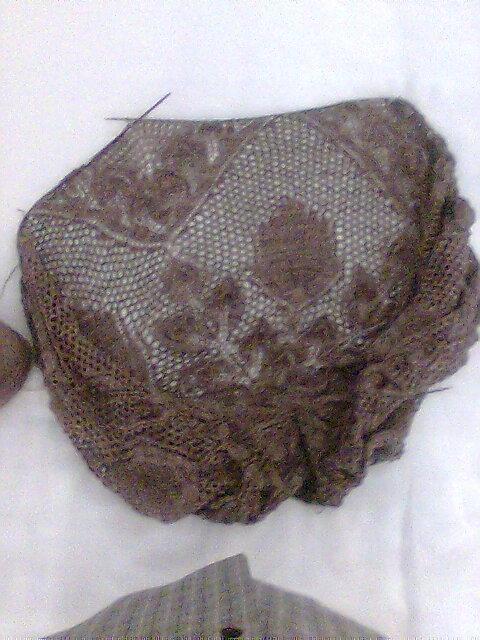 I’m currently on round 184. You can kind of see how the pointed arch of the design is coming to a…well…point, so it’s almost complete. Actually, there are 10 more rounds in the design before I do the crocheted bind-off. I anticipate I’ll be able to finish the knitting and the bind-off this weekend…I can’t promise I’ll be able to block it.

Readers’ Comments/Questions
Happy Earth Day, and thank you to the commenters who wrote so much more eloquently than I did on the contradictions of conservation in today’s world.

I agree…I just placed a follow-up order for four more balls of the green and the denim color as well. I also ordered some additional Araucania sock yarn from James’ shop, Joy of Yarn in New Zealand. The exchange rate still made my purchases quite a bargain, and the package arrives almost as quickly from New Zealand as it does from California.