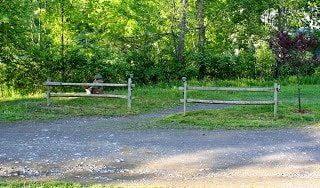 I miss being with the guys at the latest Men’s Spring Knitting Retreat and I miss the wonderful environment of Easton Mountain, but I’m still completely energized from the retreat too.

Best One Yet
I hesitate writing that this was the best Men’s Spring Knitting Retreat yet, because I don’t want to diminish in any way the experiences I’ve had at the four prior retreats (see prior years’ retreats blog posts listed/linked below), but I have to say that this one was the one that seemed to have had the biggest impact on me.

We had some amazing guys again this year…many from last year and a few who had been at earlier retreats but had skipped a year or two in between.

The biggest surprise to me this year was the impact of the new guys to the retreat.  I assumed they would incrementally increase the dynamic of the group by adding their specific personality to the group.  But instead, they seemed to act as a multiplier of energy and closeness.  It was truly a synergistic reaction.

Suffice it to say, I was able to re-affirm incredibly close bonds with some of the guys from prior years, and establish new friends with the new guys who made it there this year.

Travel Log
Overall, we had an amazing four days of men, knitting, spinning, crocheting, fiber processing, food and quite excellent weather for the retreat.

Each year, a few of the guys have come to Easton Mountain a day or two prior to the retreat, to relax and extend the time they get to spend in this magical atmosphere.  This year, we had about 25 of the 41 guys who arrived at least a day early.

The first day of the retreat was Thursday.  We had an unofficial visit to Battenkill Fiber Mill, where we got a tour of this wonderful skirting/scouring/picking/carding/combing/drafting/spinning/plying/skeining/coning mill (did I miss any of the steps?).  About 30 guys went on the tour and the staff couldn’t have been more pleasant.

I took photos on my iPhone as I forgot to bring my camera on the tour, but I figured you’d rather see bad photos than no photos of the event. 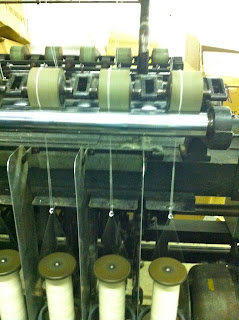 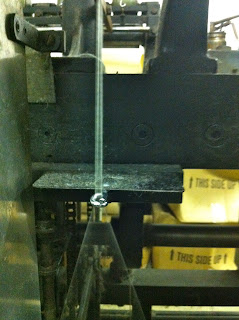 Finally, a brief movie of the plying machine

Links to Prior Blog Entries for MSKR