A Second Political Blog In a Row

I try to intersperse some of the more political blog entries with non-political ones.  Today’s was too important not to write today.

1.  U.S. Politics . the dividing of a state, county, etc., into election districts so as to give one political party a majority in many districts while concentrating the voting strength of the other party into as few districts as possible.
Having spent a lot of my time in Upstate New York, I’ve had the opportunity to watch politics in that state, and I even had the opportunity to befriend the NY State Senator from lower Manhattan, Tom Duane (a truly amazing man). Unfortunately, despite the good work of people like my friend Tom Duane, the state senate become a cesspool of scumbags.  Especially now that the Republicans have taken over the state senate.
As part of their power-hungry shenanigans, they have redistricted the 46th District in New York State (parts of Montgomery, Schenectady, Albany and Greene counties) so that a particular Republican candidate could run without any competition. I had the opportunity this past weekend whilst at the retreat to meet someone that thinks this is wrong.  So wrong, in fact, she decided to run against the presumed winner.
Cecilia Tkaczyk, is a former legislative analyst for the New York State Senate and is currently the Board of Education President for Duanesburg Central School District, and thought it was wrong how the Republicans have tried to cheat the system.  She decided it was time to do something herself.  She’s smart, passionate about what’s right and seems to be gaining a lot of momentum in the race.  She’s also a sheep farmer, which is how I was fortunate enough to meet her.
If you’re in the Montgomery/Schenectady/Albany/Green county area, please tell your friends about Cece and make sure you and your friends vote for her.  Since I can’t vote for her, I did the next best thing and contributed to her campaign.
Grass roots politics affect us all, and the more correct-minded folks we help put into office the better off our country will be, otherwise the 1% will continue to walk all over us.
Current Knitting/Crochet
I have to say, this 10 stitch Tunisian crochet is an enjoyable project…meditative and addictive.  I’ve only added a bit more to the blanket, but I’m enjoying every row. 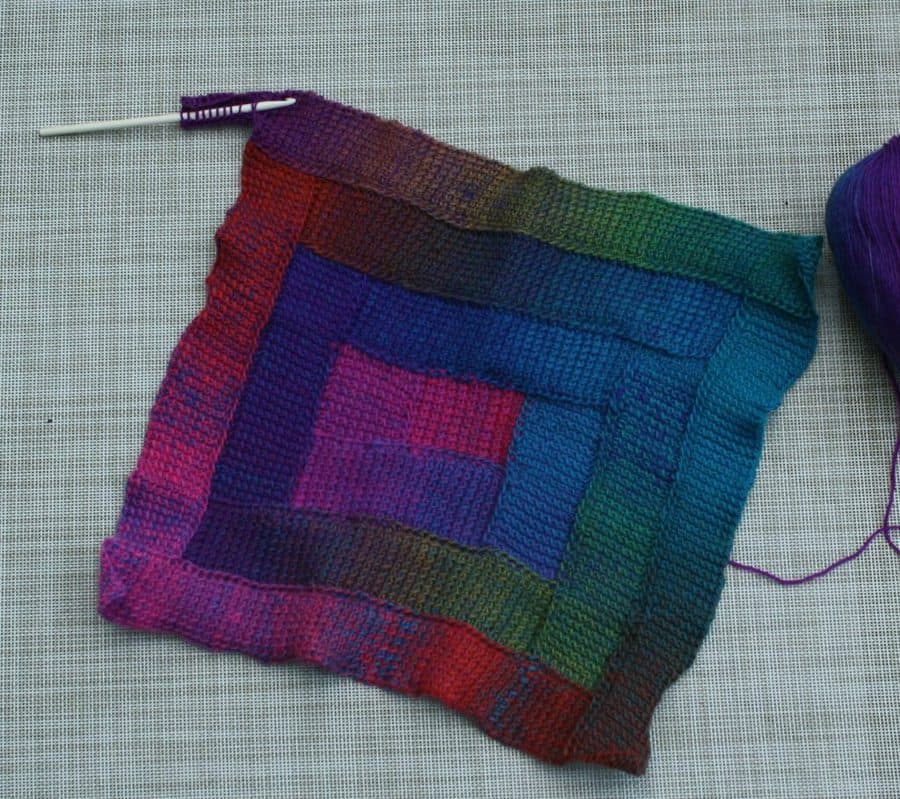 Picture this baby blocked and bordered with some nice satiny edging!
Readers’ Comments/Questions
Leslie asks, “Can the yarn you are using for the baby blanket be washed AND dried.”
It’s 75% wool and 25% nylon, and similar yarns I have been able to both wash and machine dry.  But I’ve never tried it with this actual yarn…anyone else know for certain?
Deborah writes, “Can you tell us the source of the roving and spindle?  I’ve just started spinning and although I’m not at that level yet, I’d love to know where to find it as a sort of carrot: “Learn to spin romney and then you can spin merino… and ultimately, pygora/silk/merino blends on olive spindles.”  Oh, that’s lovely.”
Thanks Deborah, I fully meant to include links to the sources for both the pygora/silk/merino and the olive-wood spindle…here they are:
Gorgeous Roving – Rainbow Farms Pygora – http://www.rfpygora.com/
Gorgeous Spindle – SpindleWood Co – www.spindleWOODCO.com
Uncategorized