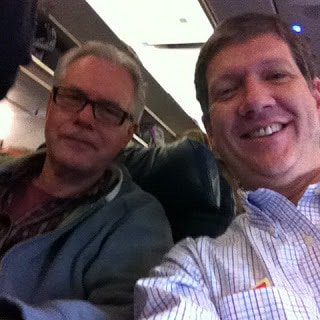 Happy Anniversary To Me and Thaddeus!

Retrospective
If I had any memory whatsoever, I’d be able to do a year-by-year retrospective that would allow blog readers to skim through it, trying to glean anything of interest.  All I’ll bore you with is how we met.

It was a Friday night, and my friend Bruce and I had gone down to New Hope to the local disco (you have to remember, this was the early ’80’s)…it was a decaying club in a putrid pink building called “The New Prelude” (trust me, the old Prelude wasn’t anything great either.  I had had at least two cranberry juice and vodka’s from Mary, the bartended at the back bar (because she made drinks with way more alcohol than juice) and Thaddeus came up and asked me to dance.  I mauled him a little on the dance floor by undoing his shirt buttons (I wanted to see just how hairy his chest was) and then we chatted for a while and made a date to meet the following Sunday morning back in New Hope to walk around town.

I ended up not going to meet him and I didn’t have a phone number to cancel, so I stood him up.

Feeling badly about how rude I had been, I went back to the New Prelude twice a week for four weeks, looking to apologize, not even sure if I’d recognize him (I was a bit drunk and it had been four weeks!).  Finally he showed up on a Wednesday and I got my chance to apologize.  We made a new date (which I kept), and the rest is history.

Happy anniversary to the love of my life.

Current Knitting/Spinning
I added one 8-row stripe to the Milano Blanket and started a new spinning project.  I’ll post about it in the next blog entry.

Readers’ Comments/Questions
Teresa asks, “What stitch pattern are you using for your Milano blanket? I really like this and would like to give it a try”

It’s a stitch I read about on the internet from Brenda Dayne (one of the first knit podcasters).  It’s a very simple 4-row repeat where the 1st and 3rd rows are the same except offset by one stitch and the 2nd and 4th row are just purl rows.  Head over to her website here to get the stitch.  It’s a good read too.