One of the knitting design books used to have you knit this odd pitcher-like piece of knitting as a way of teaching you multiple techniques in knitting and sweater construction. Wasn’t that The Sweater Workshop?

The Extensive Simplicity of Sock Design
I started a new sock project and I’m tweaking my standard design so that it will more exactly fit Thaddeus’ foot. He has a slightly longer, more slender foot and a much slimmer ankle and calf.
While he can fit into my standard sock, I figured I could tweak it along the way to make it custom fit him. I obviously used a few less stitches on the foot and made it longer. I also used a slightly narrower toe.
The heel was also done more narrowly, even though the gusset increased the same number of stitches. I rounded the bottom of the heel a bit more than usual and finally made a thinner ankle and increased a little into the calf.
I realized that if The Sweater Workshop had used a sick instead of some useless hobo bag shape, a knitter could have learned a shit-load of techniques and still had a sock at the end of the lesson
Current Knitting
So here’s the sock I’ve been sculpting so exactingly. 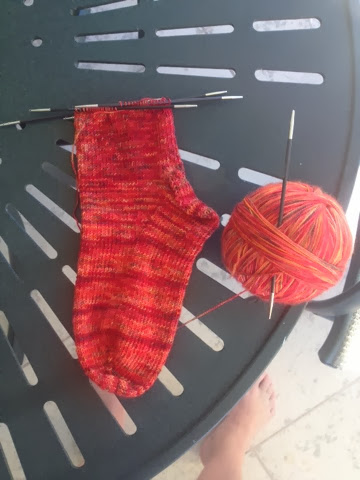 I know, it looks like most of my other sock projects, but hopefully it will fit Thaddeus perfectly.
Cancun sock Thaddeus the sweater workshop