Despite having grown up in a world that wasn’t always very supportive of an alternate sexual orientation, it still amazes me to hear about racism or sexism or other forms of bigotry.

With Donald spreading filth and attracting all the cockroaches of bigotry, the hatred is starting to become a lot more public.  To hear a congressman yesterday say that Donald’s statements about the Federal Judge of Mexican heritage were “too racist”, I could only think…what is an acceptable amount of racism?  I mean really.

But regardless…before Donald allowed KKK members to come out and rally without hoods, I really ran into very little outward forms of bigotry.

I remember chatting with a Chinese-American guy at his family’s Chinese Restaurant once and I was amazed to hear that when they ran the restaurant in Illinois, he was constantly facing racist comments and actions.  I mean I was shocked to hear this.

And then Linda Pratt posted the following to Facebook today:

When I was nine, in fourth grade, I wrote a book report on becoming president. I also sketched my inauguration gown, inspired by Hans Holbein and Tudor history. No kidding, it had a squared neckline and empire waist.

I went to school at a time when feminism and equal rights were belittled. I had an ERA bracelet that I wore every day. When it broke at the R, my father asked one of the machinists at GE in Bangor to solder it, and I wore it for another year. I am sure I was the only girl in my school that has a subscription to Ms Magazine. I kept reading that magazine for twenty years.

Tonight it’s not me on the podium, and the woman there is not the most perfect human, by far, but neither am I. Yet tonight that nine year old became actualized.

Thank you Shirley Chisholm, Barbara Jordan, Ann Richards, Geraldine Ferraro and all other women of all parties that have paved the way.

Some of my friends may not agree with me. That’s ok. I respect what is in your head and heart as I hope you do mine.

I’ll always remember coloring that dress on the cover of the book report.

These two incidences in my life made me realize that I really have no idea what the struggles of others are many times.

I’m grateful for the opportunity to open my mind further any time I get the chance. 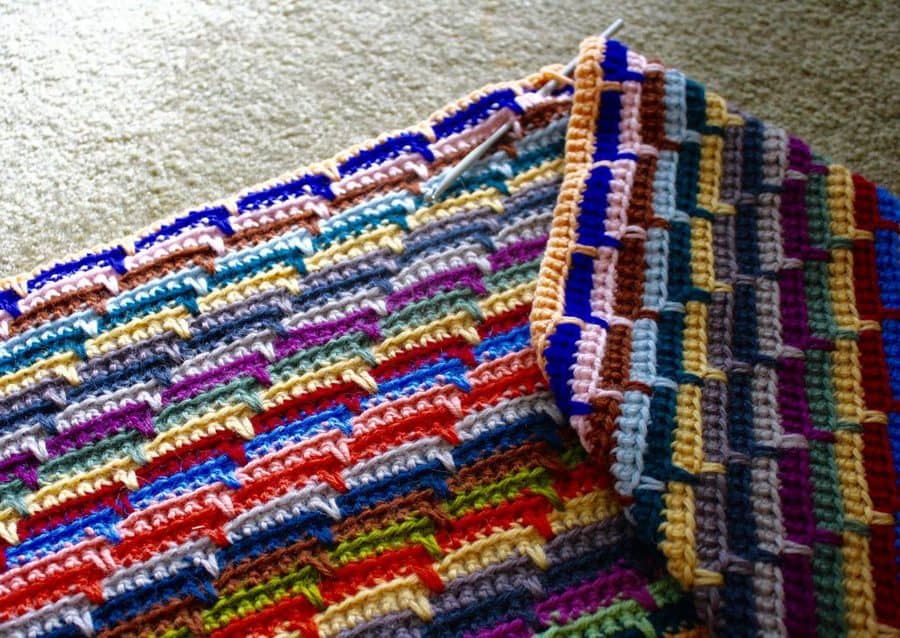 I still have quite a bit of work to do on this wonderfully colorful blanket, but it’s mindless and enjoyable crochet to do.