When is someone or something “due respect?”

Based on Title or Behavior?

Perhaps it’s different in a monarchy, where certain positions demand a certain amount of respect.  I’ve never lived in a monarchy, so I definitely don’t have that mindset.

Perhaps, my disillusionment with automatically granting respect to priests, monsignors, bishops, cardinals and popes in my religion-of-upbringing has brought me to different way of thinking on this.

Perhaps it’s the fact that much of my corporate life was in organizations where respect was given based on a person’s performance and it wasn’t conveyed along with a promotion or title.

But I don’t understand all these sheeple who tell me not to disrespect the President-elect because he somehow deserves my respect.

Honestly…I didn’t support him in the elections, I didn’t vote for him, and I truly believe that his election should be declared illegitimate based on the influence of Russian hacking on the election, and based on Comey’s odd behavior about going public about an investigation on Hillary Clinton.

I also vehemently oppose to his complete disregard for the Constitution, when upholding its standards is really what the job is all about.  He seems to be against most civil rights I hold dear, he has threatened the freedom of the press in ways that is terrifying, and he has encouraged hatred toward women, minorities and the disabled.

And to the people that tell me I should respect the office of the president, I have two things to say.  First, I didn’t hear a single word from those same people when photos or cartoons of President Obama and his family were displayed widely showing them to be bigoted caricatures of African Americans, or with a Hitler mustache.  Or when a speech of President Obama’s was interrupted with “Liar!”  Second, I will respect the office of the President as much or more than the incumbent does.  Donald seems to be treating it as badly as he did the businesses he stiffed on payments or the students he cheated out of an education.

So, no…I do not respect Donald.  And I won’t until he does enough to earn it.

The Easton Logo blanket suffered a minor setback (is any setback minor when it comes to intarsia?). 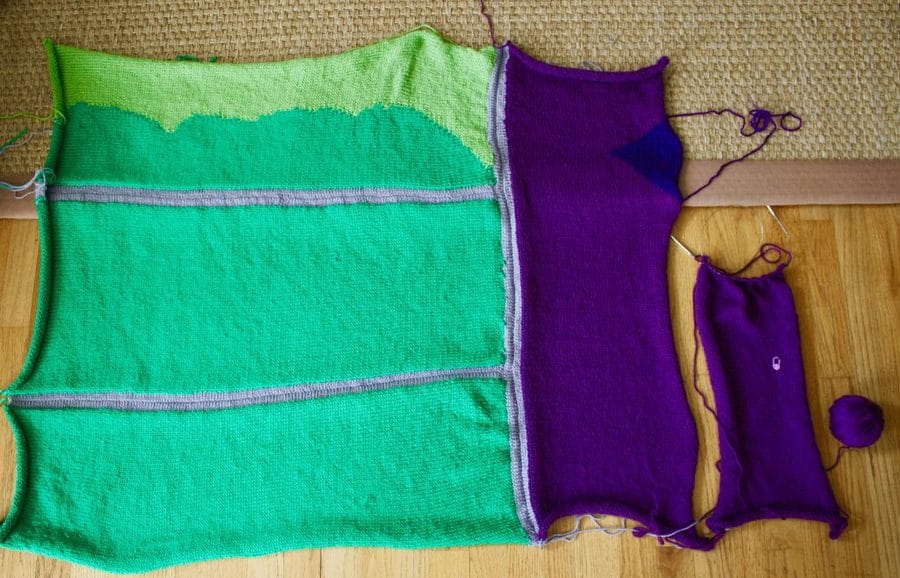 I didn’t like the color that I chose for the “sky” portion in the first purple panel…I thought it was too red, so I ripped it out and replaced it with the same color as the “mountain” in the foreground.

I recouped all the knitting from the ripping-out and also attached the first purple panel and I’m much more pleased.  It will look even nicer once the inferred border of the top of the mountains is embroiders in a darker color.