One of the few areas where I agree with my regressive/conservative citizens, is that Obamacare or the Affordable Care Act should be repealed.

Honestly, given that even the Democrats had to pander to the insurance company interests, the ACA was probably the best possibly way they could have put in place a program that would have helped to meet much of the criteria for healthcare in this country (ensuring adequate coverage, covering all citizens, reducing costs, etc.).

But if the insurance lobby wasn’t as influential, you and I both know they could have just added a Federal option to buy into Medicare as one of the health insurance options for people in the exchanges.

And they still should.

Currently Medicare insures about 44 million seniors.  They have established negotiated rates with healthcare providers, have claims processing procedures in place and understand how to run an insurance organization as well as any of the greedy fucks like Aetna or US Healthcare.

Hell, why not even let Medicare compete as a profit-based insurer for those under 65 years old?

That way, when companies like Aetna try coercing our government into complying with a merger that would make them practically a monopoly or face having them pull out of multiple states in the ACA exchange (which is what they did…greedy fucks), then people would have other options…or at least one other option.  Especially when the CEO of Aetna is getting paid over $25 million dollars a year to extort our citizens.

As it looks like this Republican nightmare of AHCA looks like it will pass, and an aged/poor tax will be imposed on those least able to afford it and paid directly to the richest people in our country…I’m hopeful some brilliant minds in the insurance industry with any level of integrity will create a new insurance company that will be non-profit and somewhat more affordable than the proposed AHCA options.

Otherwise, we’re going to have millions of our friends and neighbors dying penniless so that our wealthiest can grow their riches.

I know political blog posts here at QueerJoe aren’t always the most encouraging to read, but sometimes I feel I have to make sure everyone understands what’s at stake.  So to help make this post a bit brighter, I present a new, colorful project. 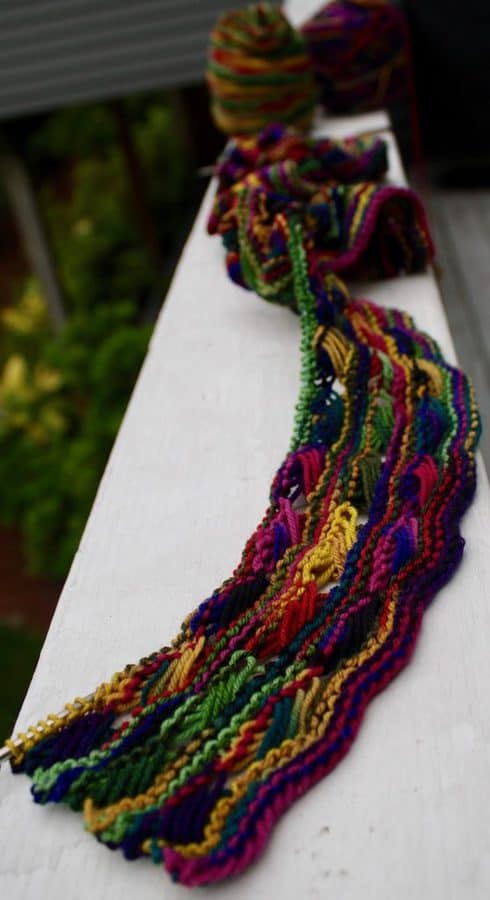 I’ve started a new Cross Stitch Scarf using two colorful sock yarns and the resulting scarf is turning out to be a cacophony of color that I am quite pleased with.