Donald wants notoriety and diversion and the media wants ratings and associated advertising fees.  And the public gets screwed.

Years ago when I was trying to grow blog readership and increase my share of knitting viewers in the blogosphere, I came up with a brilliant plan.

The Knitting Curmudgeon (Marilyn Roberts) and I were friends and we both wrote moderately popular knitting blogs.  We decided it would be a great idea to have an on-line feud that was so vitriolic and nasty that blog readers would be enthralled and would be waiting with great anticipation each of our responses to the other’s latest on-line insult.

It was going to be epic, and a complete fake.

I’m quite glad we decided not to do it.  I was honestly afraid that Marilyn and I didn’t have the same ideas about what was fair game in this little charade and one of us might have gotten offended.

You can see where I’m going here…the media is doing the same thing.  They get in a vitriolic war with Donald and both parties win, bigly.  Donald diverts attention from the nefarious shit that he’s trying to do, and the media garners the eyeballs they so desperately crave.  Win – Win, right?  Except the public gets screwed.

The media needs to stop reporting on anything that Donald says or tweets that doesn’t relate to real news.  Those who support Donald are going to support whatever Donald says or does, and those who don’t support him are going to just add his latest tweet to their myriad of reason for why he’s a complete buffoon.  And that’s not news.

The media needs to do it’s job and report on what policies and legislation and foreign agreements this man promotes or accomplishes.  Not his latest gaffe or stupid tweet.

It’s time to realize that a fake wrestling video, photoshopped by Baron, isn’t news or interesting anymore.  It doesn’t impact anyone.

So stop reporting this stupid shit. It’s tired and I’m going to stop watching and look for a news outlet that reports actual news.

The work on the Old Shale Koigu wrap continues. 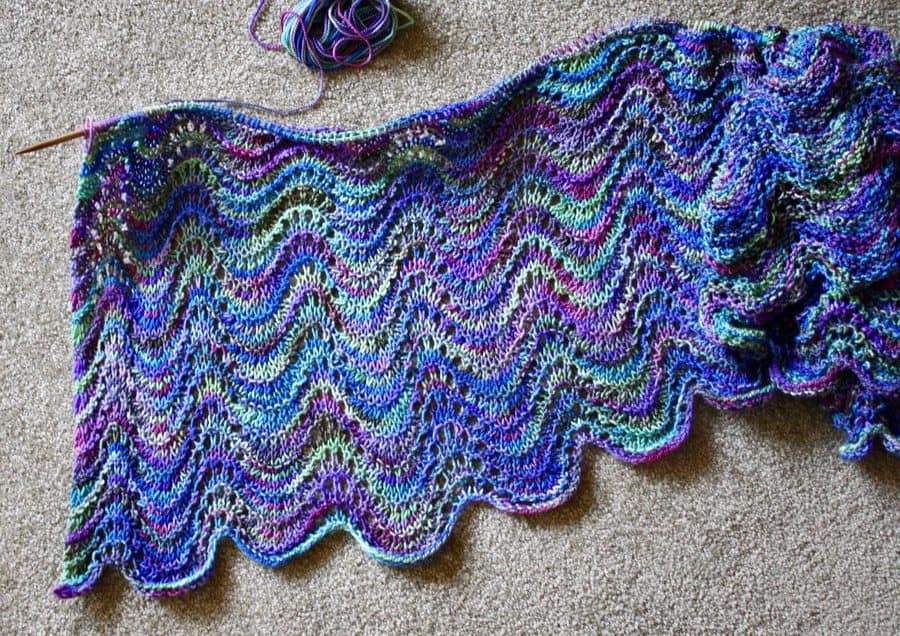 I am absolutely loving this project.  The colors are vibrant and gorgeous. The resulting wrap will be truly glorious.  I can’t wait to show you a photo of the full project when it’s complete.