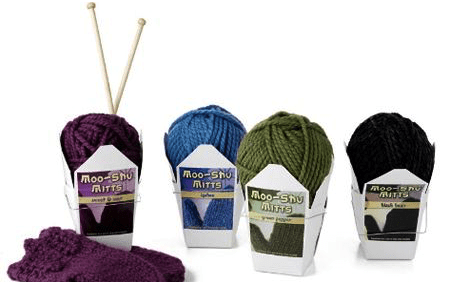 Even when it’s a small craft show business, there are many aspects of business that come into play.

Last year, I attempted to sell my hand knits at a couple of different local artisan/craft fairs and did reasonably well…at least well enough to encourage me to continue this year.

Since I’d prefer to have people interested in buying hats and scarves and warmer weather items, and I’d also prefer to leverage the holiday gift-buying impulses, I only sell at craft shows in October, November and December, so I’m preparing for those shows now.

With remaining inventory of about 50 items from last year’s shows and approximately the same number of items knit since then, I have about 100 items to put out for sale so far.  Ideally, I’d like to double that, since typically a vendor doesn’t sell more than half of their inventory at a show, but I don’t think that will really be feasible.  In between craft shows, I also need to replace sold inventory as quickly as possible for the next show.

Another goal based on last year’s sales was to try and create a small knitted item that I could sell relatively inexpensively so buyers could purchase something for $10 or less at my table.  I considered small Christmas stocking, mittens and coffee cup cozies.  I opted for the coffee cup cozies. 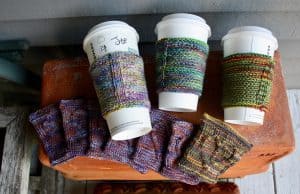 Mostly I’ll be using up leftover sock yarn to make them, so there’s little to no materials cost and I’ve gotten to the point where I can knit them up rather quickly.

I just have to decide on pricing for them.

Regardless, I’m going to try and have about 50 of these completed between now and my first show and I’ll probably display them on coffee cups like shown above, but sell them on small cutouts like this: 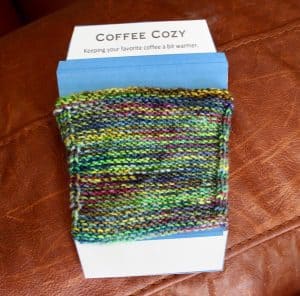 We’ll see how it goes!

I was working on a hat that I hated, so I frogged it and I am still working on a scarf that I’m not thrilled with, but here is what I’ve knit since my last blog entry on Monday. 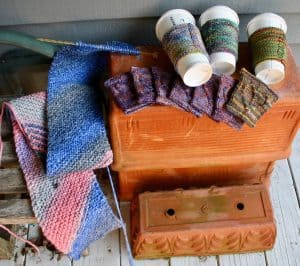 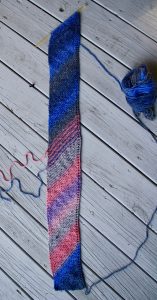 The scarf is just a garter stitch biased scarf using two different colorways of yarn.  It’s turning out to be a mishmash of transgender and leather flag colors…kind of a niche market if that’s what you’re looking for.