Normally when I need help on something that requires massive internet research, Thaddeus does that for me.

When It Comes to Cell Phones…

Unfortunately, I live with someone who is cell phone averse and only carries a go-phone for emergencies (which I insisted on).  So I can’t rely on him to help me make basic decisions on wireless carriers, mobile phones and data plans.

Recently, I finished up a two-year contract with Verizon with a data plan the gave me very little data, but it was the cheapest plan they had for an iPhone.  I ended up paying around $70 a month…which I recognize isn’t very much.

But once in a while, I would find that my phone was using up data while I was outside of WiFi range and I’d be hit with $15 per gig of extra data.  But honestly, it wasn’t very often this happened until recently, something has changed and I’m going over my minimal data limit almost every month.

I decided it was time to look for either a larger data plan with Verizon, or switch to a different carrier where I could get more data for not much more money.

Trying to ferret out the best deal was dizzying!

I finally realized Verizon has some newfangled data plans which will increase my data plan to 5 gig a month for LESS than I’m currently paying each month!!!!  WTF?!?!

I do like Verizon and their customer service was very helpful in comparing and switching to the new plan, but I sure as hell hope I don’t have to go through this again any time soon.

I finished the latest Color Block Scarf in “brights.” 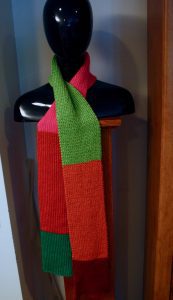 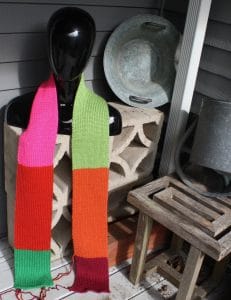 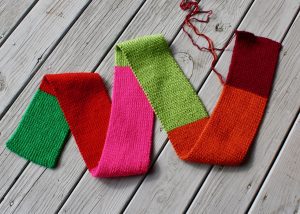 I still have only a few ends to weave in (I’m really enjoying keeping up with my weaving-in process as I progress on a project) and I love how it turned out…I know it won’t be everyone’s cup of tea, but I love when I can use odd color combinations and make them into a garment that looks nice.