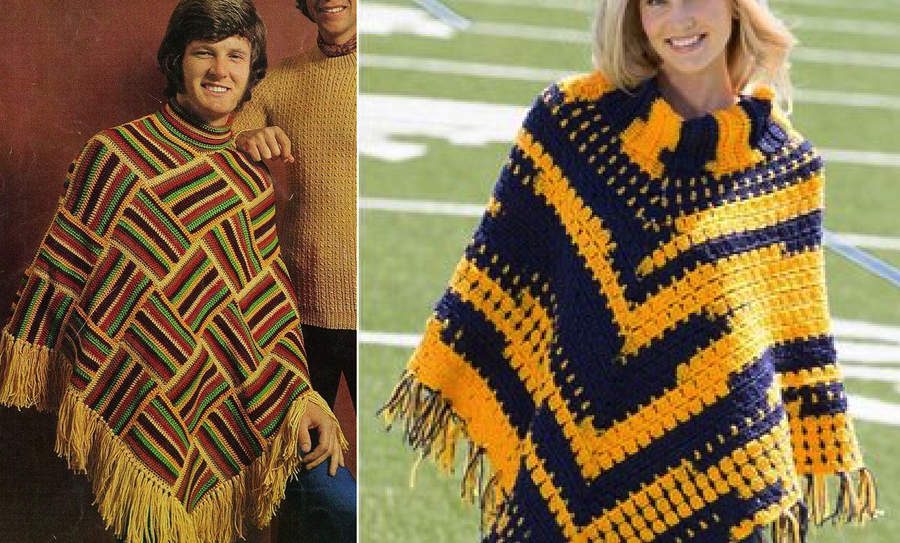 Crochet – The Ugly Step-Sister of Knitting

I primarily identify as a knitter and I have sometimes relied on old ideas about crochet to make fun of the craft.  But truth be told, I find crochet to be an incredibly useful technique in my bag of designing tricks.

There was a time when most knitting and crocheting magazines had some of the ugliest designs, and I have to admit that during that time, an ugly poncho that was knitted wasn’t quite as ugly as a similar crocheted version. 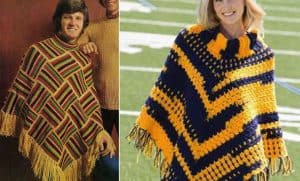 I also recently made a joke in one of my on-line forums that might have indicated I’m a knit-snob who looks down my nose at crochet, but that couldn’t be further from the truth.

A friend of mine who is a master crocheter/designer told me once that crochet fabric is typically about twice the density of knit fabric, so you typically want to use finer gauge yarns when you crochet a garment.  There are exceptions, but during the 70’s when worsted weight Pound ‘o Love yarn was all the rage, crochet did a bit more badly in reputation than knitting.

But that’s changed…as yarns and techniques have evolved, crochet has become an incredibly useful tool for creating fantastically stylish garments.  A perfect example is the latest book, Modern Tapestry Crochet by Alessandra Hayden.

First of all, I have attempted tapestry crochet in the past, and I really didn’t understand what I was doing (I learned that from this new book, which describes it extremely well).  Tapestry crochet is a method for using multiple colors in a crochet garment, changing the colors in the middle of a row, without showing any floats or “wrong sides” of a garment.

Below are a dozen designs from the book that I thought were quite good, so I’ve created a blog contest…enter the blog contest to win a free copy of the book, Modern Tapestry Crochet.

To win a free copy of the book, leave a comment or send me an email at queerjoe@comcast.net telling me which of the 12 designs below is your favorite.  Whoever selects my favorite design will win the book…simple as that.  If no one picks my favorite, I will send the book to whoever picks my second-favorite…and if multiple people pick my favorite, I’ll randomly select from the multiple people with fine taste!

Enter by Friday of next week (the 29th of September) and I’ll notify the winner shortly there after.  If you already have the book, or you’d prefer someone else won it and you’d still like to play, just note that in your e-mail or comment.

Good luck to all.

Curtis, who helps Rusty organize the South East Men’s Knitting Retreat posted a couple of crochet scarves he’s made using a stitch called the Mini Bean stitch.  I really liked the way the fabric looked, so I watched a YouTube tutorial and actually swatched (yes, I swatched and even washed the swatch!). 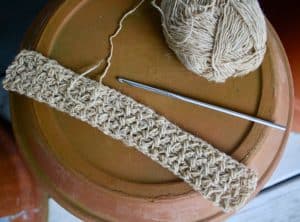 I enjoyed the stitch so much, I decided to start a scarf of my own with the closest unused yarns I could grab without leaving my seat. 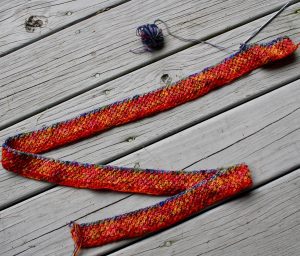 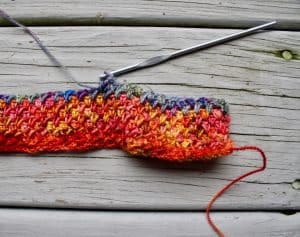 I also started a second scarf in the original swatch yarn (an old discontinued Rowan wool made in Yorkshire that feels like very fine handspun). 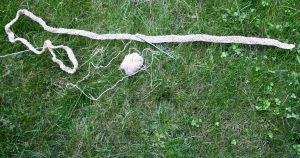 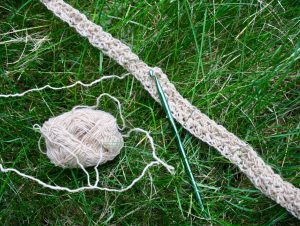 I opted to used a larger hook than I’d originally swatched with (see?!?!…it helps to swatch!).  The color scarf seems a little dense and I’m hopeful that it will loosen up when I wash and block it.

Julie writes, “Oh, Joe, I love the booties! Is that an original pattern, and if so is it on Ravelry?”

The design is based on a Ravelry pattern by Marianna Mel called Baby Hug Boots. It’s a free pattern and it’s extremely well written.  I’ve only made slight modifications to make it a little easier to knit up lots of them.