It’s been a year since I retired and I wanted to acknowledge this important milestone.

As I was readying to depart my last employer, I was asked often by management what I planned to do once I’d retired.

First of all, I didn’t have an enormous amount of respect for most of my management there…there were some exceptions…so I didn’t really care to discuss how my personal life would play out in the upcoming months.  But I also didn’t want to lie.

So I told most of them (even the ones for whom I did have respect and admiration) that my one goal in retirement was to not die in the first year.  Because if I had spent all these years working hard and saving toward retirement, I would have been really pissed if I didn’t get at least a full year of retirement.

Just some other updates…originally I had anticipated doing the following once I retired:

I have added more sleep to my schedule.  I probably average about 7.5 to 8 hours of sleep whereas it was probably at about 6.5 to 7 hours previously.
I did not expand my workout time at the gym…in fact I realized that the cost of the gym wasn\’t worth it any more for me, since mostly I only used the treadmill for running/jogging/walking and I cancelled my membership.
I also ended up not adding yoga to my schedule, since that would have been done as part of my gym membership.  I may still start practicing yoga…I’ve been doing quite a bit of Breema instead.
I have definitely taken full advantage of my deck and espresso machine.  My latte art has improved slightly and I’m fine-tuning the grind to get the perfect flavor out of my espresso beans.
Walking and biking have replaced my gym membership, so these activities have definitely increased.  Thaddeus has been surprisingly excited with bicycling a lot this past Spring/Summer and the weather has been ideal for it.  We don\’t cycle fast, and we don’t cycle that far, but we cycle a lot and most importantly, my weight has remained about the same over the last year.
Two other benefits I’ve found about retirement that I wasn’t expecting.

Having been very excited about how the first one came out, I’ve decided to make a second HowlCat (cowl/hat) in a different colorway. 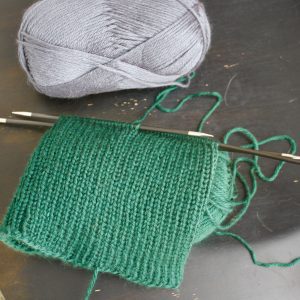 I’m somewhat grateful that the 1×1 rib part comes first in this pattern design, because it is my least favorite stitch to knit.  It also appears I may have to make at least one more of these for my youngest sister who wants one in “black and any other color.”  I doubt she’d like the other color to be orange unless she’s planning on hunting or going trick or treating whilst wearing it.

My favorite design in the Blog Contest listing of patterns from Modern Tapestry Crochet was the Provisions Tote Bag. 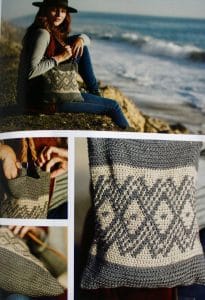 Two people guessed correctly IdigoB and Penny (others had it as their second choice as well).  IndigoB asked for the book to go to someone else, so Penny has been notified that she won the book.

Thanks to all who entered…we’ll be having another book give-away shortly.