Is it me, or is there very little historical perspective in political arguments any more?

In photography and other image-based art, there is a great concept called “depth of field”.

The depth of the field in photography describes the distance between the nearest and the furthest objects that are in focus in a photograph.

Similarly, today’s political issues in the U.S. seem to lack any historical or background clarity.

Our news broadcasts use the aural equivalent of a narrow depth of field when they insist on only broadcasting sound-bytes of an issue.  They demand the listener to focus on just the issue at hand.

There are a few exceptions.  International news can often be better at this.  PBS seems to provide a broader background than other domestic news.  And individual sections of shows will sometimes delve deeply into the background.  The Rachel Maddow Show on MSNBC often uses the first extended segment of the show to focus on historical background of a story before even introducing the story.

Suffice it to say that “those who forget history are doomed to repeat it” is something that is proving more and more true every day lately.

I rushed like a mad man to finish the latest Color Block Scarf. 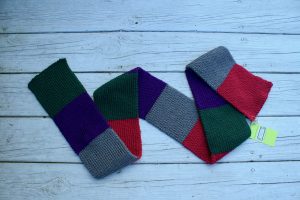 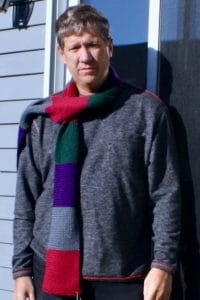 It’s finally starting to get cold enough outside where the idea of wearing a scarf won’t soon be out of the question. 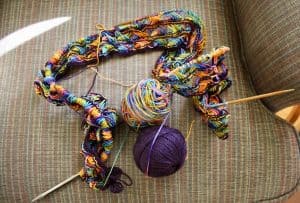 This one is using a high-contrast combination of yarns that I’m liking quite a bit.  While these high-contrast, bright scarves don’t always sell quickly at the Artisan/Craft Shows I sell at, they often attract people to the table to take a closer look at what I’ve got for sale.