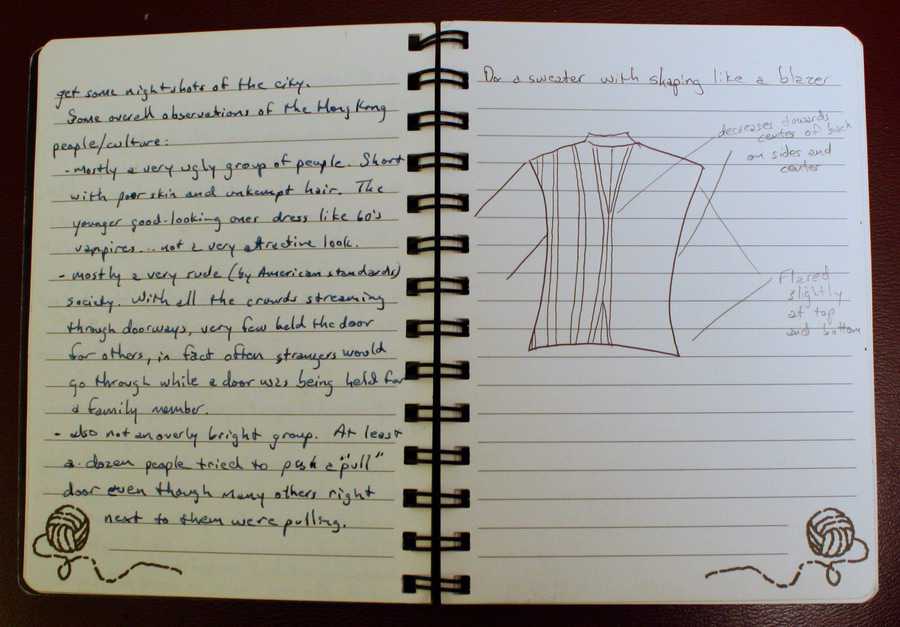 While it’s nice to go back and review thoughts I had as a younger, more ignorant man, I want to be clear that as my understanding of humankind grew, so did my empathy for “others” in this world.

I apologize for what may be seen as “shithole-like” comments…I am less ignorant today than I was almost 20 years ago.

18-Feb, 1998
Hong Kong as a city continues to enthrall me, although, my overall experience is being down-graded daily.  Work has been continuing at a frenetic pace and provides daily challenges as Grace dreams up new and exciting ways to torture us.  The weather also hasn’t helped….it’s been uncharacteristically dismal and gray and some rain as well.  Overall, we’ve been lucky enough to dodge most of the rain.
I’m also starting to realize that consulting in “foreign” lands is not very dissimilar to consulting domestically.  Aside from the language difference and some minor cultural differences, I find myself quite at ease with the work.  Don’t get me wrong…this client is more demanding than most and I have to adapt more to her style, but all my engagements to-date have had their unique challenges and I’m happy to say, that this one portends to be a success from our perspective.
I’ve completed most of my logistical situations (e.g., KMan access, picking up my tux), but I am still worrying about issues like my expense account and all of the money I’ve charged for personal things (also, getting through customs with my purchases).
Food here has been pretty amazing.  All kinds of wonderful and interesting foods.  I’m amazed at the variety of Chinese foods alone.  Each restaurant has a different style and quality making it fun to experiment.  Surprisingly, we were told that the ritziest hotel in the city (here) recommended a “locals” restaurant for dim sum that was the equivalent of Denny’s.  Our client couldn’t believe it, although I think that’s an unfair comparison, because the food truly was exceptional.  I think she was speaking more about the type of local who goes there.  But I don’t care.  Cindy and I actually went back there for dinner last night and it was very good.
I’m very much looking forward to the weekend to do a little more exploring.  Unfortunately the work pace doesn’t allow for much going around the city.  Although we have gone over the international section of the city a couple of times for dinner.  It’s very close (only about 5 blocks away), but I don’t think it offers all that much.

Lan Quai Fong is an international district here in Hong Kong where a lot of the European and North American population go to drink after work.  During lunchtime, I’ve never been in such a crowded environment before.  The streets are completely packed with people going to lunch or shopping.  Yesterday we did both and then Cindy & I went back for a very nice dinner.  During our shopping, Grace gave us some interesting lessons in international trade…like how knock-offs made in HK were 1/4th the price of the real item.  An example we saw was a lighter I bought from HK$35 that was HK$165 for the exact same thing except made in Japan.
I’ve been somewhat disappointed that I’ve found no place to buy Thad’s knife nor have I found a place that sells yarn.  It would have been interesting to see what brands they sold and comparative prices.
Last night for dinner we had one of my favorite desserts so far.  It was fruit and coconut milk soup w/white wood ears.  They also served little coconut marshmallow bunnies.  It was fun and taste good.
Today’s work was difficult and demanding (both mentally and emotionally).  It’s nice to get back to the hotel and know I have the weekend to relax and enjoy myself.
It’s raining out again this evening and I have no dinner plans, nor dinner companions.  I’m only praying that the rain is clearing away this weather for a sunny weekend.  I am growing suicidal with all of these gray days.

Got up this Saturday morning and tried to work out, but my lower back/hip was still bothering me.  Used the steam room and Jacuzzi but it didn’t help much.
Walked over to the Peak Tram and took a ride up there.  Kind of hazy, so while it was beautiful, the pictures weren’t so good.
Decided after that to go over to the restaurant the Cindy & I had dinner at for some dim sum.  Realized that single people in Chinese restaurants who can’t speak Cantonese are REALLY foreigners.  So I cam back to the haven of the hotel and nurse my ego and my hip in the Jacuzzi and steam room.  I then took a nap and debated going out to a gay club in town, but decided against it since my hip still hurt quite a bit.  Mostly I just hung around my hotel room, watched television and considered my dinner options.  So dismal I decided to forgo dinner (I justified it by saying I can’t run tomorrow anyway).

I can’t say how nice it was to order a burger in the café downstairs in the hotel and not have to endure the stress of being understood by someone with limited English-speaking capabilities.
Today was a very relaxing day.  I slept until after 8:00 and had a nice relaxing mineral salt bath while I read the Sunday times.  It was a local paper so it was pretty dull.  I then had that stress-free burger and sat at the window watching all of the thousands of Phillipina maids streaming by.
I then had a pretty good massage (acupressure) and spent some rehab time in the Jacuzzi.
Spent the remainder of the afternoon/evening going to Kowloon for some picture taking.  Again, we had lousy weather so pictures suck, but I did get a chance to do a lot of people watching while I waited in a mall for the sun to go down so I could get some night shots of the city.
Some overall observations of the Hong Kong people/culture:

–       Mostly a very ugly group of people.  Short with poor skin and unkempt hair.  The younger good-looking ones dress like 60’s vampires…not a very attractive look.
–       Mostly a very rude (by American standards) society.  With all the crowds streaming through doorways, very few hold the door for others, in fact often strangers would go through while a door was being held for a family member.

Also not an overly bright group.  At least a dozen people tried to push a “pull” door even though many others right next to them were pulling. 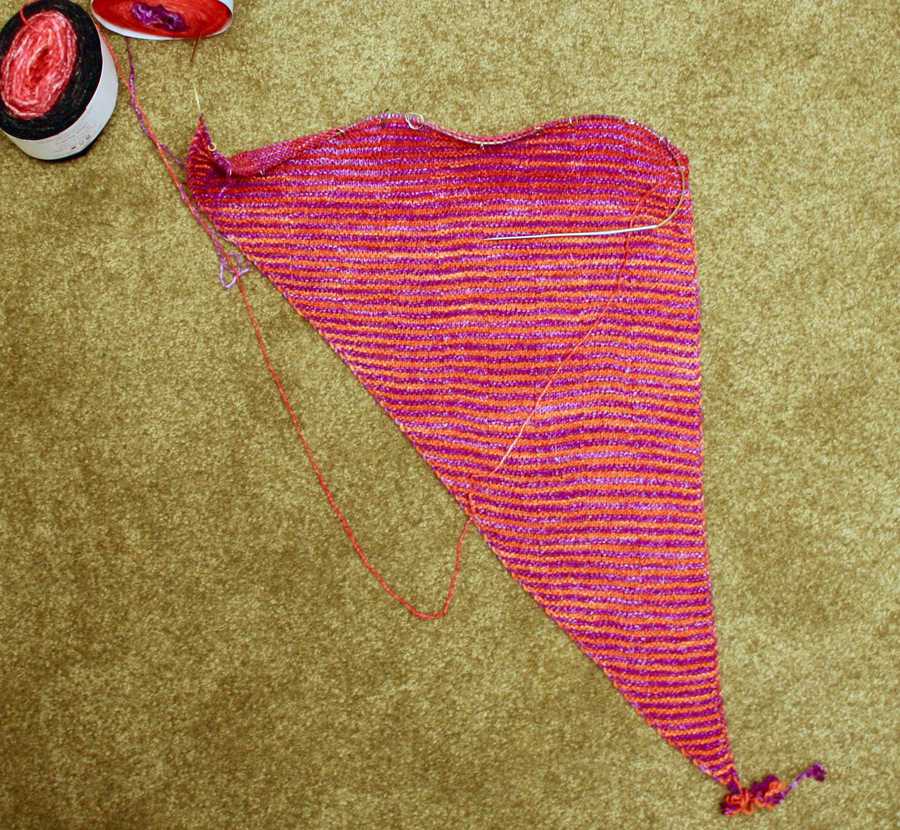 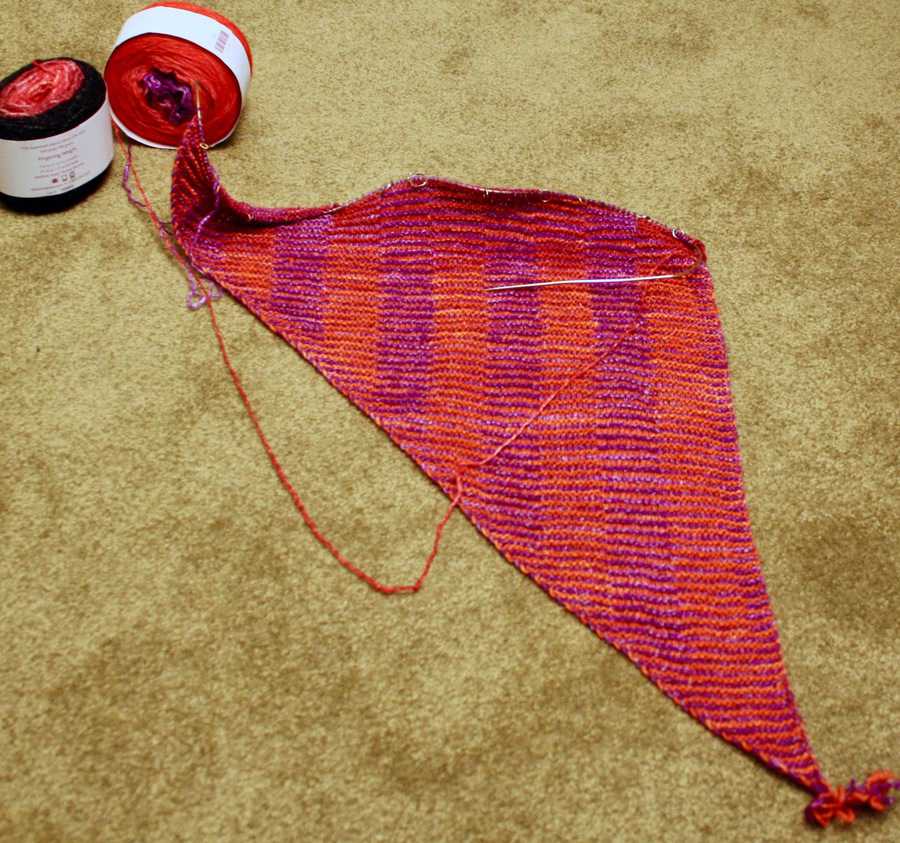 I’ve finally gotten both the primary and the secondary rhythms of this project, but it will end up being a LOT of tiny stitches to make a rather large shawl.

Regarding the first installment of the Travel Log, GUNTer asks, “was the tuxedo well made? do you still have it? did you get use from it?”

The tuxedo was extremely well-made, but I had the feeling they may have used a less expensive fabric than the one I had picked out…but it didn’t matter, I liked the fabric they used anyway.  I think I wore the tux a total of two times (max) and I’m honestly not sure if I still have it…I’ll check and give an update.  Even if I do, it wouldn’t fit any longer.