This last weekend I visited Kripalu Center for Yoga & Health for the first time.  It was clear I am not a natural part of that community of people.

An English teacher in High School got tired of hearing us say why we thought The Scarlet Letter was crap and told us that critiquing anything was easy, but finding what was awesome sometimes took some effort.

So, while I critiqued and judged the general population at Kripalu, it was more that I realized that I just didn’t enjoy hanging out with this crowd.

Yes, I abhorred sitting in the beautiful lobby overlooking the Berkshire Mountains listening to flip-flop-clad women rushing to their next yoga session to make sure they got their preferred spot in class.  Aggressive pursuit of serenity just seemed so odd to me.  The whole atmosphere of the place felt like a reality show called The Real Moms of Atlanta…a bunch of contentious, self-absorbed people securing their place in the social status of Ayurvedic history.

I also felt that the scope of this venture was way too large to maintain a simple, serene environment.  Thousands of people and acres of parking for their cars just seems so contradictory to being able to work toward self knowledge and peace.  Putting into place rules about where you can’t use your cell phones and making the huge cafeteria a silent place during breakfasts…those efforts helped get it closer to the goal, but not close enough as far as I was concerned.

The effect on me was that I felt lonely, isolated and excluded.

It’s easy to recognize that it was all my state of mind and not anything about the other people there, and like Mr. Scanella said…”Critiquing is easy.”

I do have to say that I thought the food was incredibly mindful and well prepared for such a large population of people.  And I can’t say enough amazing things about the workshop I participated in.  The participants, the workshop leaders and the content were truly amazing.  I will continue to pursue Breema as a method of discovery and nurturing.  Hopefully just in different venues.

Whilst examining my belly button this past weekend, I did have some time while not doing yoga during my optional program times to get in some knitting on the Briar Rose Pullover. 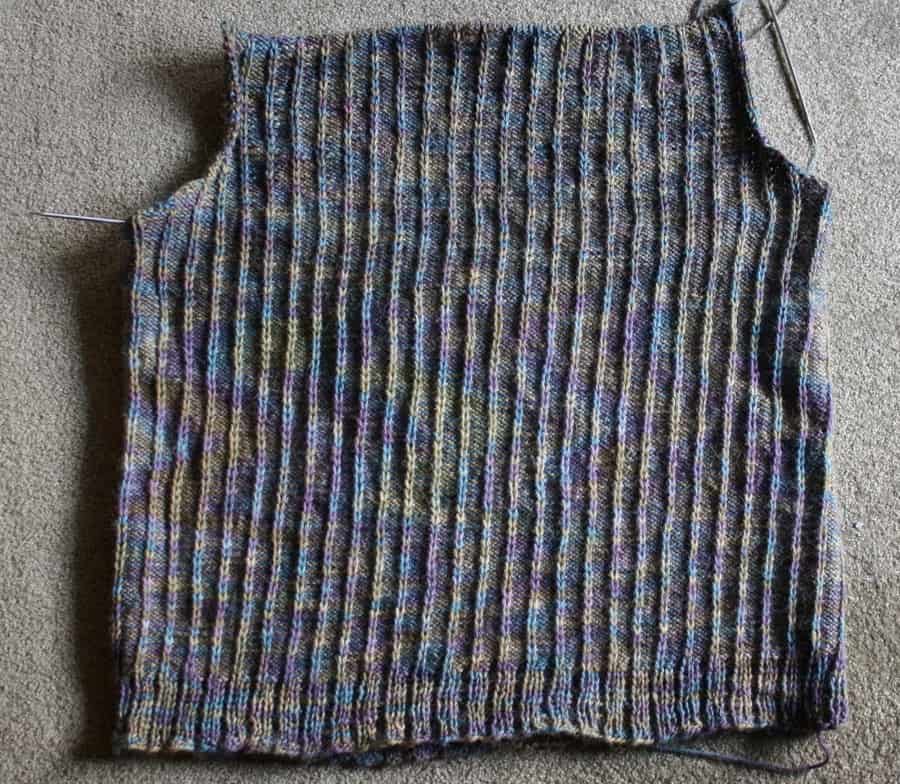 The back of the sweater is up to about 22 inches (it will end up being about 26 inches).  Here’s what it looks like from the front. 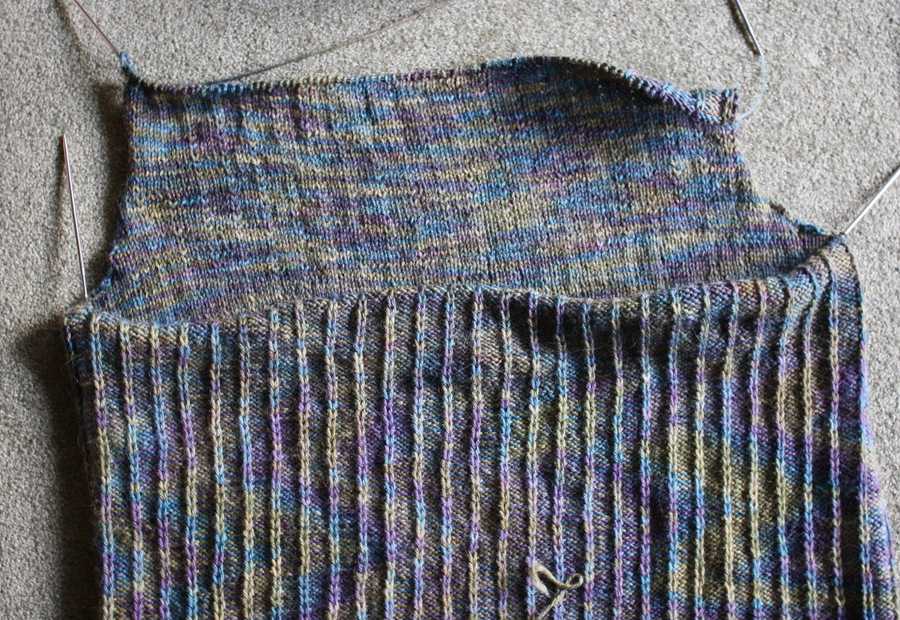 You can see how stockinette-like the reverse of the fabric is compared to the faux ribbing.

It’s also more obvious in looking at the photos that the variegation of the yarn has changed the granularity of the color pooling, but not enough so that I care to re-do the sleeve holes using steaks to avoid it.  Although I’d be open to hearing others’ opinions about that too.