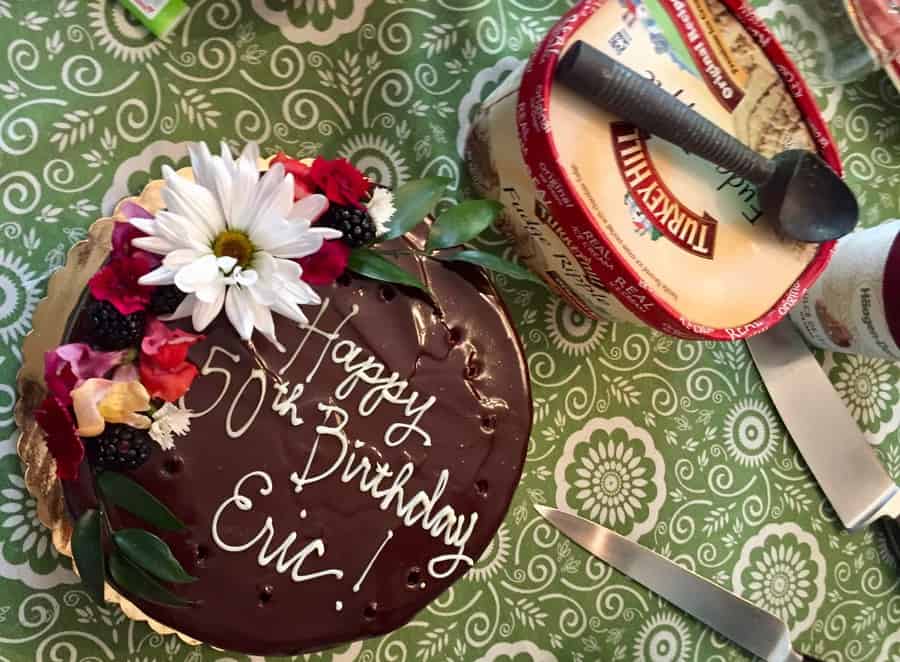 The last few weeks, I was working on a surprise birthday gift for Eric, a good friend of mine who just turned 50 this week.  He’s always been into Star Trek and he’s recently adopted a beautiful dog named Tucker.

Whenever I try thinking of a thoughtful gift for someone, it takes me days of pondering to come up with an idea…if I come up with something at all.

Lisa is incredibly imaginative and the idea was brilliant…I had two weeks to make a dog sweater for a dog I had never met…but as unimaginative as I am, I can execute someone else’s great idea brilliantly. 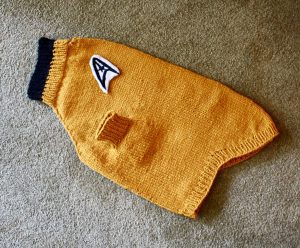 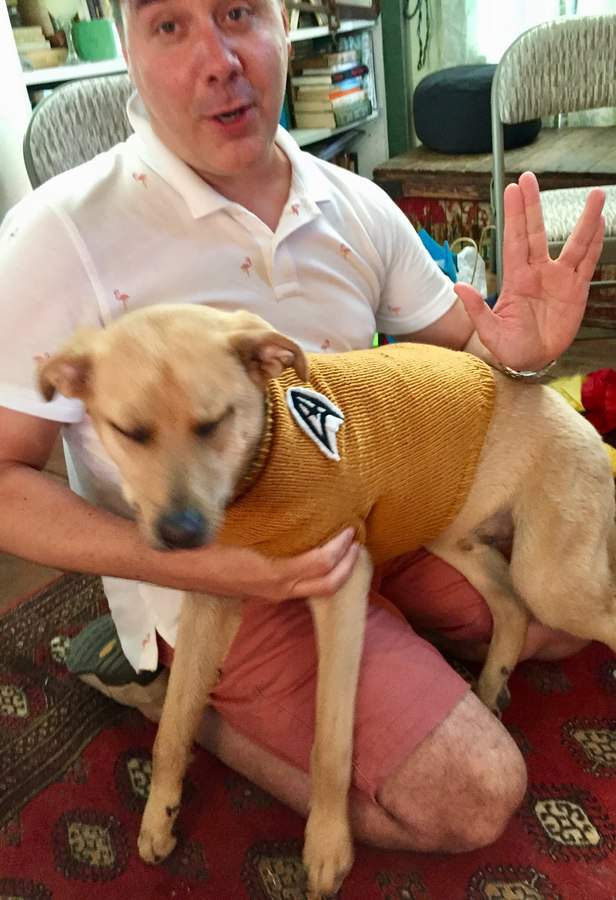 So…within two weeks, I had to knit a dog sweater, guessing the size from photos and create an embroidered emblem. 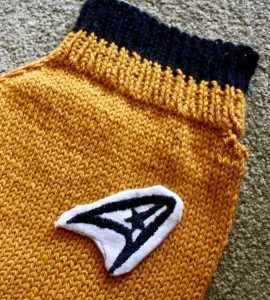 It turned out to be a great success, and a very fun project.  Tucker is young and energetic, so the photo of Eric and Tucker was difficult to get (Tucker wanted to be wearing a wool sweater in July about as much as I do).

In case anyone is interested, I modified a free Ravelry pattern called Candy Corn Dog Sweater by Jodi Lewanda.  I used the 27″ chest size, but made the length from the leg hole to the neck longer than it looked in the photo.  I used Patons worsted wool, so unfortunately, the garment will have to be hand washed.

I also used the following graphic to create the embroidered logo. 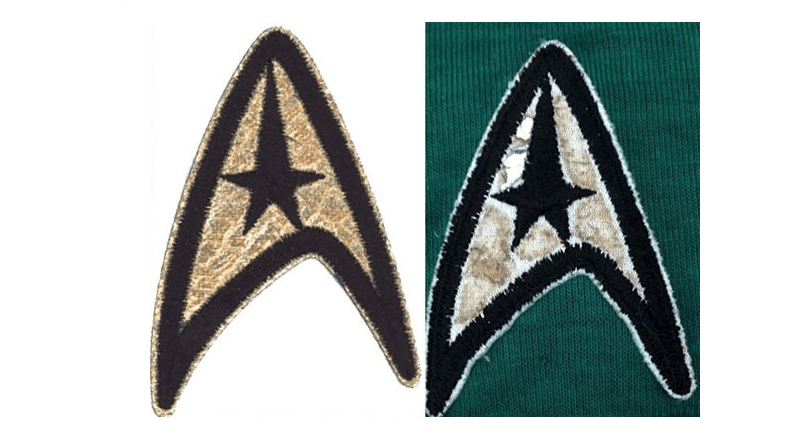 With the completion of the Finish The Dance Cowl, you’d think I’d go back to the Teddy Bear Baby blanket.  But no…I decided I needed to cast on for a new pair of slipper socks and also to cast on for another Knitted Cross Stitch Scarf. 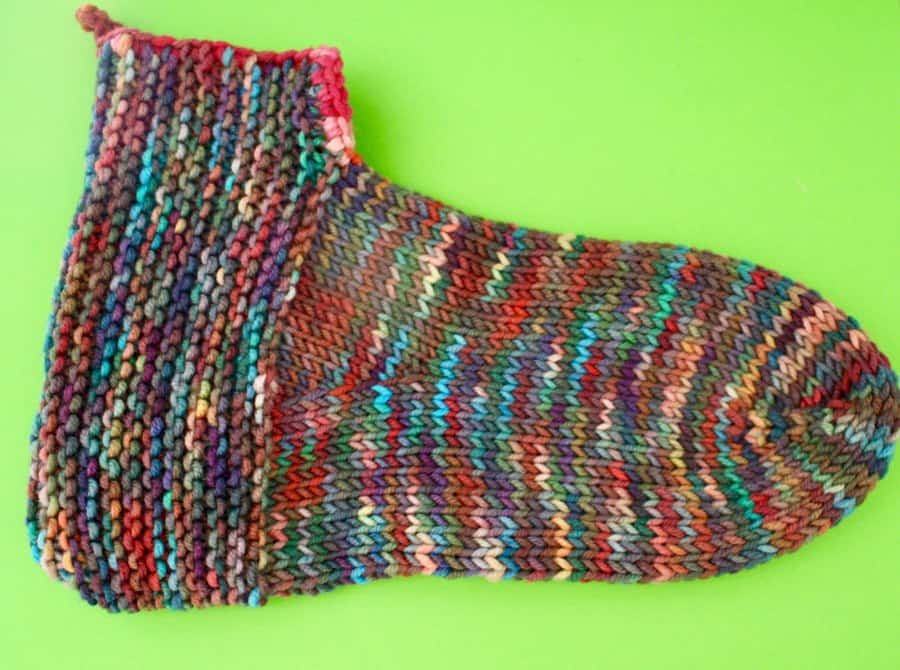 I’ve completed the first slipper sock of the second pair and I love how the colors work…I love it so much, I’m looking forward to making the second slipper sock, and that’s not usual for me! 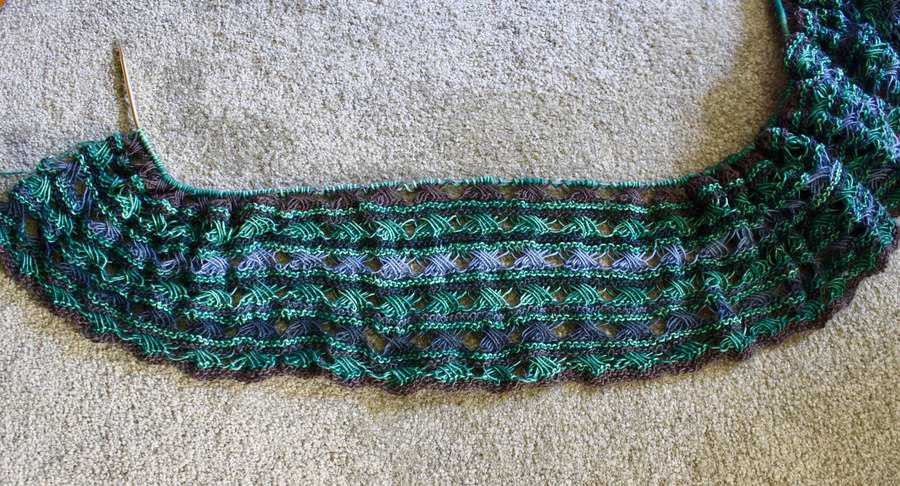 The Knitted Cross Stitch Scarf is almost finished already (I love how fast I can knit these up). 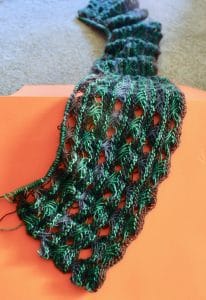 I’m using two yarns…a Zauberball sock yarn with blacks, browns and silvers and a Madeline Tosh single-ply yarn in emeralds.  I’m hopeful that after blocking, the camera will pick up how rich and saturated this scarf is with fantastic color.