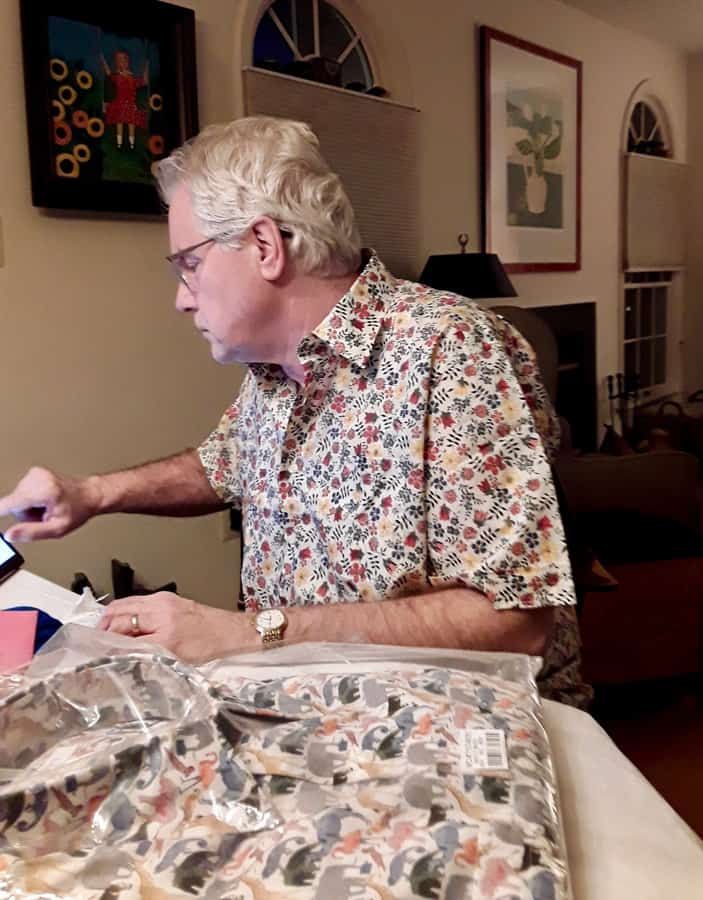 Thaddeus turned 65 yesterday.  He isn’t on social media.  And he doesn’t have a huge network of acquaintances or co-workers.

It was a special milestone birthday.  And, of course, it was Valentine’s Day.  The pressure was on!

Fortunately, we had recently given our friend Charles a fantastic shirt made with a Liberty of London patterned fabric.  Both Thaddeus and I were quite pleased with this gift.  It was fantastic!  So I decided to buy Thaddeus the shirt he’s wearing in the photo above.

Two days after I ordered this beauty, he notices the EXACT shirt on-line and considers ordering it for himself. FUCK!  Then he finds a used version of a very similar Liberty of London shirt on e-Bay.  It’s his size, so he buys it.  I’m a little disappointed, but figure he can now own two of these lovely/similar shirts.  Unfortunately, the situation got worse.  The e-Bay shirt arrives, and it’s too small.  So, clearly, I have purchased the wrong size shirt.  It had already arrived, and I had carefully secreted it into the house without Thaddeus noticing.  Now I would have to secret it out to return/exchange it for a larger size.

Then things got dire…the shirt we both LOVED wasn’t available in the larger size.

So, I decided to just buy a different shirt in his size that I liked almost as well as the first shirt (it’s the one in the foreground of the photo above).  This way, he’d have a choice in which shirt to keep.

The second shirt arrived a few days before his  birthday.  I was able to get it in the house and get it gift-wrapped beautifully without him noticing.

When he opened the shirt yesterday, he liked it, but he didn’t like the fabric pattern as well.  So I showed him the first shirt, telling him it was in the same size as the e-Bay shirt that didn’t fit him.

When he tried on the smaller, better fabric-pattern shirt, it fit him PERFECTLY (as you can see from the photo).

He felt loved and appreciated…as he should on his 65th birthday!  And Valentine’s Day!

Planning the steeks and the armhole and front band shaping took a LOT more planning than I’d expected. 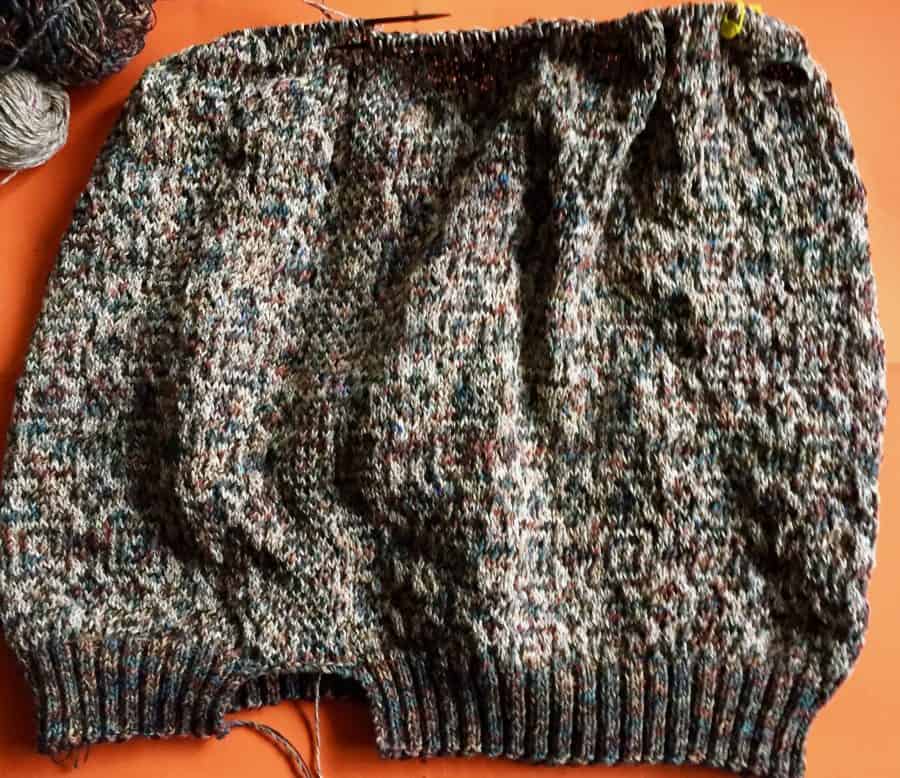 In addition to the center button-band steek, you can see the armhole steek started in the upper-right-hand corner of the photo.  The difficult part is keeping the color patterning correct with the decreases.  I can’t wait until all the decreases are completed so knitting won’t take quite so much concentration.

7 comments on “Feeling The Love”