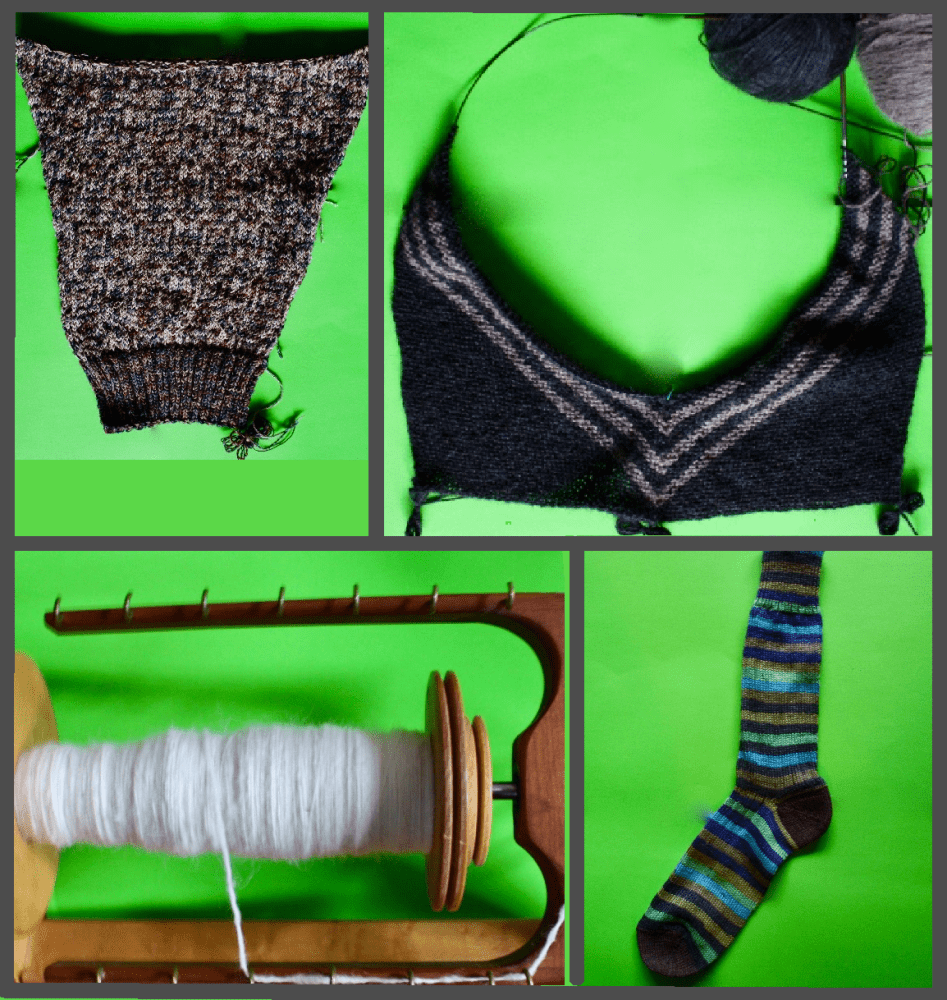 Having a project to work on when I’m in the living room and a second to work on when I’m watching television is something I like.  I also like having a complex and a simple knit project.  And I don’t want to leave my sock knitting machine and my spinning wheels to go unused for too long.

First of all, I hate knitting forum acronyms like WIP (work in progress).  Most of them were stolen by the KnitList from the QuiltList years ago (or some other crafting list).  Second, they’re too exclusive.  Unless you’re ITK (in the know), you’re excluded from the club.  Finally, they’re ridiculous to pluralize or put in the present continuous tense.  Works in Progress…is it WIP’s?  Or W’sIP.  I go with WsIP.  It’s not possessive, so you don’t need an apostrophe.  Honestly, there should be no fucking plural for acronyms  It would be the same for one WIP as multiple WIP.  And just to be clear, I won’t be KAL’ing anytime soon.  KingAL?

Second, it’s dreadfully boring to have just one project to be working on for me.  I’ve mentioned it before, but I have ADHD when it comes to knitting projects.  I get bored with a complex stranded knitting project.  It requires too much ongoing attention sometimes.  Or it’s difficult to work whilst watching a sub-titled movie.  So I can move to the simpler garter-stitch project.

And there are only certain times I can sit and spin.  Or focus on my circular sock knitting machine.  But as a retired person, I can find time to dedicate to both of these too.

With the recent completion of the beer mug socks.  And then the subsequent finishing of the Black & Blue Garter Stole.  It was necessary to re-expand my works in progress.  So… 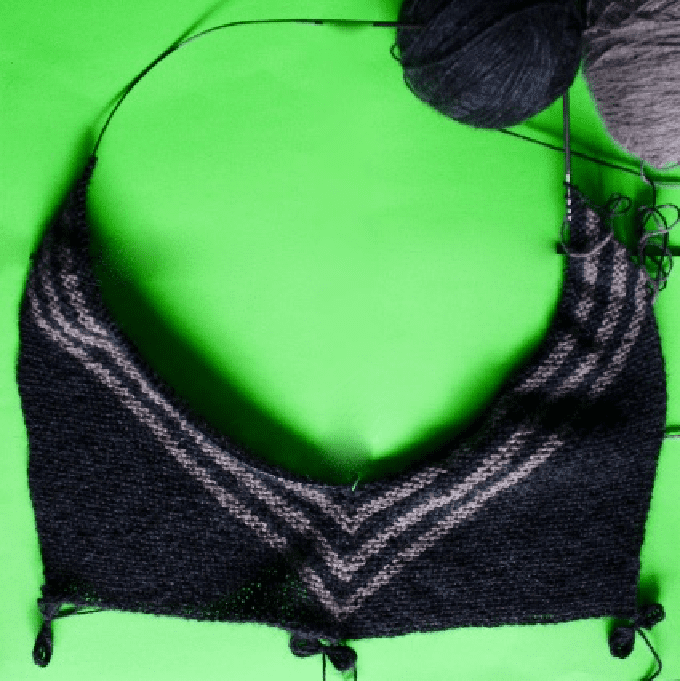 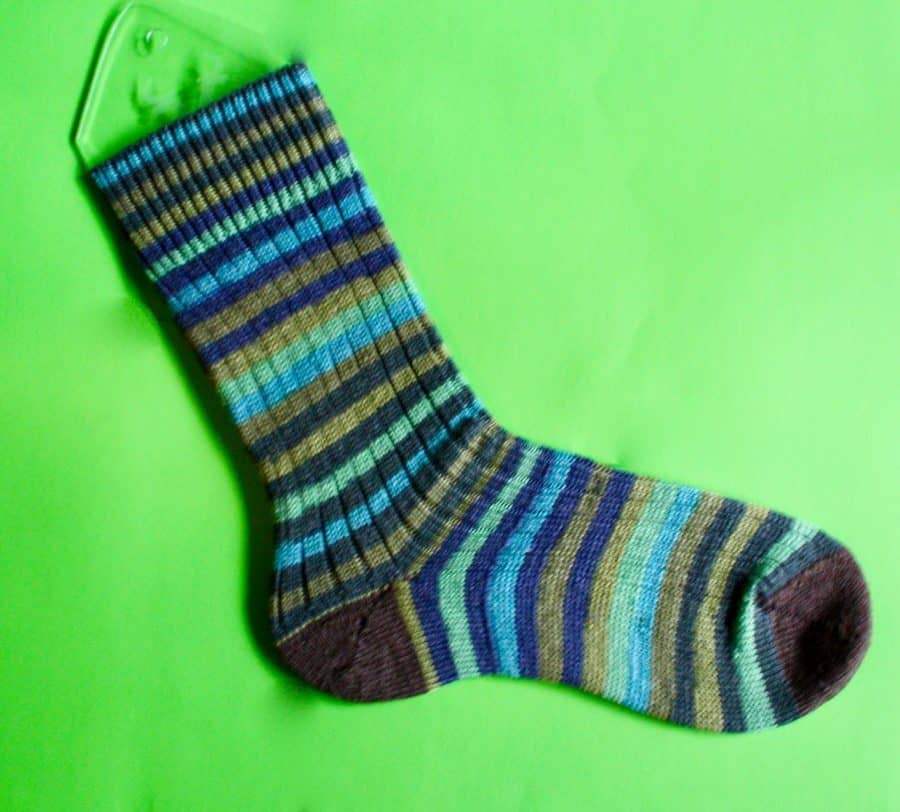 The simple project is another garter stitch stole knit in one big zig-zag.  It will have multiple stripes in two contrasting colors (similar to the stoles/scarves I knit back in 2016).

The sock came out spectacularly well.  I found some gorgeous sock yarn in my stash (Saki Bamboo by Wisdom Yarns) and decided to make a quick pair on the sock machine.  They are 1×1 rib at the top, moving into 3×1 rib which continues onto the top of the foot.  I also used a contrasting yarn for heel and toe.

And lest you think I stopped after the first one. 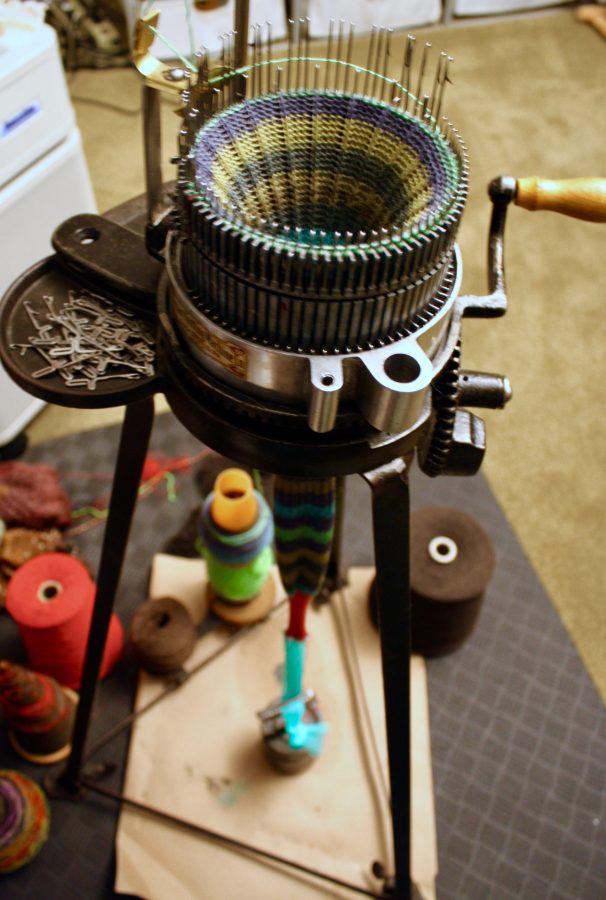 The second sock is already up to the heel turning (both ribbing sections of the leg are complete).

It’s not often I bang out a pair of socks in three days…hopefully I’ll model them for you on my next blog entry.