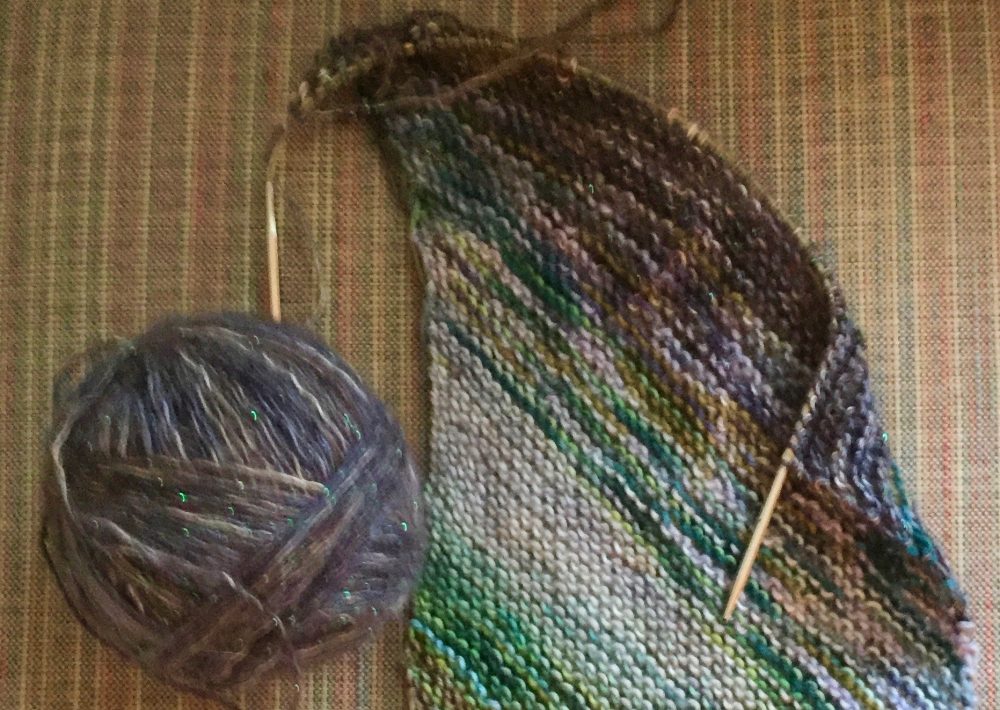 If you look closely at my latest Biased Scarf project, the newest yarn I’ve introduced is a sparkly yarn (with sparkly fiber spun in (known as Angelina for those who spin and want to add sparkle to your yarn).  The colors of the yarn are darker and rich, so a lot of guys have liked the colorway.

So, I have another confession that risks having my gay card revoked.  Or at least my “woke card.”  I don’t like the look of guys wearing nail polish.  I don’t like it on their toes or on their fingernails.  To me, it looks garish and silly.  I don’t even like a clear, shiny top coat.

Don’t get me wrong…I love getting pedicures.  I love having soft, callous-free heels and toes and I love looking well-groomed.  Especially during sandal season.  But when I see a guy in yoga or in a photo where he’s knitting and his nails are deep blue, I find it jarring and not at all appealing.

However, when it comes to sparkly in my knitwear, I think that’s completely appropriate. It’s hard to capture sparkles in a photo of knitwear, but you can see it a little in the closer photo above. 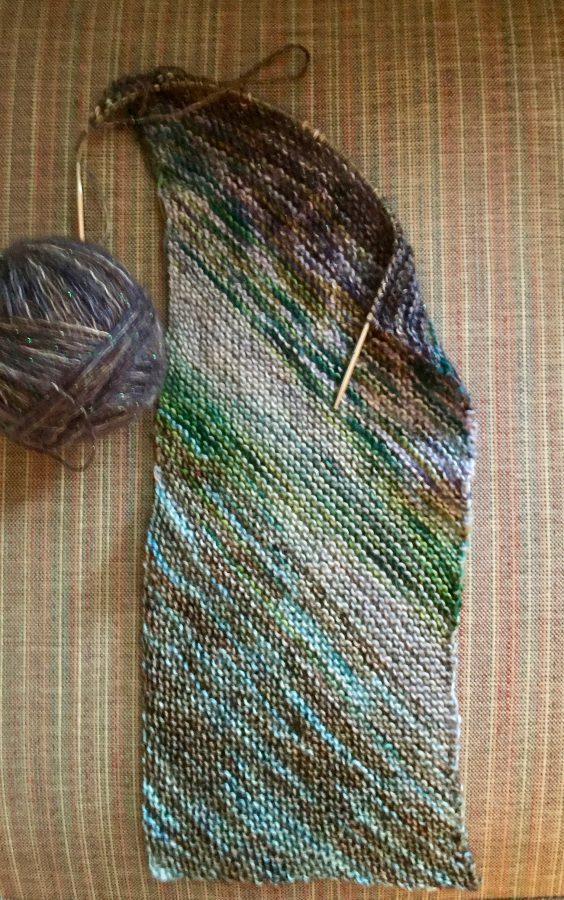 The latest Scrappy Biased Scarf project will be up for sale at my Craft Show table in November and December (if I get accepted).  So I’ll be interested if buyers will look at this scarf as a gift for a man.

Other than the minimal progress you see on the Scrappy Biased Scarf above, I have made slightly more progress on the See Grass Shawl. 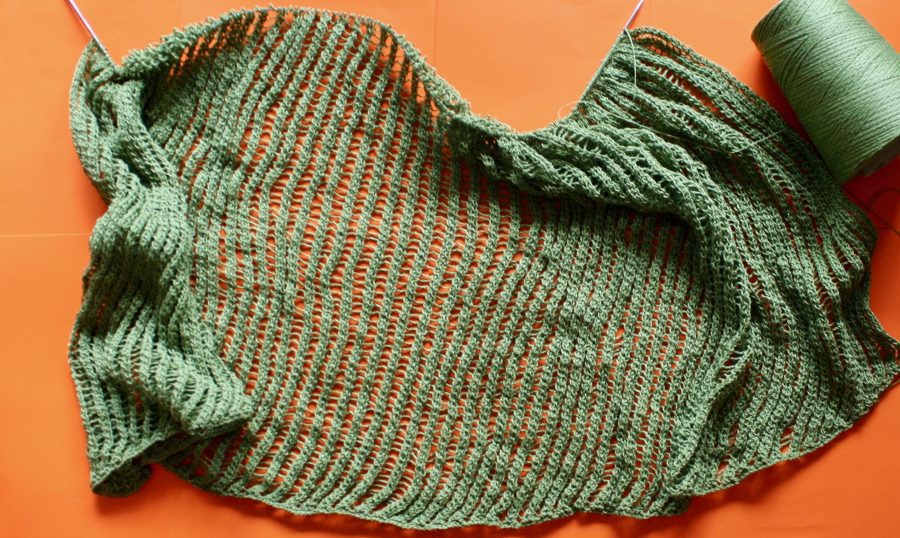 I know this looks like that last few progress photos, but… 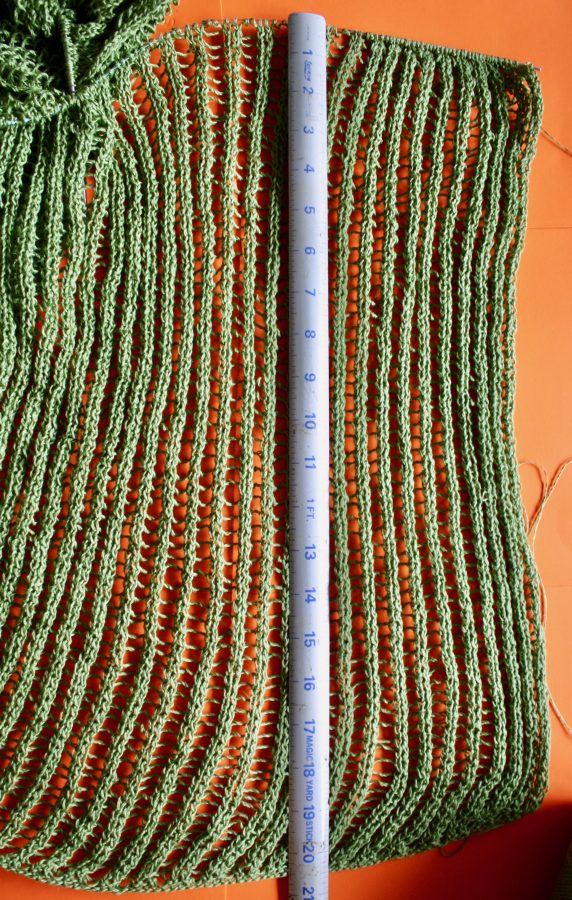 Some folks have asked me for both the pattern and the yarn for this project.  I posted the pattern back a few blog posts ago, but I’ll repost it here again:

I’ll probably write up the pattern for this shawl and post it to Ravelry for free…mostly because I know I’ll get a lot of people asking for it so they don’t have to do the math.

Here are the basics:

Note: On row 2, you’ll be working 2 sts into double yarn-over…the first one is a P st, the second one is a K st.  Most instructions will tell you to K into the back of the loop on the second one…I don’t do that and it gives a much flatter, twisted ladder in between the columns.

The yarn is a cone of silk and cashmere yarn I don’t even know when and where I bought it, but here is the information label. 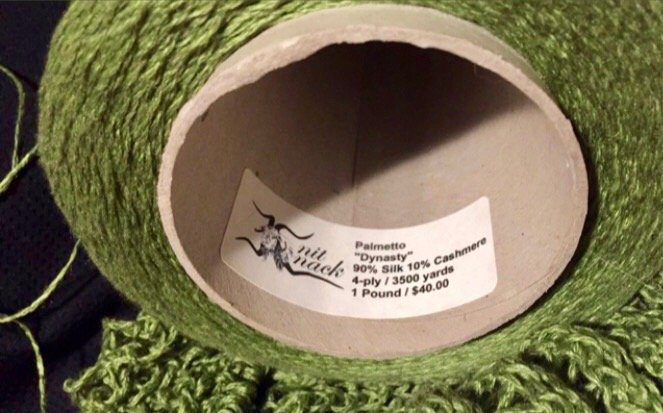 I must have ordered this on-line at one point, but I don’t see it listed on the website for Knit Knack.  Let me know if anyone contacts her and it’s available.