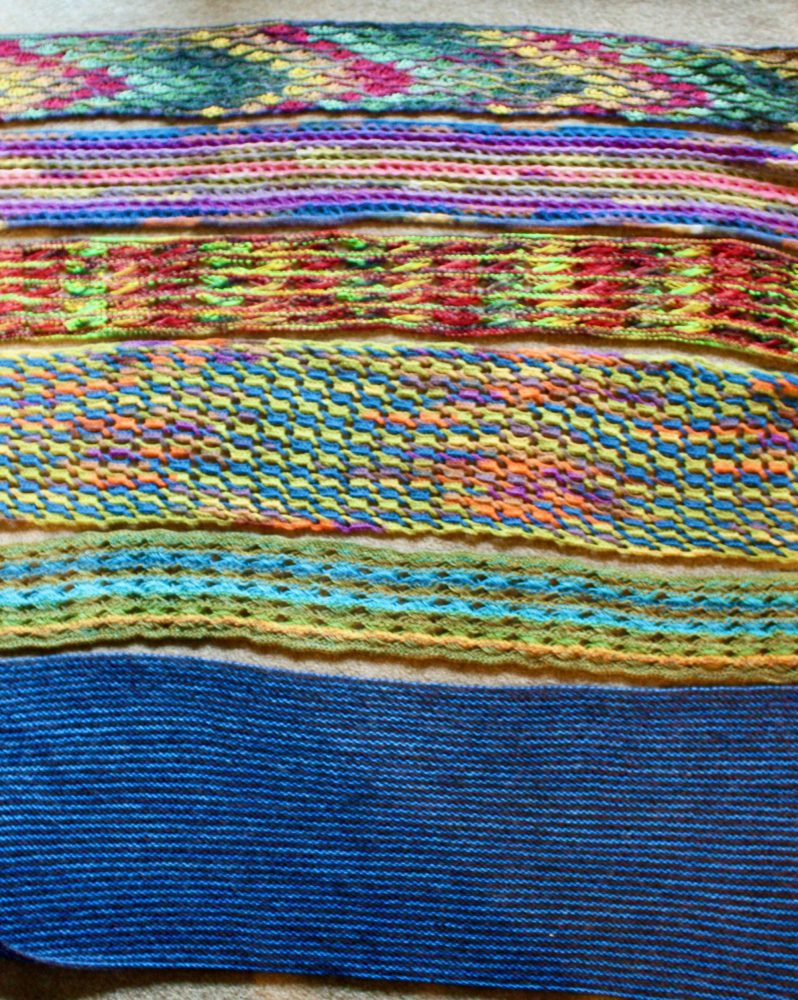 You may have noticed that a lot of my scarves and shawls use lengthwise knitting or crochet instead of widthwise knitting.  There are a few reasons I do this.  Many of you may already know these benefits, but I thought I’d discuss for those who may not.

Here are my main reasons why I prefer lengthwise knitting:

I know for some knitters it seems daunting to cast on 400 stitches.  It’s a lot of stitches to knit for each row as well.  And binding off 400 stitches can be painful…I get it. But the truth is, it’s all about the same amount of knitting whether you knit lengthwise or widthwise.  It’s also requires turning the work much less often. And turning the work less often means less tangling of multiple yarns. My projects seem to grow a lot faster when I knit them lengthwise, although I know that is just my imagination.

When I first started “designing” decades ago, I found I could take a simple stitch pattern and turn it on its side.  The effect was often really quite dramatic.  Old Shale, Indian Cross Stitch and even garter stripes took on a whole new look.  When I realized that blending variegated yarns in alternating colorways seemed to blend the two colorways better with less ugly pooling and striping, I was hooked. Do you have a stitch pattern you’ve used for scarves that was knit widthwise?  Turn it on its head and see if it looks different…better.  While the crochet garments done lengthwise don’t benefit from the other two benefits, I have found it aesthetically interesting to crochet lengthwise as well

About 20 years ago, I noticed a coworkers scarf that her mom had knit for her.  It was Lion Brand Homespun knit in garter stitch widthwise.  After less than a year of hanging this scarf around her neck and also hanging it around her coat, the scarf had stretched from about 5 feet to over 7.5 feet in length. Yes, part of that stretching was due to the yarn and part of it was probably due to the knitters loose gauge.  But most of the stretching was from the fact that garter rows stretch out much more widthwise than lengthwise.  In fact my garter striped scarves and shawls don’t stretch out of shape at all.  And most of them are knit using fingering weight yarn on US 5 (3.75 mm) needles (very loose gauge).  Knitting garter on-the-bias also takes away ugly stretching, but doesn’t have the other benefits of lengthwise knitting.

Any naysayers?  Any opposing arguments about this incredibly controversial opinion?

So glad to have finished the scarf and hat being donated for a New Years auction. 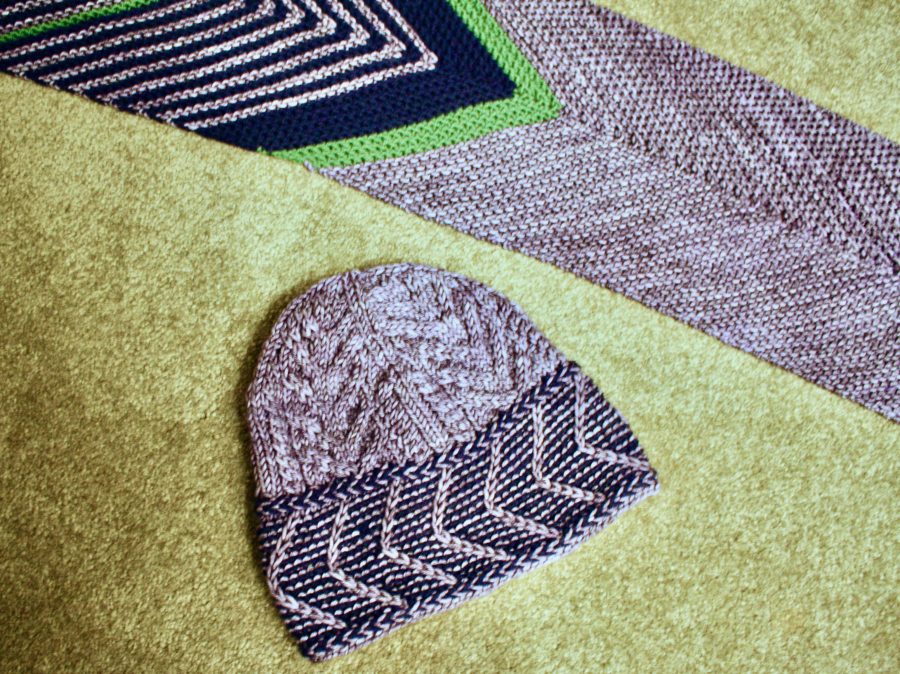 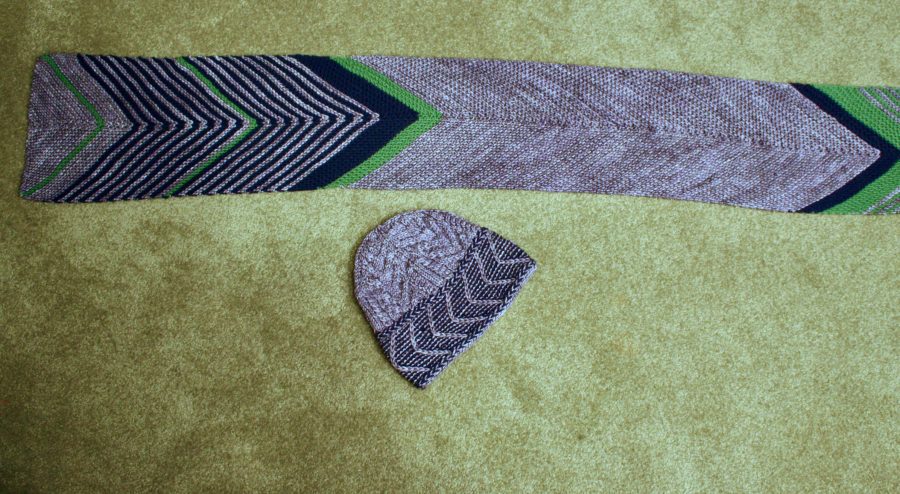 There is nothing about this project that I didn’t thoroughly enjoy.  The colors are perfect for Easton Mountain. The yarns are squishy and beautiful. And the pattern designs look fantastic and go together incredibly well.

I’ll say it again…you definitely want to try knitting Stephen West’s Westward Hat design.  It’s a fantastic and well-written design.  Plus it lets you work with three techniques that are fun and interesting (Latvian braid, traveling slip-stitch, and cables).

With the finishing of the scarf and hat project, I’ve picked up the Chantal Silk Old Shale Wrap again. 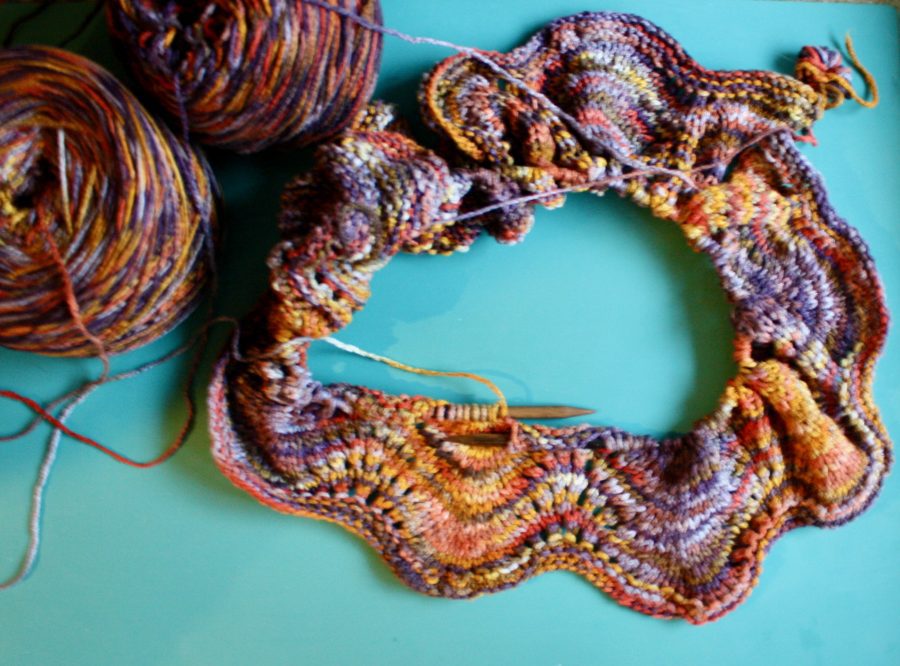 Not a lot of progress, but this is a pretty fast project, so I expect to finish it relatively soon.

3 comments on “Benefits of Lengthwise Knitting”