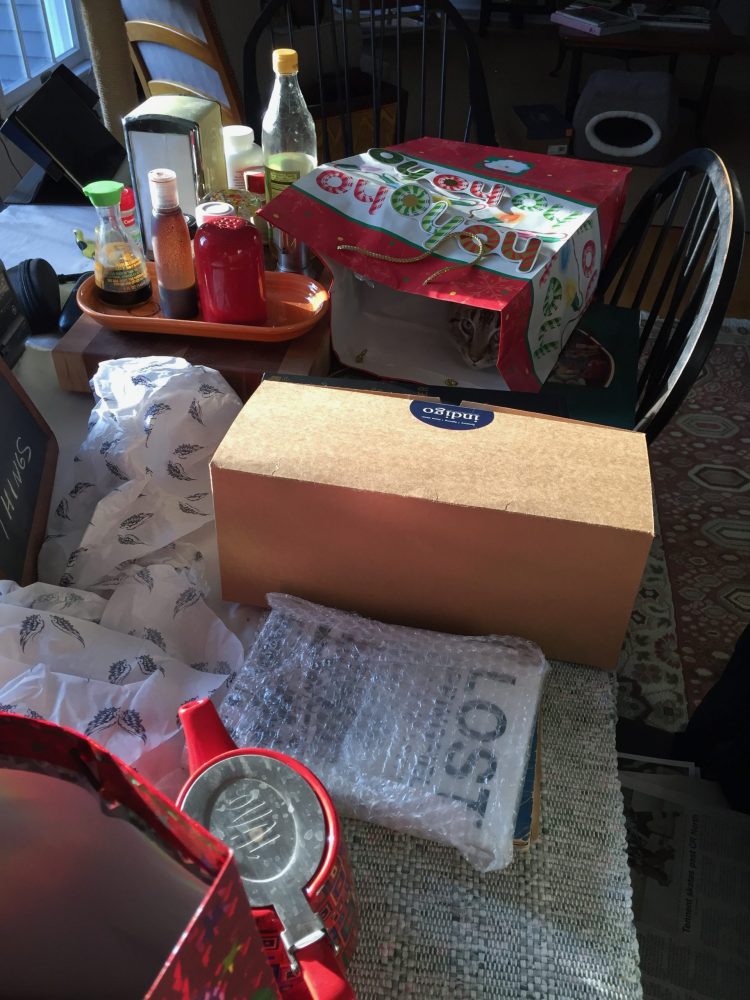 This year was definitly a pets and queer xmas. Pets participated quite a bit in the Xmas festivities. Xmas also included one of the most queer gifts I’ve ever received. And loved.

Can you see a pet in the Xmas wrapping mess above?

Yes, Finn decided to include himself in the fray.  He was sitting like that for about 10 minutes before I even realized he was there. Startled the shit out of me.

We also received a gift for Finn from my sister. 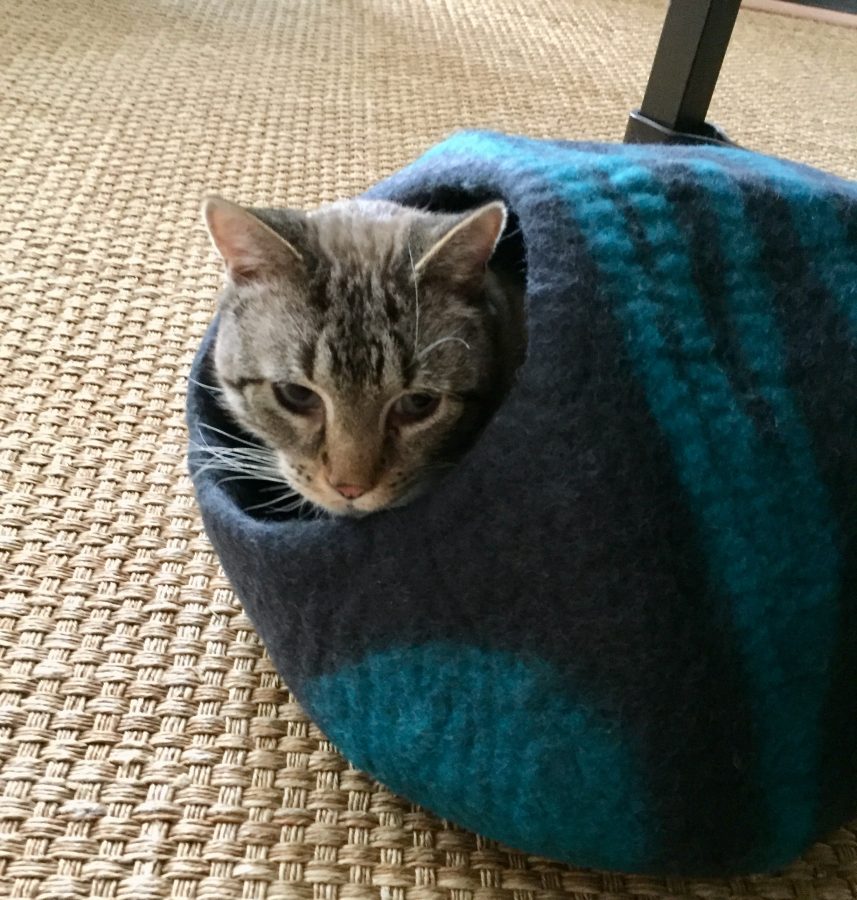 This is a felted wool cat cave (or in Japanese neco chigura – 稚座) Finn LOVES this little hideaway.  We may need to put it away if he continues to stop sleeping/snuggling with us at night when we’re in bed. But for now, it seems to make him feel safe and warm. 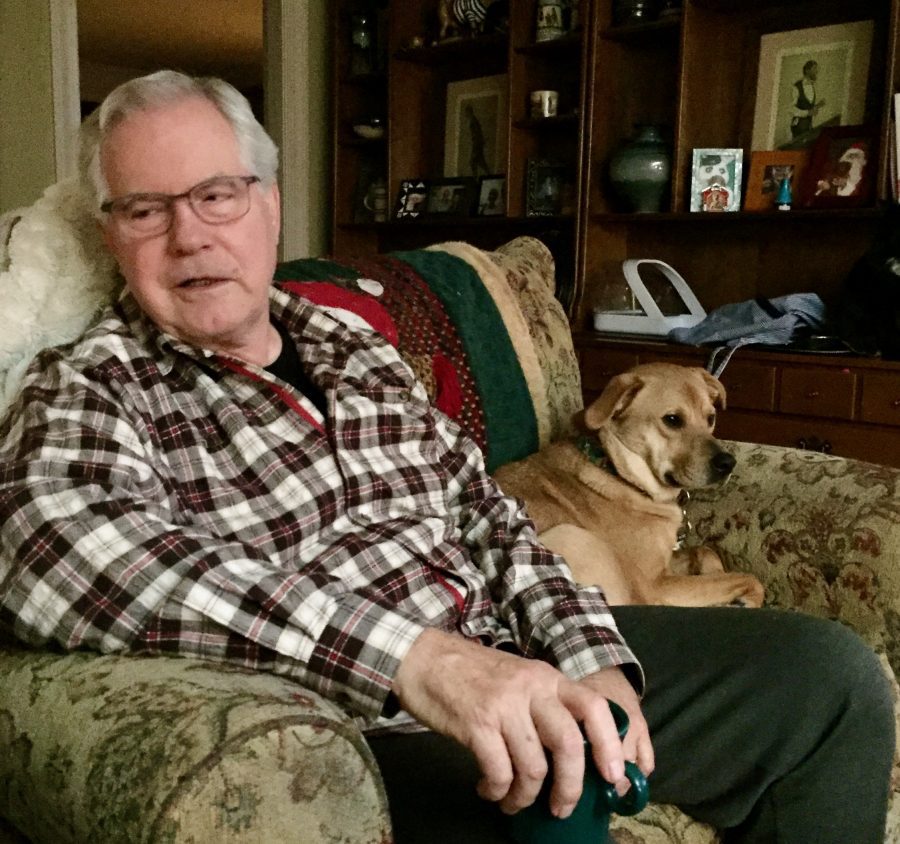 This beautiful dog is rather hyper.  Never sits next to his family in this chair. And Teddy frequently forgets who Thaddeus is and barks loudly when they’ve been apart for more than five minutes.  This is truly a Xmas miracle!

My sister gave me the most awesome new cups for lattes. 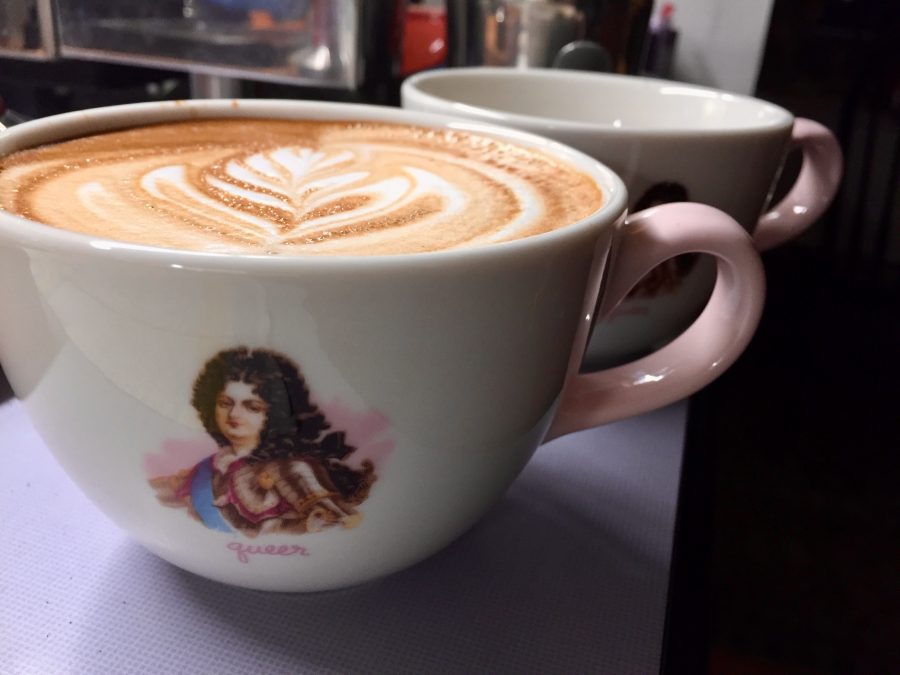 If you look closely, you’ll see the word “queer” underneath an image of Louis IV??? Not really sure who it is.  But they seem rather queer. And the handles are pink. 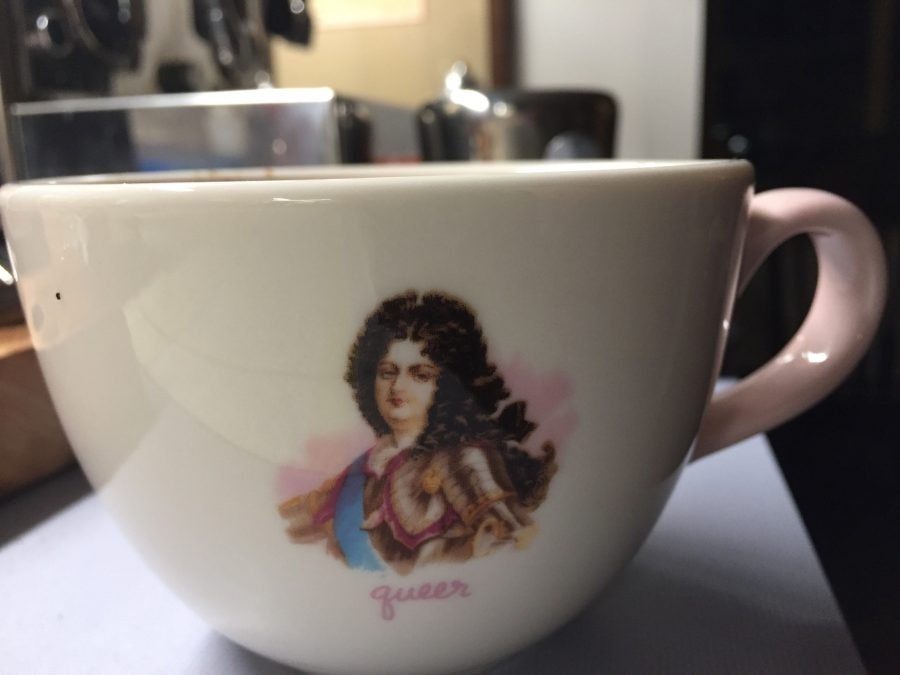 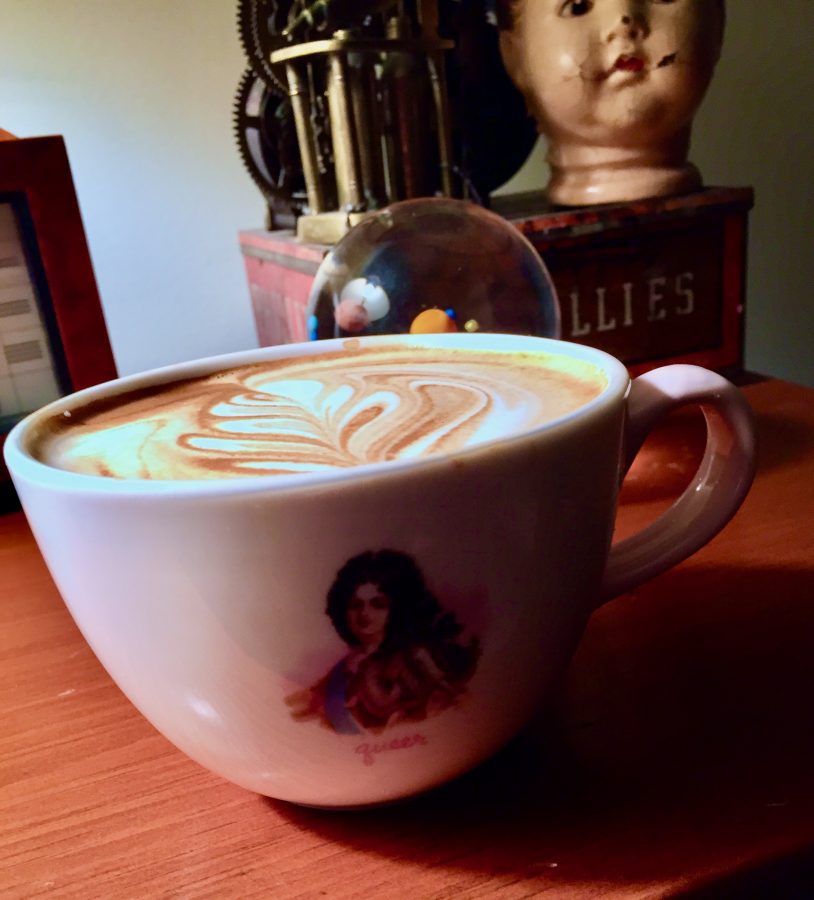 I’ve already used them twice for my morning lattes.

Despite the holidays, there’s a lot going on in my knitting world.  I have finally finished the Chantal Silk Old Shale Wrap. 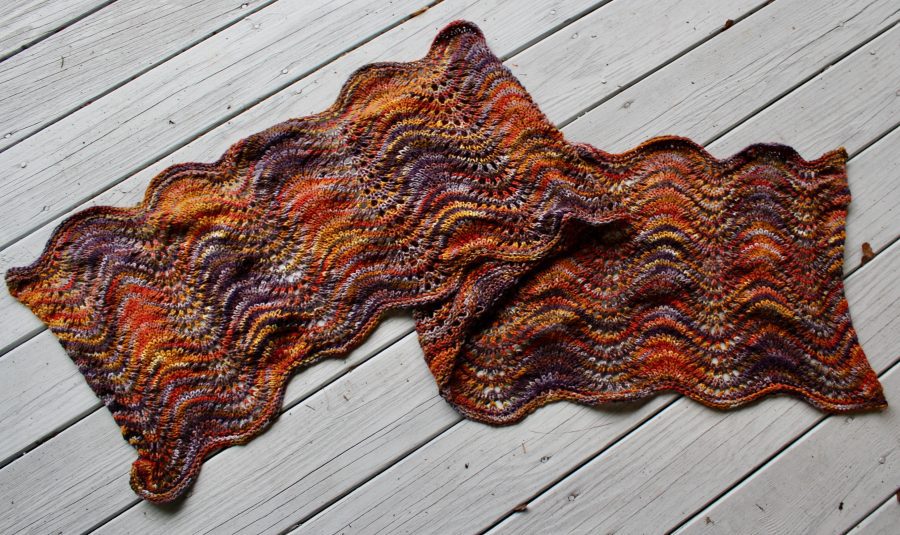 It’s as fantastic as the first one.  It’s warm, and light and the colors pool in ways that accentuate the yarn colorway.  I couldn’t be more pleased. Overall, it is about 18″ x 70″ inches.

So, it’s a generously sized wrap for most people.  I’m very happy with this garment.  AND…I have enough yarn for a third one.  Which I will start sometime soon.

In the interim, I have started two new WIPs. 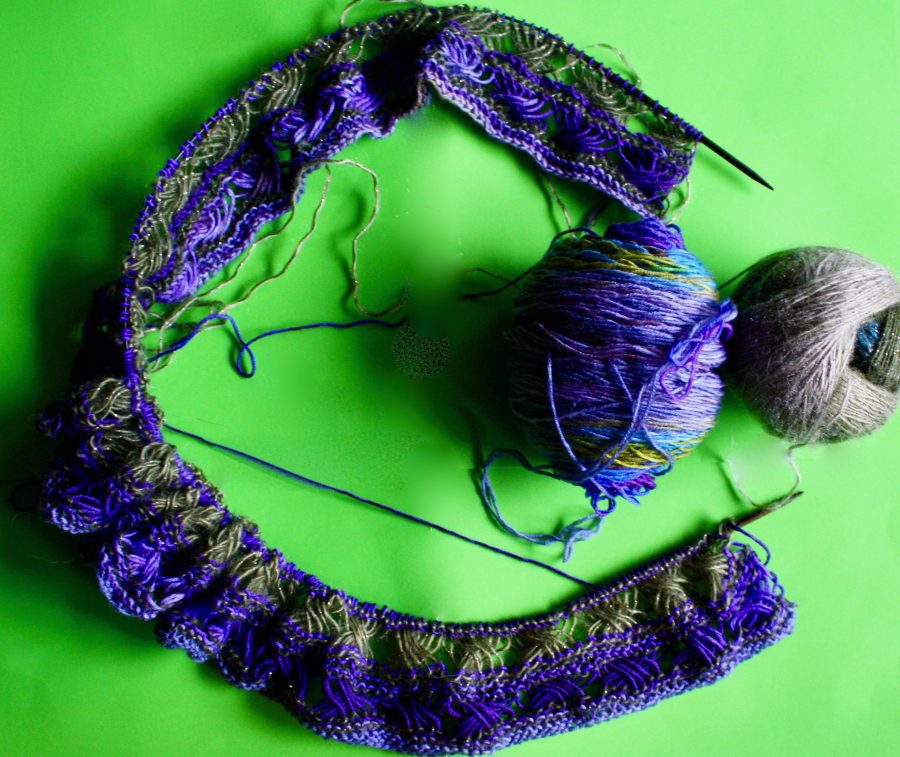 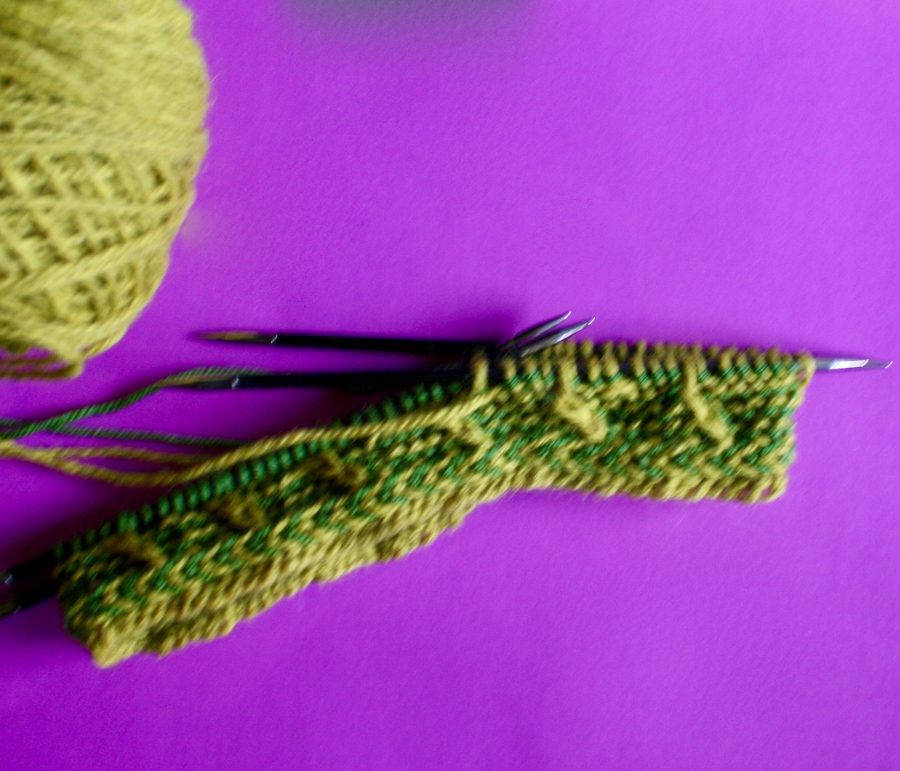 I am replacing the Knitted Cross Stitch Scarf with glittery yarn that I sold at one of my craft shows. Because of the colors, I call it my Indian Princess Scarf. The royal colors of purple and gold make it very rich looking and even garish to some people.

I’ve also started a new Westward Hat in a brighter colorway than the others.

Diane in Chico writes, “Love the hats and many of Stephen West’s patterns (and his modeling photos). He visited our LYS. He’s beautiful to look at, being a fit dancer, and he’s was charming as can be.”

I couldn’t agree more.  He’s a talented designer and he’s beautiful looking and he’s rather shy in person.

2 comments on “Pets and Queer Xmas”