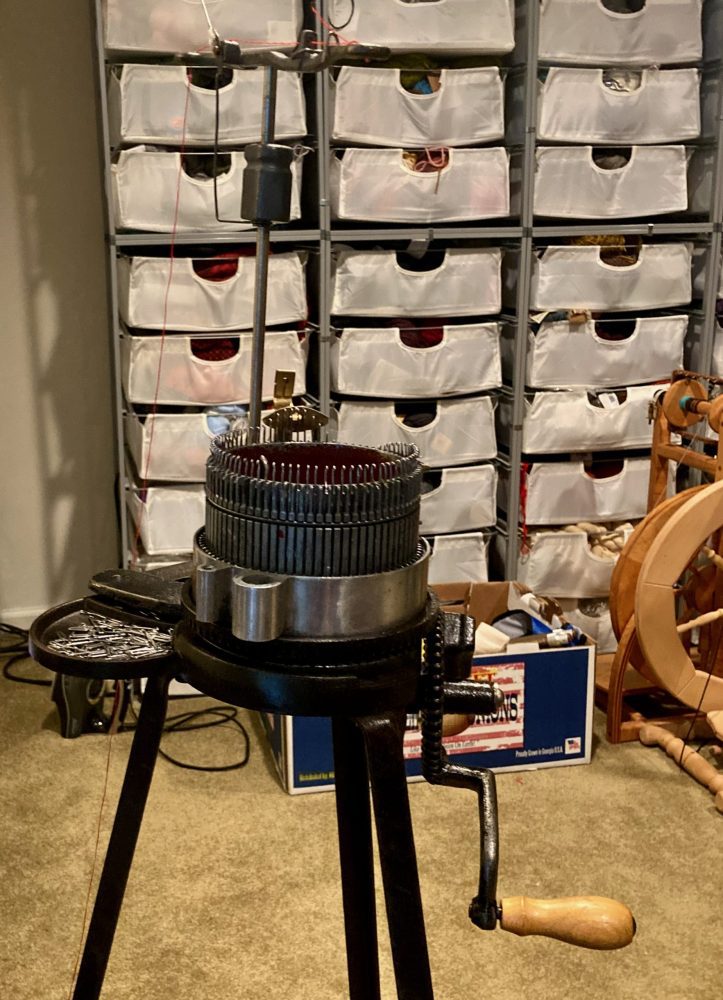 I definitely fit one stereotype of being gay. I’m not mechanically-inclined. Even when it comes to this mysterious machine.

Learning The Secrets of This Mysterious Machine

Thanks to the many people in the Circular Sock Machine (CSM) forums I have been able to successfully make socks on my antique ~1925 Gearhart machine. I can knit ribbing, turn a heel and a toe and crank out miles of knitted tube.

But in many ways, I’m still confounded by this amazing piece of machinery.

Blog readers don’t see all my failed attempts at making socks. Because who wants to publish their shameful lack of ability? Even though I have had a lot of success in learning how to crank socks, there are some periods where the machine just refuses to work.

Back in May, I was planning on bringing the old machine to the Men’s Spring Knitting Retreat. So I figured I better make sure it was in good working order. At least a dozen attempts later, the machine continued to deny me the ability to make anything resembling a sock. Tons of dropped stitches. Jamming during the short-rows of a heel (if I even got to the heel section). Ribber needles refusing to pick up yarn.

I’ve learned to be obstinate and force my will onto this amazing conglomeration of metal and wood. But I finally admitted defeat and left it sitting there. I ended up not getting to go to the retreat anyway.

Now a month later, I decided to take some time off from crocheting and sat down at the sock machine.

Two hours later, I did something for the first time ever.

To many, this might look odd. But with one single cast-on, I created two consecutive socks with NO mistakes. And to add to the complexity, I used contrasting color yarn for the heels and toes. The socks also have two types of ribbing (1×1 at the top and then 3×1 throughout the remainder).

I will never understand the serendipity of my machine. But I am thrilled to say that after grafting the toe, I have a wonderful pair of socks.

But I could sit down at that same machine right now and be denied again. My Gearhart is constantly telling me that I’m not the boss of her.

Despite taking off a few hours to knit socks, I still made some progress on the April Showers Shawl.

When it’s finished, the shawl will be over six feet wide, tip-to-tip. It will be lightweight and lacy.

AND…it’s getting faster and faster as I progress. Honestly, if I had waited to do these first 14 rows of crochet until the end, I don’t think I ever would have persevered.