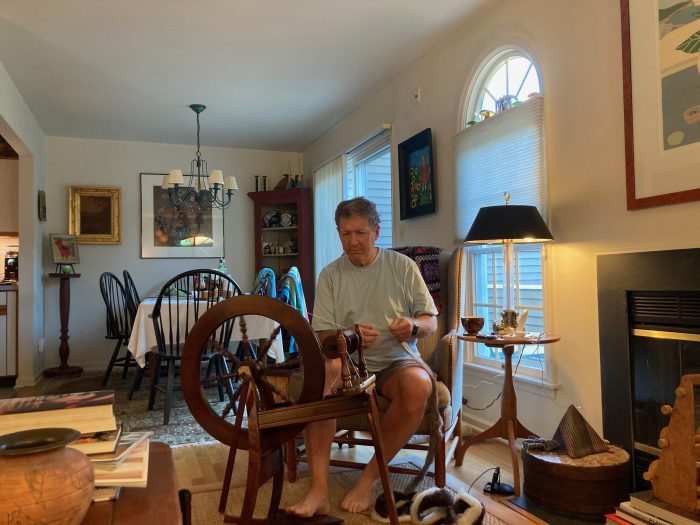 When I am offered a windfall that I don’t need, passing along the generosity seems the best option. Others’ excitement is very satisfying.

Excitement About Passing Along Generosity

Recently, a local friend was clearing room in her house. She used to be a sales rep for yarn and fiber companies. She had an Ashford Traditional spinning wheel that she was hoping to sell inexpensively to anyone I knew who might be interested. I picked up the wheel and made sure it was in good working order. It came with the lazy-Kate and bobbins. And it worked smoothly and easily.

It was complete and very rarely used. So, I offered it up to any of the guys going to the Men’s Fiber Retreat in a couple of weeks.

And, one eager beginner was interested. So, now this beautiful wheel will be heading to him.

I honestly loved spinning on this wheel. I considered buying it myself. It’s a different type of tensioning than my two other wheels which would allow me to spin different yarns. But, this thought was fleeting. I realized the joy of a new spinner owning this wheel was much greater than any satisfaction I would have in owning it. It was nice to be able to pass along some joy.

The garter-striped scarf is finished, bound off and all the ends are woven in.

The photos aren’t fully representative of what the scarf really looks like in-person. It’s darker and broodier (which I love). The scarf is also quite large. It’s 6″ wide and 77″ long. A perfect gift to sell at my craft shows in the upcoming months.