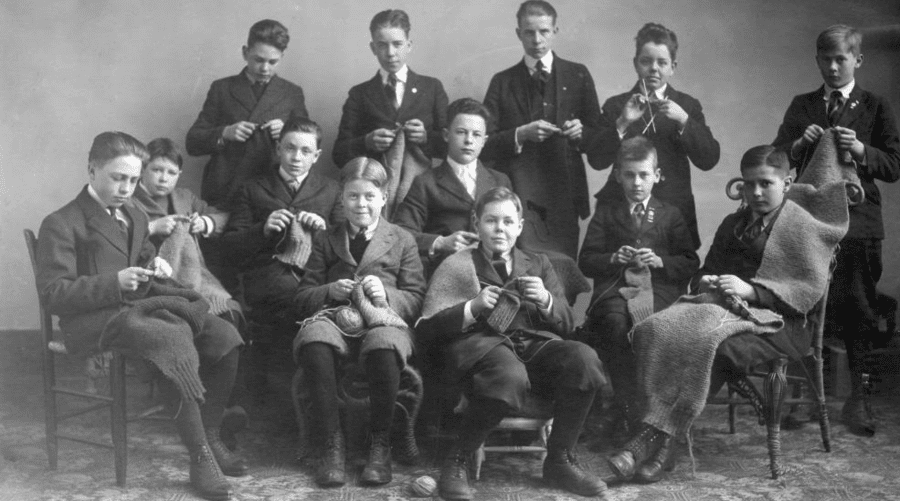 I don’t mean designing or knitting my own creations. I’d enjoy doing both those things.

I mean production knitting of the same garment over and over.

Such as scarves for a Craft Show.

So far this week, I’ve completed another scarf (VERY long), and started another Kureyon London Beanie. 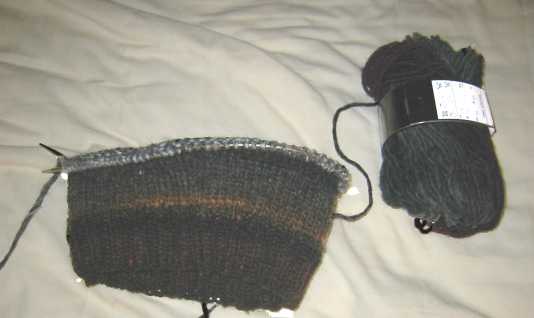 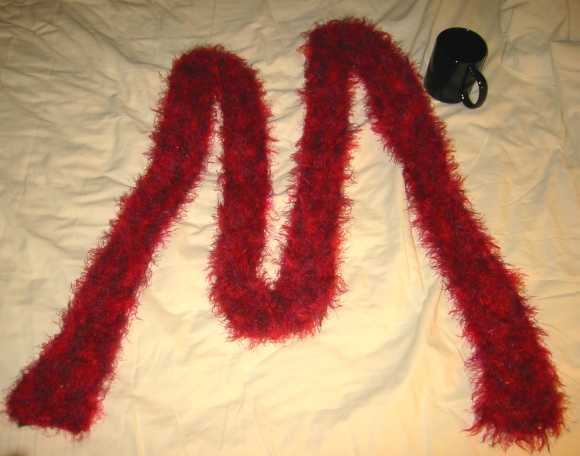 I like both of these a lot. The scarf is very long and almost boa-like. The color is bright and sassy. If I sell no other piece at the craft show, I bet this one will sell.

For the hat, I didn’t realize I had two balls of Kureyon in this nice manly colorway. I’ll finish two hats in this color before the show this weekend. I figure I have plenty of items for women and girls, but wanted more that the women could buy for the men in their lives (men rarely come to these craft shows).

Someone on one of my Knitting Lists asked what to do in Fair Isle knitting when there’s a row with only one color? Do you need to worry about the thickness of the fabric being different since you don’t have to strand two colors for that particular row?

I asked the Fair Isle Goddess, Wendy what she does, and she confirmed in my comments that she just uses one color and doesn’t worry about the thickness. That was what I did on the button band for Ronas Hill on a couple of single color rows.

Another list member offered that he knit two strands of the same color over the single color row, alternating which strand he used and weaving or carrying the unused strand behind. I liked that option, so in the future I will use that method.

I’m not sure if this link has made the rounds on the various knitting lists, but I thought it was funny, especially if you’re a fan of the king.

Marilyn’s sister also forwarded around a very funny Google item that I enjoyed a lot. If you go to google.com and type in “miserable failure” (include the double quotes), and then click on the “I feel lucky” button, check to see what comes up.

I hope Marilyn wasn’t planning on using that on her blog.

Pubah asked if I had done a facing on Ronas Hill (I’m assuming she meant on the button band).

I did do a facing. It was called for in the pattern, and I liked it, so I did. I also thought it would give some structure to the garment. The only thing I did somewhat differently from the pattern on the button band was I did half of the facing rows in Indigo (color called for) and half in the Olive green color. I didn’t want to start the last unused hank of Indigo on the facing, and I had plenty of Olive green left. It gives it kind of a nice look.

Alice mentions what her mother would call “stick-to-it-iveness” with regard to my knitting.

I’m not always quite so resolute, but I have always said that knitting doesn’t take much talent or patience (as many non-knitters think). It takes “stick-to-it-iveness”. At least for me it does.

Jo mentioned the steek on the button band, so I thought I’d explain a little more.

The pattern says to pick up and knit stitches up the inside of the right side of the vest, continue around the neck and then down the inner left side front. Then it says to purl back on the next row.

Since there are 400 stitches on the button band, and it requires two-color, stranded knitting, I didn’t care to purl. So, at the end of picking up 400 stitches, I cast on 10 steek stitches, and then started knitting where I had started picking up stitches.

I knit in the round that way until the two color section was completed, and then switched to flat knitting. for the remainder. That way, the steek was small, and I could tuck it between the facing and the button band when I cut it and sewed it up. It made for a very neat button band.

Richard asks if I ever eat.

I do eat. Quite a bit, in fact. I also exercise 3 times a week to stay in shape because of all that eating. And contrary to what Richard has surmised, I wouldn’t give up sleep if you paid me. I love sleep WAY too much.

I do however knit whenever I can, and devote quite a bit of my “free” time to projects.

Jewel asks if I’ve considered making my own buttons.

I hadn’t until she mentioned it. I will now have to look into how to make small dorset buttons. Or perhaps I could get Kathy to show me when I see her this weekend.

Steeks allow for easier knitting in the round, so you don’t have to account for arm holes and such until after the garment is done.

I’m sure there are many google references to steeking with pictures. Otherwise, you’ll just have to come to my house, so I can show you.

Finally, Carol asks if I got the Ronas Hill kit at Stitches.

Yes, this past year, I got to meet Ron Schweitzer (the designer of Ronas Hill) and bought the kit. It was the most extravagant purchase I’ve ever made there. This yarn is made from the downy undercoat of a Shetland sheep, and then sent to New Mexico for natural dyes (Indigo, Madder, Alium, etc.). As such, they are very expensive.