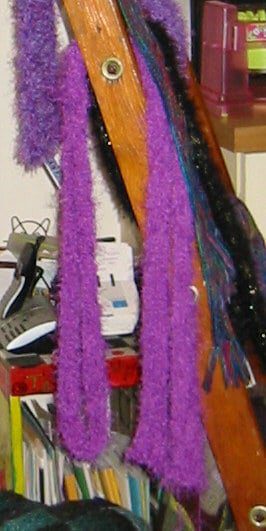 I don’t know how I got hornswoggled into selling my knitwear at the Art/Craft show yesterday.

Overall, the show was pretty lame. Lots of great stuff (including mine, of course), but hardly any buyers came to browse/shop/buy. The host blamed it on the frigid cold weather and the Eagles game, and I think she’s right.

Thaddeus had the great idea to display my scarves, hats and sweaters on an old, wooden, six foot step ladder. 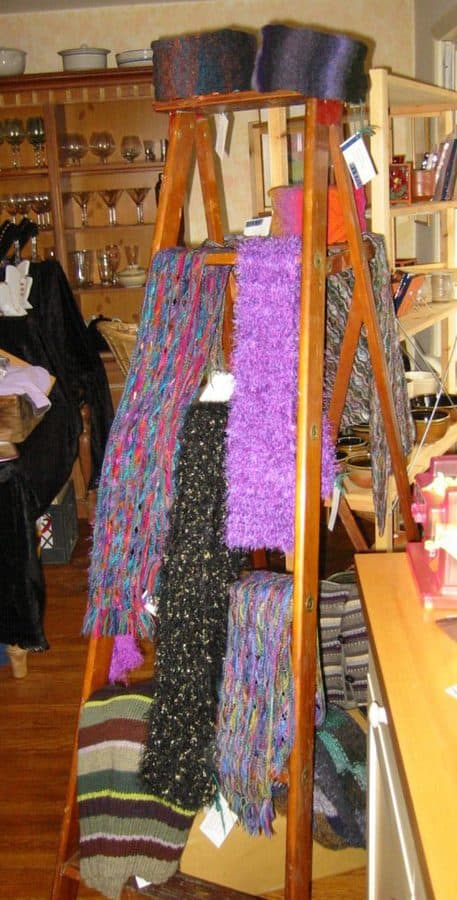 They looked great. I brought 2 Koigu scarves, 4 novelty scarves, 5 Head Hugger hats, 1 Koigu shawl and three sweaters (sales models made for my local yarn store). Despite the low turnout, I ended up selling all of the novelty scarves and one of the Head Hugger hats. Overall, people were pretty impressed with my talents. Here’s one buyer wearing her QueerJoe Original. 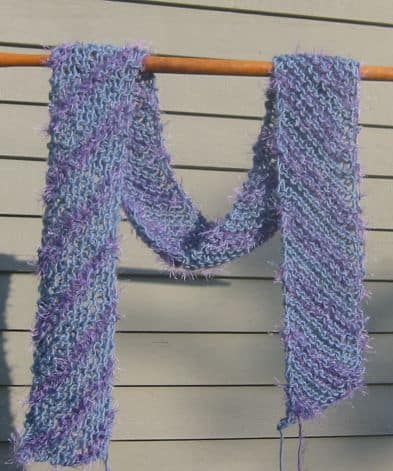 Knitting Progress
Now that all the show knitting is over, I was able to start up on my sister’s sweater again last night. I was pretty beat, so after a short time on my sister’s sweater, I put that down and picked up the alpaca bedspread/coffin cover and did some mindless knitting on that. Didn’t get much done on either of them, so no picture.

Barbie Knitting Machine
After seeing a few web sites and pictures of what folks have done with the Barbie Knitting machine, I’ve pretty well determined it won’t be overly useful. The one high point of the Art/Craft sale yesterday was that I spent time with the host’s 13 year old daughter, and used some Fizz, eyelash yarn in a bright pink on the Barbie Knitting machine and we made her an 8 foot boa/scarf. She loved it, and made sure everyone knew that she made it herself. Here’s a bad picture of it.